A Game of Cylons- Battlestar Galactica Board Game Review 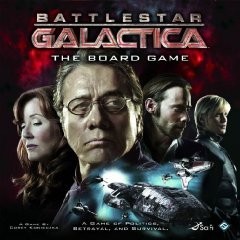 There is no doubt that Battlestar Galactica was the new hotness at Gen Con ’08. I waited in line an hour to buy the thing, sight unseen, when I learned how few copies they had. But does it live up to the hype, and does it offer anything significant other than nods and winks to the fans?

BSG has a mid-sized board which as many have noted is rather bland. Or rather it seems bland at first when you first pull it out and look at it, unaware of the purpose it serves. There is a simple depiction of the Galactica, Colonial One, Viper and Raptor reserves, a spot for off-ship Cylon craziness, and four big dials which depict the human fleet’s morale, fuel reserves, food stores, and population. You get a few decks of cards, a single d8, and a bunch of plastic ships and counters. Overall you get a fair amount of stuff in the box, though not as much cardboard as you’ve seen in many of FFG’s other products.

Players select one of ten characters from the show and place their guy/gal on the board. Everyone has a couple of productive special abilities, and a third that is negative. For instance, Starbuck is a kick ass pilot, but her insubordinate nature makes it harder to fend off allegations of being a Cylon. Once everyone is set up, an Admiral and President are determined. Basically, the first political player gets to be President, and the first military player gets to be Admiral. These roles are critical as there are many events that can occur which require one of them to make an executive decision for everyone else. In addition the President has access to the powerful Quorum deck which allows them to do things like determine a character’s loyalty, or assign people special tasks. The Admiral controls the nukes, and selects destinations during an FTL jump. These are not powers or choices you want Cylons to have access to.

And speaking of Cylons, everyone is also dealt a Loyalty card. These cards must be kept secret and tell you if you are a human or a skin job. Oh yeah, after that you set up a Cylon fleet on the board. That’s right. The humans start the game under attack. Believe me, when this game starts it does not let up until the very end.

Player turns work like this: Player draws a number of cards determined by their character. There are five color-coded decks to choose from like Politics, Piloting, or Engineering. Most cards have special abilities that can be played, but they’re usually reserved to resolve a Crisis. Player moves character to any space on the board he wants. The exceptions are he can’t voluntarily move into Sick Bay or the Brig, nor can he leave the Brig of his own accord. Players can move between Colonial One and Galactica if they want, but they’ll have to discard. Each space lets you do things like go to the armory (used for fighting off boarding parties), use the FTL drives, launch Vipers, or do more daring things like call for a new election or accuse someone of being a Cylon. Each player also gets one action. That action can be to use a space’s special ability, play a card, or use one of their character’s abilities.

After a player’s turn a Crisis Card is drawn. A crisis lists some horrible new event in the lives of the human refugees. The crisis is described, the means to overcome it are listed, and the penalties it carries are also given. To overcome a crisis players must beat the Crisis’ target number, and they play the color-coded cards in their hands (each with its own value) hoping to meet or beat the goal. If they succeed, they get… well, nothing. But if they lose, they’re going to watch the Morale, Fuel, Food, or Population dial go down, and sometimes you lose a little from multiple dials.

This is where the secret Cylon players get to first step in. Each crisis requires certain color types to be resolved. A water shortage might require blue and purple cards for instance. If the Cylon player contributes cards that are not required, the points they contribute are subtracted from the total. Of course a couple of random cards are also thrown in just to help the Cylon cover his tracks. All the cards played are shuffled, and then the outcome is revealed to the group. Nothing pisses players off like dumping tons of resources into a crisis, only to discover they’ve been sabotaged. And thus the mindfuck begins. BSG gives the human players just enough to get by. They will always be scraping and fighting for survival (much like the show) and they have so much to lose. If any of the dials hit zero, the game is over, and chances are good the humans will lose something almost every player turn.

If Galactica is destroyed, the game is over. If Cylon boarding parties are given enough time, the game is over. The only way the humans can win is to find Kobol. To do that they must jump many times using their FTL drives - but working out the next jump takes time. Given time, the ship will jump with minimal cost to the humans, but every turn they wait horrible things are happening and they lose resources. If they jump early, there’s a good chance they’re going to lose people along the way.

The Admiral secretly selects the planet the fleet arrives at from two cards. Think the planet your Admiral chose is crap? Maybe it was the best of two choices. But then, maybe he’s a Cylon. So you’re a Cylon player and you’re having a splendid time making the humans miserable. But what do you do when they get wise and throw you in the Brig? Why blow your head off of course. A Cylon player may choose to reveal themselves, at which point they vanish off to the Cylon portion of the board. From there they can oversee the launch of more Cylon attacks, and play Super Crisis cards – cards so horrible they’ll make even the most stalwart human player slump in their chair. Of course a good Cylon player never ends up in the brig, and if you can reveal your loyalty on your own terms, you can leave the Galactica in chaos.

There’s combat too. Cylon fleets will pop up from time to time, and while the combat rules feel like an almost different game compared to every other element, they are simple and effective. In combat pilots can launch themselves into space and help the Vipers fight the good fight, mechanics can repair ships, and others can man Galactica’s own defenses. But there two big aspects to combat: bring down the heavy raiders and protect the civilians. Cylon raiders will destroy civilian ships given a chance, and those losses can end a game very quickly (they drastically reduce the Population dial). Heavy raiders will try to board Galactica so the centurions can vent everyone into deep space. Base Stars of course, just try to blow the crap out of Galactica, but that’s not the easiest of tasks.

Playing BSG is a fantastic experience, but one that depends heavily on the players. An idiot Cylon player can make things too easy for the humans, either by not doing enough, or by being revealed too quickly. Humans who aren’t on their toes will find themselves without hope faster then they may like. And of course in a game like this, it’s all about milking the tension and mistrust for everything it is worth. It is fun being a Cylon, but I find it just as much fun to try to figure who the Cylon is. In one game I played in the Cylon player was so masterful in his deceit that he had us running in circles, throwing the wrong people into the Brig, and running our resources down to nil. He was our buddy the whole time, offering great advice, but at the same time taking every opportunity to twist the knife he had in us.

This is a fun game, and with fun players it becomes an amazing experience. I like this game a lot, but there are two questions I keep hearing. Can people who don’t like the show enjoy the game? The game seems so simple – can it have high replay value? I have played a couple games now with people who have not seen the show, and they seemed to have fun. A well made game after all, is a well made game. As for replay value – I honestly don’t know. It is true this is a relatively simple game. Will people adapt their strategies as they play it more? Of course. But I cannot believe that unless you are playing BSG on a ridiculously frequent basis (in which case you probably need more games), it is going lose its fun. You see, this game is not about the actual game mechanics, or playing cards, or fighting battles, but is rather about the people who are playing it. I think if this game loses its fun factor it is more due to players than the game itself. This is a game that presents some rules that allow people to have fun manipulating and stabbing their friends in clever ways, rewards liars for their perfect poker faces, and I have had a blast playing it.

The first time I played, and my group faced its first crisis, and after we revealed the cards that had been played and realized someone had without a doubt sabotaged us, we all swore. But then we started laughing, because at that moment we all became suspicious, sneaky sons of bitches in each other’s eyes, and we knew we were in for some fun. This thing could have easily been made into an $80 coffin game. At $40 it is a bargain. Grab it when it comes out.