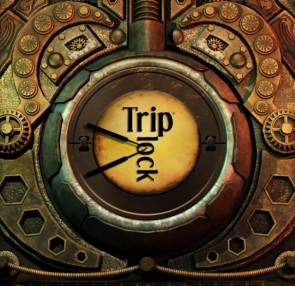 Game Name
Triplock
Publisher
Chip Theory Games
Designer
There Will Be Games
Inside the box lid, there's a face looking back at me. Underneath the rules is a selection of components so odd as to immediately pique my curiosity. Small stacks of shiny poker chips, a rolled up neoprene board and a pair of custom-printed dice aren't the half of it. All the cards have some weird backing that makes them as glittery as fish scales and twice as slippery.

Even more slippery are the rules. They're short but after a read through, I have no clue how the game works. So I pull out all the components, set up a game, and try again. Still, nothing. In the end, I'm reduced to watching an explanation on YouTube. It's actually pretty simple, but with mechanics as odd as the components, it's small wonder it's tough to describe.

Essentially the chips are set up in four stacks of three, representing a lock. Each has a double-sided mechanism chip sandwiched between two failsafe chips. So you can't see what mechanism is where, nor which way up it is. Your job is to crack the lock by finding out what's hidden and rearranging the stacks so they match a predetermined sequence.

Having been so baffled by the rules at first, I start with the solo game. This puts in me in an indistinct but interesting Steampunk setting, trying to work my way through a series of lockboxes in a mysterious station. In the first of four challenges, each with a narrative frame, I line up a given sequence of mechanisms before all the failsafe discs get removed. It's all done with the dice, so I pick them up and go to it.

You can take the two actions you roll, things like peeking at mechanisms or flipping stacks, or trade them both in for one of your choice. My first roll lets me peek underneath two failsafes, and remove another. Choosing which stacks to look at is easy: of the for on the board, one is in a "hidden" area and you can't interact with it. Still, I can now work out where all the symbols I need are. They're in the wrong order, of course, and one is upside-down.

At the end of the turn, all the stacks move along one space and one failsafe gets removed. So the hidden one swings back into play, replaced by the next stack in sequence. As I reach out and slide them along the slick mouse-mat surface, feeling the discs wobble and click beneath my fingers, there's a sudden thrill. It feels, quite literally and physically, like picking a lock. Groping into the unknown, sensing the tumblers shifting and snapping into place.

Unlike picking a real lock, there's a big memory element here. You might presume it was easy enough to track four discs. But because they're double-sided, you kind of have to track eight. And they move each turn. I try to line up the complex dance in my head, tapping them and muttering their contents over and over. With a failsafe coming off each turn, showing the mechanism to the world, it's not too hard. A couple of turns of sliding and flipping later, I have the right symbols in the right order.

The second scenario is the same. Except this time, no failsafes come off and you're on an eight-turn time limit. Seeing as it's the same problem I dive right in and smash my head on the rocks. With all failsafes in place, the memory challenge is much harder. Symbols leap around my brain as I try to recall what's where what way up, and how I can work around the one in the hidden area. After six turns I'm confident I've done it, so I flip the failsafe on the very first stack and immediately see I've failed.

Still, it's enough to try to teach the two-player game to someone. That proves easy, the rules flowing more smoothly from mouth and demonstrating fingers than the written rules. In this version of the game, we make more use of those glittery, slippery cards. Around each edge, they show different symbol sequences, the harder ones worth more points. I have to choose which I'm going for, so I pick one of medium difficulty and hide it face down.

This time, the lock doesn't move stacks by itself. Instead, that's my opponent's job. She begins to flip and rotate those lovely pieces. And within a couple of turns that ballet of plastic is far more confusing than the predictable patterns of the solo scenarios. We're playing a tug of war with poker chips, pummeling the pieces like the tangible stand-ins of a battle of wills. It's compelling, absorbing and feels absolutely impossible.

As if that wasn't enough, there are mind games, too. On my second turn, I roll a card action, meaning I can flip or rotate a card instead of a stack. What do I do? Change my objective on the fly, or mess with hers. Obviously, it's the latter. But as my fingers close over her card, I hesitate. I remember that in the deck there are trap cards, too. They go off when certain conditions get met - like getting flipped - and buff their owner. The card's owner offers an enigmatic smile as if reading my thoughts. The chances at are low, and that looks like a bluff, so I go ahead and flip.

Naturally, it's a trap. She smirks and scoops the reward, an extra card. I curse, suck my burnt fingers, and we carry on.

Despite the trap, I win. It's taken such a short time that a reset is inevitable. Soon, we're probing and pushing our tools, feeling our way around the lock. This time we make more use of our character's special powers. Each turn you can either use this or place a marker on the board, sliding toward extra actions or points. It's an extra piece of strategy atop the mechanical puzzle.

We forget that you can swap your rolled actions to pick one and keep rolling failsafe removal. As a result, the mechanisms are quickly revealed and the game becomes a whole lot less interesting. It's an unfortunate flaw, but one that seems unlikely to get repeated often.

In solo games since, I have still been unable to beat all four scenarios. After playing I lie in bed and half-remembered bits of order and orientation flash across my dreams, glittering like the card backs. Yet still I keep sticking my fingers into that lock, wanting the feel of those pieces, turning them over, trying to force them to my will. But, like trying to pick a real lock, force is no substitute for skill and the sweet promise of well-earned achievement.