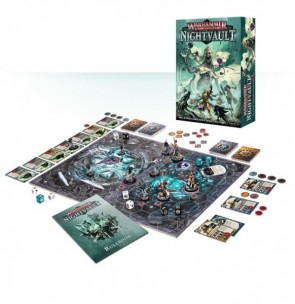 The 2nd season of Warhammer Underworlds is upon us.

Well, it turns out that the game was actually called Warhammer Underworlds and not Shadespire. We've been wrong about it for a year, and now the new "season" has started with an all-new starter set called Nightvault. I gave Shadespire- excuse me, Warhammer Underworlds- a five star review in Miniature Market's Review Corner and listed it among the best of 2017. It was, and remains, an absolutely smashing head-to-head skirmish game with a smattering of CCG-style play that satisfies competitive and casual players alike. One of the things I especially love about is that it invites you to collect and paint models for factions you don't necessarily want to go all in, 2k points on. And the push-fit models are actually some of the best that Citadel has to offer in the Age of Sigmar line.

So Nightvault is here, and it ties right into the recent Soul Wars storyline (yes, that whole Necroquake thing). Nagash has opened up the titular Nightvault, a sort of Katophrane prison where these death-defiers conducted magical experiments on their prisoners. One of the warbands in the new starter set is a gaggle of angry ghosts released from the Nightvault- some Chainrasps led by the Briar Queen and her lieutenant Varclav the Cruel. On the opposition is a group of three Stormcasts of the Sacrosanct chamber, spell-slinging warriors clad in Sigmarite tasked with searching for Shadeglass in the Mirrored CIty. Both of these groups can also be played along with their respective factions in the Soul Wars box.

I'm especially fond of the Nighthaunt warband, Thorns of the Briar Queen, and they have become one of my favorites in the game. This is a really aggressive, fast-moving force with lots of bodies (well...) and their mobility allows for some fun swarm tactics. They are a little fragile, but they Inspire easily by beginning an activation next to an enemy model and I think their force-in-numbers advantage makes up for it. I also really like many of their faction-specific objectives, which play to their strengths well. I think with the right finesse, this could be a very competitive warband even against the stronger ones from season one. The models are just fantastic- if you've seen the awesome Nighthaunt models from the recent release, these are great variations on them.

I'm not quite as enthusiastic about Stormsire's Cursebreakers. I generally like Stormcast, I appreciate that they are sort of the boring "lawful good" faction, and the addition of the Sacrosanct Chamber's Sequitors give them a bit of a magical punch that's a little more compelling than the ol' hammers and shields thing. But there is nonetheless a sense that this team is kind of a "same but different" deal. Like the other two Stormcast factions- the previously released Eternals and Vanguards- these guys and gals are tanky like the former and with some ranged abilities like the latter. With only three models, you need their durability and their reach makes up for their slower pace. But all of this is standard Stormcast fare. Where this faction really comes into its own, however, is in leveraging the new spellcasting elements of season 2. All three of these Sequitors are Wizards so they can all cast spells. This warband inspires when they successfully making a casting roll.

Now, the magic system introduces a whole new angle to gameplay, but it does not require much rules overhead and it all slides in nicely with the rest of the system. There are Spell Attacks and Gambit Spells that require you to roll a new set of magic dice to determine the success of your spell. You roll dice equal to your caster's level, which is generally between 1-3. There are also scatter effects, which use a template hex to determine where a lightning bolt or whatever travels. The unpredictability is fun, and I also really like how the spells open the possibility for things like enchanting weapons, creating obstructions, and other fun temporary effects beyond what is usually possible with the Gambit and Ploy system.

The other big add was actually already in the Shattered City board pack- lethal terrain. These are hexes that deal damage when you move or are forced to move into them. Naturally, in a game where shoving models around is a thing, this creates some hazardous situations and encourages some fun body-slamming action. The new boards feature some of these spots, and there is also a new Arcane Hazards terrain kit you can pick up to make these 3D if that's important to you.

In all, Nightvault is a great start to season 2 and I think it's a better way at this point to get into the game than Shadespire, if only because it is the current state of the game with the magic suite included. It's self- contained and not an expansion. I'm also more partial to Nighthaunt than Khorne Bloodbound, so that's another point in its favor over the original Shadespire box. But what is more exciting than this new starter, to my mind, is the slate of upcoming warbands. Next week preorders start for Eyes of the Nine, a Tzeentch warband (YES!) and Zarbag's Gitz, a wily looking bunch of Moonclan Grots. There's a Sylvaneth one on the way, with a total of 8 new warbands planned for the Nightvault season. This is all quite exciting- I can't wait to see the models and see how they play for these groups.

I'm very happy that Warhammer Underworlds has been successful for Games Workshop and that they are continuing to support it as a full product line. It's a unique game in their range, and it is one of the best on-paper designs the company has produced to date. It is competitive and compelling, almost ruthlessly fast-paced and dramatic. The objective system is brilliant, the dice-based combat dramatic, the deckbuilding interesting without being overwhelming, and it offers plenty of Warhammer atmosphere. Nightvault is another argument that we are living in the Golden Age of Games Workshop.

Hadik replied the topic: #282680 04 Oct 2018 05:42
I am a little annoyed by the push fit chainrasps. The seams are on the tops of the models. I plan to paint them and I’ve got to get some liquid green stuff If I want them to turn out decent.

Michael Barnes replied the topic: #282722 04 Oct 2018 19:45
If they are giving you grief, you can try cutting the posts and sockets off and just gluing them like normal. Usually they don't fit flush because there's a micron or two too much polystyrene somewhere.