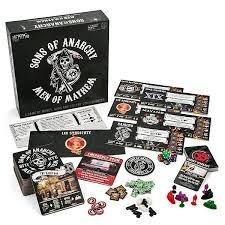 Diving into the Discount Bin, looking for Diamonds.

I’m a sucker. I mean, I am a sucker for discounted games and, at the same time, I’ve been suckered into buying some bad games. I live on the outskirts of St. Louis, which puts me within roughly 45 minutes of the retail outlet of Miniature Market. Not only is it the home of the famous (infamous?) ding and dent section, where damaged games are given deeply discounted prices, but it also tends to have in-store sales of overstocked items.

When my wallet allows, I’ll make the trip to MM with a few things in mind that I definitely want to pick up…and I usually come back with a couple of extras. I usually try to keep my spur of the moment purchases to less than $25.00 per game. These are my dives into the world of what is “On The Cut.” Maybe you can be on the lookout for them, or simply look out for them, as the case may be.

Sons of Anarchy: Men of Mayhem

Sons of Anarchy was a cultural phenomenon here in the Midwest. I chalk it up to the fact that the modern American male midlife crisis is required to involve a Harley Davidson. I had watched a few seasons of the show but drifted away from it. Even so, I was surprised to see a Sons of Anarchy boardgame, especially one that wasn’t trivia based or a Monopoly reskin. The discounted $20.00 price tag, along with the Gale Force 9 logo, was enough for me to take the plunge.

To say I was pleasantly surprised would be a vast understatement. The gameplay is part worker (biker?) placement, part area control. But when you start explaining it, you suddenly turn into a bad infomercial spokesman. “But, wait! There’s more!” There is market manipulation based on supply and demand. There is resource management built around the recruiting of new members. It has varying degrees of combat: Do you want a simple knuckle dusting brawl or do you want to throw guns and deal with the heat that comes down with that? It has round modifiers that can be as simple as short term goals that earn you a reward or ones that will change the landscape of the rest of the game. When you draw too much attention from law enforcement, are you ready to send one of your members to Shawshank to take the fall? Truces, negotiations, alliances, betrayal: It’s all on the table and you can indulge in it or ignore it as you see fit. Still not “Gamey” enough for you? Switch to the included “High Octane” rules for asymmetrical powers for each Motorcycle Club.

You will find some “adult” themes in Men of Mayhem as it is about guns and “contraband” and the victory condition is about ending with the most cold, hard cash. It also happens to be one of my teenage daughter’s favorite games. She has no problem differentiating between fiction and reality. Besides, she could care less about the theme and has never watched the show; she just enjoys playing the game. On that note, I would literally be shocked if Gale Force 9 doesn’t use the gameplay found in SOA in a future release. While it fits the show and theme perfectly, I can see it being adapted to other IP’s.

If my verdict wasn’t clear enough: It was money well spent. My next trip to the game store, I picked up the Grim Bastards Club and Calaveras Club expansions. Yes, my $20.00 game became a $40.00 game but it allowed me to expand my player count to six and each expansion included some new, optional, rules to toy around with. I’ve actually seen some posts about Ollie’s (a discount store) having the base game packaged with the expansions for around the same price as I paid.

With the upcoming Mayans Motorcycle Club series coming to FX, we might see a resurgence of SOA fever. I did a quick check online before publishing this article and SOA:MOM is currently selling for 12.freaking.dollars. at Miniature Market (I picked mine up a few months ago). I’m not going to tell you to run and grab it but I will say that I’m tempted to buy some additional copies to gift to friends.

Shellhead replied the topic: #282889 09 Oct 2018 10:32
I agree that Sons of Anarchy is an excellent game. It isn't an easy sell, because gamers tend to be repelled by biker culture. But when I get the game on the table, ameritrash players enjoy the theme and direct conflict, while eurogamers excel at the worker placement and making money. It's funny that you speculate that this system could easily be re-themed by GF9, because they have already done so: icv2.com/articles/news/view/40663/gale-f...s-dragons-board-game

Shellhead wrote: It's funny that you speculate that this system could easily be re-themed by GF9, because they have already done so: icv2.com/articles/news/view/40663/gale-f...s-dragons-board-game

I thought that this looked like it might be a re-theme but it has additional "stuff." Maybe they used what they had in the works for the "Luck of the Irish" SOA:MM expansion that was cancelled?

I have a long history dealing with the bandidos in texas, and none of it was a good time. So to reinforce Shellhead's statement, it's a hard sell during the best of times.

I'm glad it's being rethemed. It is a good game mechanically. But I'd really rather not glorify biker gang culture. The show didn't show half the stuff that makes it so utterly deplorable.

[edit] This article reminds me that I need to pick up Spartacus soon. It's just a great game that deserves to be in hardcore ameritrash collections. And my collection is sleek and made of metal. *Devil horns sign*

The writing on the show sucks.

Colorcrayons wrote:
[edit] This article reminds me that I need to pick up Spartacus soon. It's just a great game that deserves to be in hardcore ameritrash collections. And my collection is sleek and made of metal. *Devil horns sign*

Spartacus is on my list for a future discount dive as it is at holy Shit, that's cheap price. May your ameritrash collection always remain shiny and chrome.

Msample wrote: I don’t know you’ll ever see Spartacus that deeply discounted, at least not new. I think it’s been out of print for awhile.

I saw it a few months ago as a close out for $20.00. A quick check now shows that supplies have diminished to the point where you can't find it.

sornars replied the topic: #282976 11 Oct 2018 06:01
Also the first expansion for Spartacus "The Serpent and The Wolf" is totally unavailable from any source. The second one "The Shadow of Death" seems more readily available. I'm curious as to how Spartacus compares to the X-Men re-theme.

On Sons of Anarchy: This is definitely one of the best £10 I've ever spent and I do enjoy the biker theme; however, I'd be happy if someone in my circle picked up the D&D re-theme so I can compare.

Pat II wrote: I had to be in St Louis 4 times last year and really enjoyed going to MM and perusing the ding and dents or discounted items. SoA is a great game.

Since they opened the new location, they have had some ding and dent "garage sales." Literally at least a hundred people lined up when the doors opened. I love the section but I'm not down with black Friday type of insanity.

drewcula replied the topic: #283133 16 Oct 2018 08:46
I adore both Spartacus and Men of Mayhem. I own it all. ALL OF IT. Expansions galore for both glorious games.
Men of Mayhem doesn't see enough table time. Spartacus gets the lion's share, and it's no one fault but mine.

Funny thing, but sometimes... SOMETIMES... I think Men of Mayhem may be better than Spartacus. MoM essentially has a built-in timer that never allows the game to out-stay it's welcome. A rousing game of Spartacus with six players? The rousing can go sideways after three hours of backstabbing.