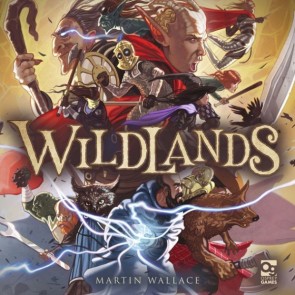 The more Martin Wallace tells me about Wildlands, the more impressed I get. It's clearly built on his wargaming roots but has evolved to become a quick-playing asymmetric game of fantasy combat. He tells me it's easy to learn, playable out of the box, but with plenty of mechanical depth.

Some months later, the real Wildlands causes me wild excitement when it drops onto my doorstep. Riding a ridiculous high of enthusiasm I decide to put the "playable out of the box" bit to the test. Eldest daughter gets dragooned into my opposition. She picks a faction of wizards with their book-toting golem, largely because it includes a humanoid owl called Hugo. I grab the other miniatures and their card deck from the tray, a motley bunch of mercenaries.

We open the rulebook and find, inevitably, it's not playable out of the box. You do have to read the rules first. The game is simple but the rules are not well laid out. It's hard to find clarifications.

Still, it doesn't take long to get going. Each space on the dungeon board bears a number and we start out with ten number cards each. Five we secretly assign to our characters as starting spaces, although they don't appear on the board yet. The other five we swap, and they become the spaces where our teams' crystals will go, sparkling lumps of plastic worth a victory point each.

Having no idea what I'm doing, I reveal a character near one of my crystals by placing its miniature on the board. Then I realise that my hand of action cards which I'll use to power the game don't match that character at all. Each has a grid of character and action symbols like melee or magic attacks. Playing a card means you can take that action with the matching character.

Cursing, I reveal another character so that I can actually do something. Then another, as I realise that since you draw three cards a turn you ought to play that many.

My daughter doesn't seem to quite grasp this is a combat game where you earn points from knocking out characters as well as crystals. Her wizards are fast and have the potential for deadly ranged attacks, but they're fragile. So she puts them on the board and runs away.

Given this regrettable misunderstanding, our first game is brief. It takes a while to learn to manage this handful of icons but after a while it becomes smooth. My mercenaries are brutal in combat so that's what I go for. They swing into action, hunting down and butchering the weak wizards. There are no dice: each attack icon has one or more defence icons and so it becomes a case of a card for a card.

What the wizards should be doing is playing interrupt cards. These are a bit like opportunity fire: you can play one after an action to take over for a bit, playing cards until your opponent's turn resumes. These would give the mages the chance to flee and counter-attack but it doesn't happen. I win a quick, bitter victory and daughter walks away, unimpressed. I am not unimpressed. There is clearly a lot here to work with. I need to find an adult opponent.

I find it in my usual foil for Star Wars miniatures. We unpack and pick some different factions. He goes for a band of clockwork gipsies, whose deck has a lot of rally actions that allow adjacent figures to get activated together. I pick an expansion, some undead, who have an unusually flexible deck but find it hard to capture crystals. Looks like I'm going to be playing the butcher again.

After going through the rules, my opponent comments that it sounds a lot like Shadespire. Which it does, but Wildlands has a lot more under the hood. Without deckbuilding, it's easier to pick up. Without dice, it feels more strategic. With a much bigger board, it feels more open to variety.

It starts out well. The flexibility of the dead lets me snaffle an early crystal. Their plethora of attacks means I can then use another character to hunt down and kill a poor ranged character with only two health. But then, then the fun begins. His team targets my lone crystal-gatherer and start to shadow him up and down a corridor, playing ranged and melee attacks. I have the cards to block the first couple but then, on my turn, I'm short of ones to move away.

Over the next few plays, it becomes a deadly, thrilling cat and mouse chase. The pressure on my hand is enormous: some factions have lots of additional card draw but the dead have little. But he's in the same bind. Each turn requires a moment's planning on his part to maximise attack chances. I'm on tenterhooks waiting to see what pain is coming and whether I can block it.

One damage gets through. Then two: one more will finish that zombie. I'm out of cards but then, so is he. At the glacial pace of three cards per turn, we start to refill, but all I have to do is move - he needs slightly rarer attack icons. Inch by agonising inch I get away. The whole sequence has been intense, cinematic, almost with a touch of Wiz-War. A little less creative card play perhaps, a whole lot more strategy and just as much tension.

Deprived of his prey, he sets to work making the most of his faction abilities. They have rally actions, which means two adjacent characters can move with a single card. Since his crystals have been sensibly scattered around the map, he can reach some and suck them up with relative ease. Within a few turns and a few more rounds of combat, it's four points all. First to five wins.

He's closing in on the crystal he needs to win. I, though, have two advantages. Firstly I have an unrevealed character in the adjacent space, whereas all of his are on the board. Second, he's blown through a lot of combat icons trying to kill what's already undead, whereas I had some in my deck to spare. Now, they're in my hand.

As he closes in on that last point I drop an interrupt and reveal my last warrior, a skeleton with an axe in its head. I play a one-strength attack to draw out a block, saving the two-strength one in my hand. He blocks the first, then I slap down the second and wait, tendons tight, to see if my gambit has been successful. With each shuffle of his cards and a muffled curse, I'm more and more sure it has. He slaps the lot down with a satisfying bang and concedes.

We sweep the two-sided board and flip it to the wilderness map. This has terrain elevations but now the rules are down, the extra is simple. There's a brief discussion on an option from the Dead expansion that allows killed characters to rise as zombies. But we don't really understand the rules and we're itching, burning to get grappling again. I unfurl my cards and start plotting the things I have to manage: deck and hand, attack and defence, mystery and manoeuvre. It's a lot to juggle, but without a plethora of rules to slow me down, it's a challenge I'm very much looking forward to.

Shapeshifter replied the topic: #283347 19 Oct 2018 10:38
My only pre-order for Essen this year.
I have always been looking for an elegant low-entry skirmish game that had a fantasy setting and interesting mechanics.
This seems to be that game. Have high hopes I can get people to play Wildlands who usually don't digg combat-heavy games.
Read More...