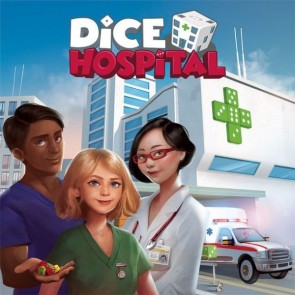 Humanity packs the convention hall, a sea of nerdy sardines. But the most packed bit of all is the tables demonstrating Dice Hospital. Again and again, I pass by and there's no space. Twice I play other games by the same publisher while I wait, and nothing comes up. It's a frustration that builds over the two days, then drags sullenly into weeks while I wait for a release.

So when the box arrives, it's an explosion of excitement. Inside there is an explosion of dice in three primary colours. The sprues spew out tokens and hexes in lovely isometric hospital art, reminiscent of the classic PC game Theme Hospital. There's a solo game, so I get stuck in.

Each turn, I draw random dice from the bag, roll them, then choose three to accept into my hospital. I have three nurses which I then assign to various treatments in a solo-style worker placement affair. One of my dice is yellow, and assigning a nurse to Oncology lets me add a pip to it. Another shows a two, and I increase it to a three with a nurse in Intensive care. Three dice, three nurses, so I can treat them all.

I also get to choose a hex to add to my hospital or a new pawn to work there. I've got two green dice, so I choose a Virologist, which lets me treat two green dice at once. He comes in handy on turn two, taking care of those emerald emergencies while three new patients arrive at my ward. I can only cope with twelve at once, so I need to discharge dice. If I can get one to six in value and treat it again, it's healthy and can go home for points. If one doesn't get treatment on a turn it goes down one pip, and dice already on one die for a point penalty.

Solo play is about trying for a high score, but it's a good way to learn the rules. It's fun trying to work out the best way to use your various hexes and workers each turn to cure all your dice. But it seems oddly easy. There's no real pressure on pushing dice through your wards. You get exponential score bonuses the more dice you discharge on a single turn and that's where the game seems to be.

I idly flip through the rulebook again, and spot I've made an error. Not only do you take three dice per turn, but you also start with three already in their cardboard beds. That looks more challenging. So I scratch out my previous score and start again.

Right away, I can't treat all my patients, so some start to get sicker, spots dropping off them like smallpox. Then more arrive. Terrified of falling further behind the curve, I grab a radiology hex that lets me treat three low-value dice with just one nurse. That keep everyone stable that turn, but next turn I don't have three low-value dice anymore. And more have arrived. Wooden medics dash desperately through cardboard corridors, trying to stem the rising tide. It isn't long before my first death. It isn't much longer before I'm getting more penalties for turning new dice away from my overflowing, plague-ridden wards.

It's all I can do to stay afloat, let alone worry about maximising points. My second score is barely a fraction of my first. And my, but the panic and the pressure and the white-hot stress are glorious. It goes straight in the bag for the next game night.

Teaching is easy: nothing like a course in medicine. The few fiddly mechanics pale before the simple idea of raising and lowering the scores of dice. So, soon, we're stuck in. Patients rolled at the start of each turn as assigned to ambulances of three, and we each pick one. The last ambulance gets first pick of new staff or treatment rooms. There's immediate jostling, joking and arguments to try and get the best spoils of both.

Then it's heads down to make the most of your resources to treat those patients. As the game spools out over the first few of eight rounds, it becomes clear what's so fascinating about this. It's a dynamic puzzle of almost endless variety. As you get more pawns, more rooms, more dice of different colours and scores, options explode. Picking the best course through this medical minefield feels close to impossible. By turn four, my palms are sweating.

Right, so if I put my Paramedic *here*, she can treat, *this* and then if I send a nurse to immunology he can treat *that* but then I'm at risk of a death. Wait, didn't I recruit a haematologist this turn to make sure that red die didn't die? Yes! That was the plan. So, let's start again. If I put *this* right *here* then ... hang on. Where and on what scores did all these dice start?

The ease with which I could inadvertently cheat cuts through my concentration like a scalpel of guilt. I pause from trying to rearrange my playmat and look up. All the other players sit, lost in their own worlds, trying to do exactly the same. No-one's checking to see whether they're actually sticking the rules or not. Everyone is talking, muttering curses and whispering solutions, but they're talking to themselves.

I try my best to reset my turn, unsure as to whether I've got it right or not. In some ways, it barely matters. Trying to tease this ever-increasing tower of tottering complexity into stay upright is what this is all about. If you shift the parameters about a bit by accident it doesn't matter a whole lot: it's still going to fall if you're not careful. And like most teasing, it's oh so addictive to engage with. But as I look back down to try and nudge my cubic charges into shape, I kind of wish I could be teasing my opponents instead.

October 12, 2018
Rating
4.0
Dice Hospital
Dice and hexes combine to create a near-infinite array of entertaining puzzles with an engaging overlay of hospital theme, but it lacks the lifeblood of interaction.
MT
Matt Thrower #1 Reviewer 286 reviews