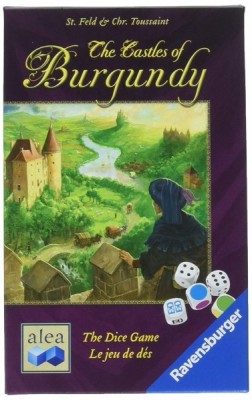 Game Name
Castles of Burgundy: The Dice Game
Publisher
Ravensburger
Designer
There Will Be Games

All the dice...half the excitement.

I have a confession to make: I don't love dice. Or rather, I don't love dice the way some other gamers do. For them, it seems like rolling a fistful of bones is an ecstatic, near-religious experience. My own feeling is pretty neutral--I like 'em just fine, I guess.

Some games, however, can create a fervor for dice with their own cleverness, even if it's just for the length of a play. The Castles of Burgundy, Stefan Feld's 2011 opus, makes me love dice. I love the way your roll narrows an overwhelming field of possibilities into a few tough decisions. I love the way you can see an opponent's roll and despair, knowing that they're gonna take the last castle tile that you so desperately need. I love that you're given a few key tools that let you manipulate your garbage roll into something golden (making you feel like a dang genius in the process). So, when I heard that the Castles of Burgundy was being shrunk into a quick-playing dice-based adaptation, I was intrigued--after all, Castles knows dice.

The Castles of Burgundy: The Dice Game has a small footprint and requires almost no setup--each player takes a pencil and a sheet with a map of their duchy, the dice get rolled, and you're off to the races. Like its bigger cousin, the game is all about completing colored sections of the map to score points. Each turn, the players take a look at the shared pool (2 colored dice, 2 numbered dice, and an hourglass die that acts as a game timer) and use a pair of dice to mark off a hex on their map. Each type of hex has its own requirement to be claimed, as well as a unique bonus you get when you complete a section of linked hexes. For example, you can claim monastery spaces by pairing a low number with a purple die; complete a monastery section and you get the ability to change a single die to the color of your choosing. Players keep on doing this, roll after roll, until the timer runs out and points are tallied.

I have to say, the game and I started out on the wrong foot. When playing the Castles of Burgundy: The Dice Game, I did something I almost never do--I looked at a printed rule and thought, "I will never, ever follow this rule." The rule in question is that only one player (the owner of the game) rolls the dice each round. This is a bad, bad rule. If a friend introduces a game to me as a dice game and I am not allowed to roll dice then I immediately know two things: one, that game is not, in fact, a dice game; and two, that person is not actually my friend.

Of course, it's not deeply important to The Castles of Burgundy: The Dice Game that only one person do the dice rolling--it's that, based on the rules, it really doesn't matter who rolls the dice. You just need a common pool to work with. But I would counter that, even if it mathematically or practically shouldn't matter who is doing the rolling, as a person playing a game it matters very much. Each roll is a moment of drama and suspense, and if you're the one who gets to do the rolling, then you become an agent of this suspense. Roll favorably, and the table cheers for you; roll poorly and prepare to hear a chorus of groans.

The choice to not emphasize these suspenseful moments, to favor expediency and mechanical neatness over human drama, is at the heart of this game's design ethos. It's a clever and functional game that manages to miniaturize just about every aspect of the original Castles of Burgundy into a small, easy-to-teach package. However, in doing so they've sanded away most of the interesting, competitive edges that makes the original such an engaging experience.

In fact, the game is so slick and frictionless that it often feels like it's playing itself. Despite the array of special, game-breaking abilities, I found that most turns the dice landed in such a way that the best move was more or less obvious. Roll. Look at the map. See a possible move. Think hard about all the other possibilities. Go back to your original move. Mark a space. Look around the table. Everyone else has marked the same space. Sigh.

There are moments of interesting decisions, branching paths that let you make use of the powers you've been hoarding to chart a new course away from the deterministic dice rolls. I defy you, blue die! You are now an orange die! Tremble at the power of my monastery! Unfortunately, these moments are few and far between, and when they do occur, they're largely solitary. And don't expect other players to admire your brilliant move--they're busy staring down at their own map, trying to concoct their own brilliant move. With player interaction limited to a race for a few bonus points at the end of the game, there's not much incentive to care about what your friends are doing.

I'm worried that this may all come off as a little too negative. In truth, playing The Castles of Burgundy: The Dice Game is a perfectly pleasant thing to do. I didn't dislike the time I spent with it, and there's something satisfying about putting pencil to paper to scratch out your own little empire. However, the game sits in a weird space. It's just thinky enough that you'll spend the majority of your time in quiet contemplation--it's not the sort of light game that you could easily play while having a conversation over coffee. But the game doesn't reward this concentration with a rich or interesting set of decisions (at least not often enough).

The Castles of Burgundy: The Dice Game is fun, in the same way that playing a decent cell phone game can be fun. It gently scratches the puzzly bit of your brain in a snack-sized serving, but it's unlikely to inspire the kind of love that has made the Castles of Burgundy an enduring classic. My own feeling is pretty neutral--I like it just fine, I guess.
Tweet

Sagrilarus replied the topic: #285128 02 Nov 2018 09:02
I'm trying to figure out who it was that looked at Castles of Burgundy and thought to themselves, "you know, this needs a dice game version." Doesn't seem like much of a fit to me.

Next up -- Diplomacy, The Dice Game. Looking forward to your review.

I already dislike Castles of Burgundy, so I can't see myself enjoying this.

"The choice to not emphasize these suspenseful moments, to favor expediency and mechanical neatness over human drama, is at the heart of this game's design ethos."
Read More...