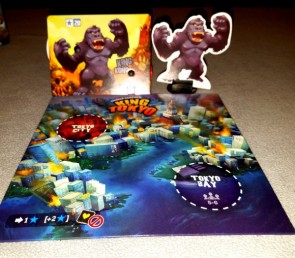 “Ladies and gentlemen, I'm here tonight to tell you a very strange story — a story so strange that no one will believe it — but, ladies and gentlemen, seeing is believing. And we — my partners and I — have brought back the living proof of our adventure, an adventure in which twelve of our party met horrible death. And now, ladies and gentlemen, before I tell you any more, I'm going to show you the greatest thing your eyes have ever beheld. He was a king and a god in the world he knew, but now he comes to civilization merely a captive — a show to gratify your curiosity. Ladies and gentlemen, look at Kong, the Eighth Wonder of the World.”

The Second in Iello’s standalone monster packs that are compatible with Both King of Tokyo and King of New York is none other than the granddaddy of all Kaiju, King Kong. Before we even start this review, let’s address the 8,000 pound gorilla in the room: Both King of Tokyo and King of New York already have super powered simians. KOT includes “The King” (now presumably downgraded to The Prince or maybe “The Artist formerly known as The King”) and KONY includes the Albino Ape known as “Kong.” As the names may have tipped you off to, King Kong may have been often imitated but never truly duplicated. If you weren’t already pretending these contenders were the real King Kong, you were doing something wrong. As such, the true Royalty making his way into both games is a dream come true.

The see through packaging gives you a good look at the King Kong standee that is included. The representation only reinforces Iello’s reputation for brilliant artwork. It’s a good mixture of ferocity and adorability. The scorecounter includes the same high quality artwork. It is worth noting that the scoring wheels, used to keep track of Health and Victory Points are looser than those from my original game and expansions. Nothing is more aggravating than losing track of either of these bits of information during gameplay. I was hoping it was an isolated occurrence, but the replacement part I secured suffered from the same issue. Personally, I used a couple of small paperclips slipped onto the wheels themselves and it has worked well to hold them more securely at their appropriate scoring positions.

Finally, you can’t have King Kong without the Empire State Building. Iello not only includes the signature skyscraper in the King Kong pack but also includes The Tokyo Tower for when visiting Japan. New Rules govern these additions but they are very simple, Rolling four “1” while in Tokyo will secure you a piece of Tokyo Tower. Collect all the pieces of the tower and you instantly win. Similarly, Rolling 4 “skulls” while in Manhattan lets you collect part of the Empire State building. It’s nothing revolutionary but it does add a third winning condition. But will you use it? It is fun snatching parts of the buildings from other players but after putting these buildings together, I found them more than a little unstable. Keeping Tokyo Tower together is like a mini-game of Jenga at two-for-one tequila Tuesdays. It’s not a matter of if it’s going to fall over, it’s when. The Empire State building fares better but, unless someone specifically plays at King Kong (since his power-ups synergize with it), we never end up using this portion of the expansion (Unlike the cultist in the Cthulhu expansion, which we use in every game, whether the Elder God shows or not).

The King Kong Monster Pack is a worthy addition to the KOT/KONY family. It is not a required add-on but more is always better when it comes to monsters you can bring to the table. If you have always wanted the one and true King Kong to lay waste to the metropolis of your choice, well, Hail to the King, Baby.

WadeMonnig replied the topic: #332488 22 Apr 2022 15:12
I have been digging playing King Kong in King of Tokyo lately. We still don't dig out the Tokyo Tower and Empire State Building but he's become my goto with the informal ban of me playingI Meka Dragon.
Read More...