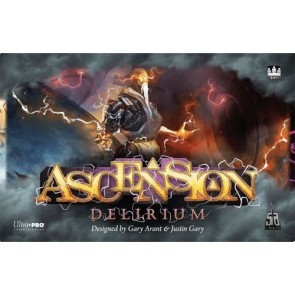 If there’s one thing that never ceases to amaze me in Ascension, it’s the innovation that keeps emerging after 13 sets. The latest standalone expansion, Delirium, does what Ascension does best: reinvigorates some old mechanics while adding a few new trappings. I was trepidatious about these new features, especially after the previous release being rather lackluster, but it turns out that the Stoneblade team knows better than me.

First, let’s get the craziest-sounding idea out of the way: the Delirium die. In a game known for its randomness, adding a custom d6 sounded like a good way to get a table flipped. I’m a devoted Ascension fan yet I sneered at this idea. Much to my chagrin, the die not only worked, but it’s fun. Each side of the die has a number 1-6, but with different effects. You can banish 1 card, draw 2 cards, get 3 Runes, get 4 Power, get 5 Glory, or get 6 Insight. Remember Insight? We’ll get back to that soon. Various cards, both monsters and heroes allow you to roll the die. Sometimes the dice gods have favor on you, other times you get the Draw-2 twice in a row when you’ve already drawn your whole deck. First world deck-thinning problems, am I right? You can also spend 5 Insight at any time to roll the die during your turn. This is incredibly handy and even results you weren’t hoping for can end up boosting your turn. It’s great. Bring on more dice.

Now, back to Insight. Dreamscape, released a few years ago, first introduced Insight. Adding another resource in a game is often tenuous (see: Dominion: Alchemy), but it worked well enough in Dreamscape. These bright orange eggs allowed you to purchase cards from your titular Dreamscape – a private reserve of powerful cards that were equal parts useful, ignorable, obtainable, and unreachable. There were some problems with generating enough Insight to get cards, but overall it made for a decent expansion. In Delirium, Insight is fantastic. It has been refined into an auxiliary resource that is smoothly integrated into the game, but one you don’t need to depend on. It’s helpful without being demanding. Outside of rolling the Delirium Die any time on your turn for a cost of 5 Insight, you can also spend it for Recur effects on cards. Liked that “draw 1” effect? Do it again. Insight flows in Delirium, thanks to hero abilities, monster rewards, and Dreamborn cards entering the center row. No longer just a side currency, Insight is just as much a part of the game as Runes and Power are. You even use it for auctions. Yes, auctions.

Perhaps the piece of Delirium I was most hesitant about were the auctions. I didn’t see Knizia as a co-designer on this set, so what were auctions doing in my Ascension? As it turns out, they’re actually making things pretty fun. We’ve seen the Fate mechanic in a few previous Ascension sets – a new card enters the center row and there is some kind of effect. Sometimes it would be gaining a Mystic or banishing a card. In Delirium, Fate triggers auctions. Going around the table, you bid Insight to take the effect of the card. While auctions interrupt play briefly, it’s hardly a nuisance. Everyone is immediately engaged in how much they want a card’s effect or how badly they want to block opponents from it. Surprisingly, this even works in a 2-player game. While it is a little wonky that auctions can trigger at the start of the game when players have unequal numbers of Insight, it’s nothing that will make or break the game.

Everything else in Delirium is standard Ascension. The deck of cards is one of the better ones in terms of variety and effects. There are cards that let you banish (yay!) and do other things you have and haven’t seen before. The Mechana Constructs all like working together and the Lifebound heroes give you points. There’s also the return of the Serenity effect from Valley of the Ancients, which triggers when there are no cards in your discard pile. Though I’m not the biggest fan of this effect, it’s nice to return to past mechanics in new ways.

Ascension excels when it reiterates. Delirium gives you something new and something old. Despite my almost rabid fandom for Ascension, there are certain sets that are thoroughly unmemorable to me. Delirium is not one of those.

fightcitymayor replied the topic: #285095 01 Nov 2018 15:07
I feel like, rabid fans aside, Ascension is getting to a place where it might be a more sensible iOS game, rather than collecting another block of cardboard to sleeve & put on the shelf. It feels like at this point, the original (and maybe the first expansion or two) may have a spot on a shelf, but the longer it goes, the longer it feels like it might be best digested in a more ephemeral form, instead of card-and-dice style. I feel the same way about Elder Sign. Like, the redundancy is uncomfortable and feels overdone.

fightcitymayor wrote: I feel like, rabid fans aside, Ascension is getting to a place where it might be a more sensible iOS game, rather than collecting another block of cardboard to sleeve & put on the shelf. It feels like at this point, the original (and maybe the first expansion or two) may have a spot on a shelf, but the longer it goes, the longer it feels like it might be best digested in a more ephemeral form, instead of card-and-dice style. I feel the same way about Elder Sign. Like, the redundancy is uncomfortable and feels overdone.

The amount of "stuff" is definitely a lot. I have everything in two boxes, most of which is unsleeved. Boards are stored elsewhere. I really would rather them stop with the big box releases altogether. The boards aren't necessary and I have piles of plastic gems that I don't know what to do with. Although I do play the digital version, I do still break out the physical one.
Read More...