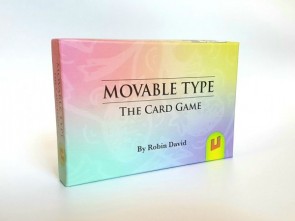 Are you sure that is spelled right? You could get another point if you added an “E.”

You know that feeling you get when you go first in Scrabble? When you have the board wide-open and the only limitation is the letters you have in your hand? Welcome to Movable Type, where every round captures that feeling. Mentioning another game in the opening paragraph of a review, even one as venerable as Scrabble, might seem lazy but it literally is that feeling…and Movable Type actually positively builds on the emotion.

Instead of randomly drawing tiles from a bag, you actually get to select cards using the pick one and pass drafting mechanism. While doing so, you do this little cerebral dance of points versus playability. Should you take the versatile and much needed “E” or pick the high scoring “J”? Is that “X” you initially passed on going to come back around, because now you have the perfect word to make with it? You won’t be solely relying on what is in your hand; three common cards are revealed that can be used by all players. This assures that there will be at least one vowel available since you pull one of the common cards from a specific deck with only vowels. This is such a simple but brilliant solution to coming up short on vowels.

The game consists of 5 rounds. After drafting your cards, everyone takes a few moments (or minutes) to compose their word and then everyone simultaneously reveals them. The simultaneous gameplay eliminates most of that pesky downtime waiting for other players to come up with a word. I say “most” because someone is always going to be the last person racking their brain. At my game nights, the game comes with an unofficial in-game timer, where you impatiently tap your cards on the table to indicate you’ve been ready for at least 10 seconds and what in the world is taking so long. The points for the words are then totaled up and the highest scoring words win the player’s cards from those that were played that round. The number of cards that you get to select depends on the player count and where you placed. The cards you win go into your “collection.” These are the cards you will use in the 5th and final round (the only round where scoring matters when it comes to actually winning). The rules state that you cannot look at these cards once you have placed them in your collection. However, we always play by the “relaxed” rule from the manual that allows you to check them any time you want. Whatever memory aspect that not looking at the collection adds to the game isn’t one I enjoy. I don’t need a reminder that my short term memory isn’t what it once was. Also feeding your “collection” are the Author Cards. They have specific goals you can try to achieve each round such as “Play a 5 letter word without using any common letters” or “Play a 13 point word.” Instead of giving you some obtuse Victory Point, these reward you with coveted word building enhancers like a Wildcard that can be used as any letter or the suffix “ER.”

This is the 2nd edition of Movable Type, so it has the benefit of addressing any issues that have popped up after being out in the wild. So, all of those once in thousand play ties and other twists and turns are addressed in the rules. This new edition also has expanded the player count to 6 and added a horde of new author cards (Is a group of authors called a horde?).

You can spell “maybe love” out of “Movable Type” and that has to be some sort of recommendation. If not, at least they are worth 15 and 11 points respectively. I am wholly impressed with so many aspects of this word building game. The all or nothing 5th round keeps all the players engaged for the entire game while suitably rewarding winning earlier rounds with extra cards. The gameplay is simple, it rewards the savvy, and is suitably sharp. Movable Type might not be a revolutionary word building game but it certainly is an apex evolution.

October 30, 2018 (Updated: November 04, 2018)
Rating
4.0
Movable Type
The gameplay is simple, it rewards the savvy, and is suitably sharp. Movable Type might not be a revolutionary word building game but it certainly is an apex evolution.
W
WadeMonnig Top 10 Reviewer 195 reviews

stoic wrote: Yes, but, can I play this game if I can't spell?

Up next: Auto Correct the expansion

Thank you for the kind words!
Read More...