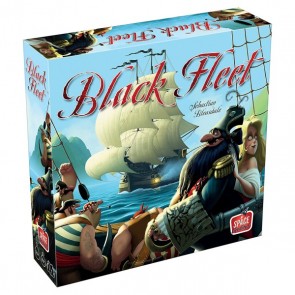 Welcome to the latest edition of Discount Dive, where I explore the discount bin in search of interesting and exciting games. The rules are kind of fast and loose when it comes to what I pick, but I try to keep it under $25.00. Don’t let previous Discount Dive articles mislead you; it is not like I just randomly pick out titles while at the store. Some games are on my radar and I happen to stumble across them on sale. That is the case with Black Fleet. When I came across it with a discounted price of $23.99, I didn’t hesitate to add it to my collection.

Black Fleet is a pick and up deliver game. Merchant ships pick up three cubes at one port to deliver to another for varying prices, depending on how far they must travel to get there. There are also, as one of our Therewillbe.games forum members colorfully put it, “Asshole Pirates.” They can gank, yoink, or swipe (pick the vernacular of your choice) this precious cargo to earn doubloons. In true pirate fashion, you can then bury the treasure for additional ducats. The twist is that you control both one merchant and one pirate ship of your color, so you get to work both sides of maritime law. Speaking of law, you also share control of two navy ships that have been dispatched to deal with the pirates.

Movement is handled using a card based system: each player starts with two cards that feature movement values for all three types of ships: Merchant, Pirate and Navy. On your turn you play a card, move all three types of ships and then draw a replacement. Combat is dead simple. Navy Ships stalk Pirates, pirates stalk merchant ships, and Merchant ships run like hell. Move adjacent to your prey and you immediately sink them (in the case of Navy versus Pirates) or Pillage them (in the case of Pirate versus Merchant). All the money you earn from your shipping and stealing exploits is used to purchase upgrades until you finally earn enough to ransom the governor’s daughter. This is just a bare skull and crossbones explanation of the game; you’ll also find things like fortune cards that provide rule breaking one-time advantages and the upgrades that are persistent abilities that you use the rest of the game.

Literally the only thing I do not like about Black Fleet is that strict player limitation. According to the box, you can only play it with three or four players. A quick trip over to BGG will score you an “unofficial” two player version with each player controlling two colors. I personally would really like to add that ever elusive fifth player. Come to think of it, there is another rule that I don’t like. The suggested game set-up is to shuffle up the player cards and pass them out randomly to determine what player gets what color. Nope, screw that, I’m Black. I don’t care if I go first (according to the rules, black is the 1st player), but I’m not going to spend the entire game moving the wrong ships because I can’t play as my preferred color.

I picked up Black Fleet years ago when it was on the cut, but I’m featuring it because I'm always looking for a reason to talk about Black Fleet. It has awesome metal coins, the coolest looking insert and is probably in my top 20 games if I ever bothered to make that list. In typical board game fashion, the price bottomed out for a bit and has now rebounded. You can still find it for under $30.00 and it is a great score even at that price.

It's all the pirate goodness you'd ever want in a game with a low overhead in terms of rules. The production is fantastic and it plays in 90 min or so. Maybe less.

Jackwraith replied the topic: #285751 09 Nov 2018 08:59
Yep. I love the greater story complexity of Merchants and Marauders, but the sheer elegance of a lot of what makes up Black Fleet makes me feel no concern whatsoever about having two pirate games that, in broad terms, do essentially the same thing. I really enjoy it.

Black Fleet is great. I also prefer it to M&M.

Josh Look replied the topic: #285760 09 Nov 2018 09:27
M&M is a mess, with bits that straight up don’t work (the AI ships), the illusion of choice (you could play against type of your captain, by why hinder yourselve to such a crippling extent?) and combat that is amongst the worst examples of convoluted game design in an era of gaming that was all about convoluted game design.

Black Fleet is kind of perfect at what it does. Love it.

repoman wrote: I've said it before and I say it again: Black Fleet is the most under rated game in years.

It's all the pirate goodness you'd ever want in a game with a low overhead in terms of rules. The production is fantastic and it plays in 90 min or so. Maybe less.

Colorcrayons replied the topic: #285803 09 Nov 2018 12:38
I don't have much to add, since I'm the guy who renamed this game into "Asshole Pirates". Its criminally underrated, yet at the same time, it's relative obscurity is somewhat deserved, in a weird way.

I think there is room for this game, even if you own both merchants and Marauder's and survive.

It may meet somewhere between those games, but is complimentary rather than competing with them for table time.

WadeMonnig replied the topic: #285817 09 Nov 2018 16:32
If I could change one thing in the game, and it might ruin the sheer sleekness off it, I'd make the power cards laid out on a tableau and you would get to pick one of each level to purchase along the way instead of them being dealt out. Just so you would have more personalized pirates/merchants. I guess there is nothing stopping me from trying it.

Colorcrayons wrote: I don't have much to add, since I'm the guy who renamed this game into "Asshole Pirates".

The guy who "Colorfully" renamed it. Get it? Colorcrayons, Colorfully? It's what passes for wit and a shoutout in my world

WadeMonnig wrote: If I could change one thing in the game, and it might ruin the sheer sleekness off it, I'd make the power cards laid out on a tableau and you would get to pick one of each level to purchase along the way instead of them being dealt out. Just so you would have more personalized pirates/merchants. I guess there is nothing stopping me from trying it.

This would add a FU layer as well if the tiers were first come first served; the leader gets their choice of all of them in each tier.
Read More...