My Little Scythe Board Game Review 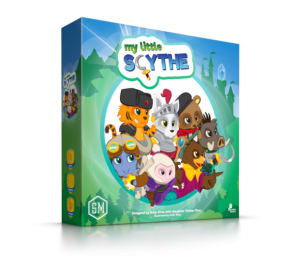 Once upon a time (that’s how all fairy tales start, right?), there was a father who loved his daughter very, very much. And one of the things they adored to do together was play board games. The father’s favorite game was called Scythe. And it was about Engines and building them and the struggle for power by pseudo political factions in Eastern Europa…the kind of stuff that little girls don’t find particularly interesting. They decided they would make a game something like his favorite game only using things that she enjoyed, Like little ponies, and pies and magical gems. And when they finished making the game, they shared it will all of their friends and they loved it! Everyone was very, very happy. Then, one day, all the information for the game they had made disappeared and everyone was very sad. But wait! It turned out the creator of Scythe loved the game they had created so much; he had decided to publish it so everyone could play it! And they all lived happily ever after. *ding* turn the page.

The opening paragraph sounds like a fairy tale but the story is completely true. And from this ridiculously adorable story comes a ridiculously adorable game, My Little Scythe. It takes the fundamentals of Scythe, adds in some sweet custom dice for resource generation and a heaping helping of Friendship that is worthy of a SpongeBob Meme.

For parents who have soldiered through their 54th game of Apples to Apples, My Little Scythe is a bloody godsend. But there is nothing that makes this exclusively a kid game. The Apples, Magic Gems, and Pies could easily be any other resource but are you going to play it with a table full of adults? Well, I just finished a game a five player game where the median age was older than the My Little Pony Franchise the original print and play version was based on. This decidedly casual gamer crowd overwhelming agreed “I like it….a lot. “ and a player with a few games under their belt declaring it was their new favorite game. Was I prepping them for a foray into Scythe proper? Maaayyybe. But even if we never take that step, it’s a thoroughly fulfilling experience from beginning to end. In short, it’s just as entertaining with adults as with children, just with decidedly more off-color cream pie jokes.

My Little Scythe actually surpasses its bigger brethren in a couple of areas. Where a proposal of six player Scythe is usually met with a resounding “Hell No!” My Little Scythe pulls it off with fewer issues, even when playing it with adults. (Adults are notorious for wanting to spend time thinking and planning and scheming, making for a longer game than when playing with the younger crowd). Also, no one is going to confuse this with a “dudes on a map” title like they did with the original game but they might be surprised to learn it’s a tricky little resource management game. One of those resources is called “Friendship” and it literally is about improving your relationship with other players by doing nice things, like placing Apples or Magic Gems on spaces containing their characters (Seekers). How often do you get to play a game where the “Take That” mechanism means “No, really, take the apples, I know you can use them.” It is a feel good move and, if you happen to be thinking that the Friendship level is also the tiebreaker at the end of the game and you are getting really close to getting the Friendship trophy, well, you can just keep that to yourself.

Normally, I find talk of production quality and inserts a bit pedestrian, but My Little Scythe is a sight to behold. From the subtle little winks and nods to veteran Stonemaier game fans on the board and in the cards to the bevy of instructions to address the little things that might easily go unnoticed. Need a color guide for painting the miniatures? It’s there. Having problems getting everything back in the box? How about an exploded view of how everything should fit. And the insert itself? It’s made by Gametrayz and, just when you think everything couldn’t possibly fit comfortably in the box, it slides in effortlessly. They must be using a bit of that fairy tale magic to make it fit it so perfectly. And they had to forethought to include slots for future expansions. As far as I am concerned, the quality of everything included should be the gold standard that other publishers should be shooting for. If I had to nitpick, the only thing that I would like is if the game included more Quest cards. In a five or six player game, you can end up going through the entire deck and end up gathering up the completed cards and shuffling them into a new draw pile. When even my nitpick is “I want more!” that is a good sign.

I am utterly charmed by My Little Scythe. It’s great to actually feel anticipation about a game when a kid requests that you play with them and it doesn’t matter if they are 7, 17 or 37, My Little Scythe delivers. And that is a true fairy tale ending.

November 14, 2018
Rating
4.0
My Little Scythe
I am utterly charmed by My Little Scythe. It’s great to actually feel anticipation about a game when a kid requests that you play with them and it doesn’t matter if they are 7, 17 or 37, My Little Scythe delivers. And that is a true fairy tale ending.
W
WadeMonnig Top 10 Reviewer 195 reviews

For example: Star Fleet Ship Captains had infamously bad production. The models were brittle and fragile, the hexes were made of an unspeakably cheap "paper like" material.

Conversely, Western Legends has great production value. The art is great and the mini's cool. This is info pertinent to the reader.

Liked the review though, it made me curious about Scythe in general and baby Scythe in particular.

WadeMonnig replied the topic: #287782 08 Dec 2018 23:54
I normally find it pedestrian because games typically fall into a middle ground. The exceptions are exactly what you mention, where extremely good or horribly bad products stand out.I just find mentioning it in every review like it is a box that needs ticked off is usually boring and unnecessary. Thanks for the feedback!

You are the second person to use that phrase in response to something I said recently.

repoman wrote: Out of curiosity is "thanks for the feedback" corporate speak for "go fuck yourself"?

You are the second person to use that phrase in response to something I said recently.

I personally don't speak corporate. I meant it as Thank you for taking the time to read and respond. In my experience "Let me write that down" is short for GFY because I'm pretty sure that is what they are actually writing down.
Read More...