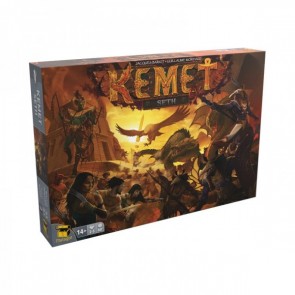 One of the criticisms leveled at Kemet is that once someone gets close to winning the game, others will band together in order to stop them. The Kemet: Seth expansion embraces that: that IS the goal. All of the players form an alliance in order to stop the player controlling Sutekh (or Seth: your translation may vary). What Madagot has created is a game that rejuvenates Kemet for veterans. Everything old is new again and everything new has a touchstone point in the original Kemet.

Seth himself comes in like a Slayer song personified. He is “Ghosts of War” mixed with “Seasons in the Abyss” (The video for SITA is particularly apt). The only victory points that count for him are Battle Victory points and total annihilation of the Alliance forces is an alternate winning condition. He has an entire new deck of combat cards that are exclusive to him. They can be particularly vicious, with Reinforcement adding two units to the battle before resolving the results or Battle Mirror that causes two damage to your opponent PLUS the damage of his own battle card. Or they can be especially cunning as with Seth Shield that blocks all damage for the entire battle and Domination, which lets you distribute 3 points between Strength/Shield/Damage after the cards have been revealed. Add in two entirely new sets of Divine Intervention cards (One exclusively for Seth, another for The Alliance)and you start to understand what I mean when I say everything old is new again.

Where Seth’s win condition is very straightforward, the Alliance has requirements that are both thematic and prevent the game devolving into an uninspired slugfest. First, they must build a Sacred Temple. This is a three level temple that is built by sacrificing units on an empty desert space. The higher the level you want to build, the greater the sacrifice (one unit for level one, two for level two, etc.). Once it is completed, it becomes a fully functioning temple like those found on the board, giving out prayer points during the night phase and it grants the Alliance a random battle perk. Then the Alliance must complete “The Great Ceremony” which involves Alliance members gathering forces at the obelisks and spending Prayer Points to open the Stargate…err…Portal to Seth’s city. Finally, the Alliance must have 6 permanent victory points or, alternately, begin the alliance turn occupying Seth’s city. The strategic balance of when and where to build and when to attempt the great ceremony without fatally weakening yourselves is a blissful conundrum.

Kemet:Seth is the Bob the Builder of expansions. “Can we do this? Yes, we can!” “Can the Alliance combine different player units to create one Troop?” Yes. “Does this combined troop have the powers of both players’ action tiles?” Yes. “Can Seth simply strike 2 player units dead as an action?” Yes. “Can Seth Corrupt an alliance troop, causing them to attack another alliance member?” Yes (He is the god of Chaos, after all). Granted, there are caveats to all these Yes answers and it’s not always painless. In order to get some of the pieces to click together properly with the original Kemet, things get a bit fussy. Take “Furious Assault”: This Seth exclusive action allows him to move two armies as a single action. Sounds easy enough except it creates a number of smaller questions. Are these movements simultaneous or do they take place one after the other? Can Seth attack the same army twice? If I play a movement divine intervention card, does it affect both armies? If these movements create two separate battles, do I still play one combat card and discard a second for each battle? As you can see, a simple one rule addition suddenly becomes a one paragraph explanation. And while game does a good job of covering 95% of those questions in an orderly and complete manner, it’s a big change from the sleekness of regular Kemet. As for those remaining 5% that are unclear, there is a FAQ already available and the developers have been more than helpful in quickly answering any questions that have been posed.

One of the typical comments about expansions is “You can add this to the Base Game and teach it all at once!” Can you do this with Kemet: Seth? No. Non. Nyet. Nein. This expansion necessitates more than just a passing familiarity with the base game. If Kemet was the sleek, smooth DeLorean, this is the Flux Capacitor that is bolted to it. It's not super slick, it has some hiccups but damn, what a ride. Forget that quick and tidy 90 minute game of Kemet: this is three hours of chaos. Expect some rule checking and learning the ropes of all the new powers your first few plays. You certainly don't want to be learning the basics while trying to grasp the complexities of this expansion.

The gameplay itself has the feeling of trying to solve an ever shifting puzzle while the other players keep taking the pieces you need. There have been a number of times where I’ve thought “Oh, this is it right here. This is how you break the game.” Such as, as the alliance, I thought “You can flood the board with newly constructed temples. There is no way Seth can contain three, four or five players holding temples with the armies he has available, we’ve got this in the long game” The tactic seemed solid…except, Seth just came out, preyed on the weakened armies who have sacrificed troops to build those temples and the long game was over before we could say “Eight battle Victory Points”. The dynamic of the game changes with the number of players engaged. A tactic that might have worked versus two alliance players won’t have the same effect on an alliance of four. This is fantastic for owners of the game, not so much for reviewers trying to assess any critical flaws at different player counts.

You have those wonderful conversations with others (and yourself) post game. “Seth should have taken Hand of God. Seth only has one Pyramid to level up but it would have kept it out of the hands of the alliance and, with the addition of the eclipse creating extra night activation half way through the day phase, it makes those night activation tiles like this much more desirable. “I literally have texts from myself that read “Unit Corruption first round to create an effective 3rd Troop. Combine this with Mercenaries from the Ta-Seti expansion.” That is how engaging this expansion is, when random epiphanies during the day warrant texting yourself. As the Alliance, you also have those conversations mid-game, while you plan your tactics. As with games like Fury of Dracula, the Alliance can discuss any tactics and plans but they have to do it in from of the Seth player. He is an omniscient god after all and is privy to the planning of mere mortals (well, you can’t discuss what Divine Intervention cards you hold because the will of the god’s are unknowable.). Granted, sometimes Seth steps outside for a smoke break and you might manage a few minutes of covert planning.

How this release interacts with the other Kemet Expansions may be a concern. With Kemet: Ta-Seti you can use the Black Power tiles and the Black Pyramids. I would even go so far as to say you SHOULD use them. If you have played with them before, you know that the extra level of decisions and strategy is excellent. It translates exactly the same when using it with Seth. The Path of Ta Seti module is not supported with Seth and, honestly, I always thought it was more of a distraction than an improvement, so I can’t say I am disappointed in this decision. The developers have stated that the Cyclades/Kemet crossover expansion, C3K has “Not been playtested” with Seth. A quick look at the creature tiles makes me think that it would severely damage playability. Specifically, the Cerberus Power Tile allows you to prevent troops from entering a specific space. With the addition of the Portal used to access Seth’s city and Seth always going first in the day phase, it could be used to create an impregnatable blockade which, at best, wouldn’t be in the spirit of the game.

Kemet: Seth is a wish-list come true for a one versus many version of Kemet. I enjoyed being the Big Bad. I equally enjoyed being part of the alliance and working to stop the super powered Seth. It's not without its bumps and bruises but it reinvigorates Kemet in an altogether impressive way.

November 21, 2018 (Updated: November 22, 2018)
Rating
5.0
Kemet: Seth Expansion
Well, the south side of Cairo is the baddest part of town. And if you go down there, you better just beware of a god named Sutekh.
W
WadeMonnig Top 10 Reviewer 195 reviews

Real reviews for expansions by experienced players are so rare, so this is much appreciated.

Real reviews for expansions by experienced players are so rare, so this is much appreciated.

Thanks Gary! A full priced expansion for a game like Kemet this far out from it's initial release is definitely for the experienced player IMHO. Someone was complaining online it's not the six player expansion He wanted. Adding a simple sixth individual player would be something I'd be lucky to get out more than a couple times a year, this I can play any time I have 3 or more and want a mammoth rethink of everything I know about the game. I love it.