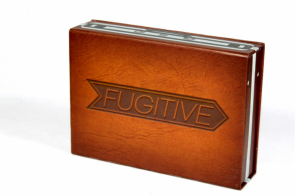 Game Name
Fugitive
Designer
Tim Fowers
There Will Be Games

Fugitive is a master class in simplicity, a design so pared-down that its beating heart is laid bare on the table from turn one.

I’m not a board game ascetic--I’ve got no problem with chromed bits and bobbles, I like tables and sub-tables, and I don’t even mind the odd bit of flavor text. But occasionally, a game will come along that reminds you not of the virtues of simplicity (which sound suspiciously akin to required reading and a high-fiber diet) but of its pure, unadulterated pleasures. Fugitive takes the hidden-movement genre and disassembles it with a careful eye, keeping only the parts that directly contribute to the thrill of the chase.

Fugitive is an asymmetrical two-player card game by Tim Fowers. One player takes on the role of the titular fugitive looking to get the hell out of Dodge, while their opponent plays the marshal trying to track down the outlaw before he skips town. Gameplay centers around a set of location cards numbered between zero and forty-two. The fugitive starts with a small hand of low-numbered cards as well as the forty-two card. This final card is his golden opportunity, his ticket out--if he manages to play it, he wins the game.

The trick is getting there. The zero location card starts in play, and it’s the fugitive’s job to bridge the gap between it and the escape card. Each turn, he draws a card from one of three location decks (separated into low, medium, and high cards) and has the opportunity to play one location card from his hand face-down as a hideout. The general rule of placing a hideout is that it must be between one and three numbers higher than the previously placed hideout, meaning that if the last card played was a five, the next hideout needs to be a six, seven, or eight. Simple, right?

There are a few twists to this very basic rule that open up a delightfully tricky space for play. You see, some cards have not only a number, but one or two footprint icons as well. By playing these sprint cards facedown with a hideout, the fugitive can extend his “range,” adding the combined footprint values to the three he can naturally move--if you’re willing to get rid of a few cards, you can make massive leaps toward your escape. Is it worth emptying out your hand (and reducing future options) to lead your pursuer astray? Or, do you make a bold move and play a bunch of sprint cards, making your opponent think you’re jumping ahead while you actually play a card just one above your previous hideout? Be careful--there are no easy decisions in this game.

Because, while the fugitive gets a small head start, the marshal will soon be nipping at his heels. Her goal is to uncover every one of the fugitive’s hideouts before he has the chance to escape. Her turns also involve drawing a card, eliminating possibilities for the fugitive and tightening the noose. Afterward, she has her own hard decision to make--guess a single number or press her luck and guess any combination of numbers she wants. If she guesses a single number and that card has been played facedown as a hideout, the card is flipped (along with any sprint cards accompanying it). If she guesses multiple numbers, the same thing happens--but only if every number she has guessed is a hideout card. Get even one wrong, and nothing gets flipped. It’s a deliciously hard choice with big risks and big rewards. How much do you trust your gut? How well do you really know your opponent?

If it seems like I’m spending a lot of time talking about the rules, it’s because the experience of the game relies so entirely on this small (but strong) mechanical framework. Unlike some of its big box hidden-movement compatriots, there’s no fluff or additional systems to jack up complexity (or play time). With Fugitive, what you see is what you get. But within this lean machine is the potential for riveting human drama, with plenty of opportunity for big moves and clever gambits by both players. This is why I prefer Fugitive to a bigger game like Fury of Dracula--it manufactures the same exciting moments of deception and revelation in about twenty minutes instead of two hours. And while others might enjoy the table talk of multiplayer manhunts like Scotland Yard, the one on one, cat and mouse quality of Fugitive is pure and thrilling in a way that makes these other deduction-by-committee games feel ponderous.

Fugitive does offer the opportunity to spice things up via the optional addition of event cards. These cards are added to the location decks and, when drawn, will throw a wrinkle into the gameplay, giving a mechanical edge to either the fugitive or marshal. These are fine, I suppose, but to me they muck up the otherwise perfectly simple puzzle Fugitive presents. While I imagine they might be entertaining to folks who’ve played the base game to death and need a little variety, I’ll happily keep them tucked into the back of the box for now.

And what a box it is! For a small experience, a lot of care has been lavished on the game’s presentation. The box is fashioned to look like a briefcase, with a magnetic clasp holding everything together. The interior is just as charming, with plenty of Fowers Games’ signature 60s-inspired retro-cool artwork to be found. Maybe the most tactilely fun thing in the box is the marshal’s laminated notepad, which comes with a dry-erase marker and makes taking notes a pleasure.

While I think gamers are sometimes too easily wowed by a nice bit of plastic or cardboard, in this case the high-quality components feel directly related to the attention to detail exhibited in the game’s design--Fowers understands that small choices can have big consequences. By building a simple machine with great care and thoughtfulness, Fugitive shows that a small game can cut through the noise and deliver some of my favorite gaming experiences in recent memory.

AndrewMcAlpine replied the topic: #288146 14 Dec 2018 11:41
Yes and no. I didn't go into it in the review, but each player's first turn is slightly different then the turns that follow--this allows the Fugitive to build up an extra hideout before the Marshal starts guessing. That said, the game could still totally end on the first turn, but it's pretty unlikely. If such a thing did happen, I think it would be more funny and memorable rather than deflating.
Read More...