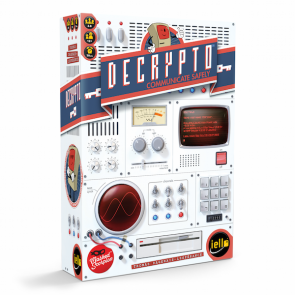 Does Decrypto crack the code on party games or is something lost in transmission?

When you slide Decrypto onto the table someone always asks “What kind of game is that?” And the answer always seems to be “Well, it is kind of like Codenames...” Which, while well intentioned, gives the wrong vibe and does a disservice to the game. I am going to walk you through part of a faux round in a (hopefully) entertaining way to try to explain what makes Decrypto tick. Note: In this review I am going to use “******” instead of the actual key word used in the game, this will allow you to get the feel what it is like trying to intercept the other teams clues. So, try reading the review before scrolling to the bottom to read the portion marked “The Reveal” to see how you would have fared.

Players separate into two teams, each team sitting on one side of the table. They then take four cards and place them into their screen in the slots labeled 1,2,3,4. These will be the cards you use the ENTIRE game. Everyone on your team can see them and reference them throughout. For this example, let’s say 1 is ******, 2 is Pepper, 3 is Egg, and 4 is Mouse. One player on your team then draws an encryption card that gives them a sequence of three numbers. Let’s say they are: 1,2, and 4. They aren’t allowed to share this information but must relay it to the other teammates via clues. The player who drew the encryption card then writes on the included paper the clues they will read aloud for both teams to hear. Let’s say: Laundry, Spice, and Fur.

Meanwhile, on the other side of the table, the opposite team is doing the exact same thing. Then it is time for the reveal: you read your clues aloud to your teammates and they must decipher which clue goes with which word. And they figure out that Laundry=******, Spice=Pepper, and Fur=Mouse and say 1,2,4. Correct! And your reward for successfully deciphering the coded message is…nothing. Welcome to corporate America where a job well done gathers no praise or reward. But, on the other side of the table, the opposing team has written “Laundry, Spice,Fur” under the 1,2,4 slots on the opposite side of their paper. Now they are on their way to trying to crack your code. Then you flip your paper over as the other team reveals their words and you write down ““Head, Brain, Bake”” under whatever positions they are revealed to be associated with. That’s right, you are both an encryptor and a decryptor, all for the same pay. Corporate America strikes again. And then round two begins and it all starts over…except now you have those little clues to decipher in an effort to figure out what the opposing teams words could possibly be. And that’s when things start to get REALLY interesting.

During the (possible) 8 rounds of the game, different combinations of numbers always come up but you will be giving clues on three of the four words every round. Let's just concentrate on Slot 1, ******, for this example. Imagine the clues given to your team have been: Laundry, Blonde, and Toilet Bowl. You sit smugly thinking that the other team is suitably confused about what the key word could possibly be. Then, when it comes up the next round you ponder what your next clue should be. How about “Nirvana”? Everyone knows that was an album name by them, right? * looks around the table * Maybe not. Maybe “Anime” because everyone is familiar with that one, correct? Nope. You settle on “Whites.” And this is where the scoring comes into play. There are two ways to score points and one of those is when your team fails to decipher your clues. You see, you forgot that “Egg” was one of the other key words. And now the team are rapidly discussing which clue “Whites”could pertain to. They choose...poorly. And now your team has one black, negative Miscommunication token and are half way to losing the game because if your team accumulates two black tokens, they lose.

As I alluded to above, you team CAN discuss among themselves what choices to make BUT (big but) the other team is stitting.right.there. So, you have to talk very obscurely, in order not to tip them off to what you are discussing. It's a fantastic portion of the game and an opportunity for deception or disaster. It is cold war paranoia at it's finest.
The other way to score points, those of the positive quality, happens when a team “breaks” the code of the other team. From the 2nd round on, before your team guesses the word order, the opposing team guesses first. They don't need to identify the actual words, they just need to know which key word you were referencing in your clues. If they get it right, they take a white positive Interception token and are half way to winning because you need two white tokens to win. This keeps your hints always walking a line between obvious and oblivious. While you can't get too cute for your own (teams) good with the clues, you MUST keep them vague.

Imagine this scenario: You are watching your teammate who is acting as the encryptor for your team and you can see he is struggling. You are pretty sure he is trying to come up with a clue for ******. But what will they say? “Don't Drink This?” “Kardashin bungholes”? It’s going to be Kardasin bungholes isn’t it? …and then they say “Clorox” and you think “Ffffuuudddddgggge” Only you’re not thinking fudge, you are thinking the other team HAS to know what key word #1 it is now when they combine it with Blonde, Laundry and Toilet Bowl. Clorox would be a perfectly acceptable clue in Taboo, it would be a weak but effective clue (Clorox-1) in Codenames but it could be a virtual death knell for your team in Decrypto. Now, imagine if it wasn't the 5th clue given but, instead, was the first clue revealed. You can see how an inexperienced player who is accoustomed to Codenames or Taboo could virtually tank the game for their team in the first round.

Let's be honest: The first time playing a new game is extremely important. If it bombs, it may never make it back to the table. Decrypto can both bomb and, possibly more importantly, make a person feel stupid for giving a clue they thought was perfect. So, It’s a party game but it is more of a game night party game, if that makes any sense. You want to be able to give an explanation similar to the example I gave at the beginning of this review and that sometimes isn't possible in a party setting. Come up short of your explanation and you'll probably be treated to a rousing round of every losing player's favorite game “But you didn't tell me that!”

The game does come with a sand timer and I remember thinking “We don't need a sand timer” and you really don't....until you do. The suggested way to use it is to keep the game from dragging: As soon as either Encryptor has finished writing their clues, they turn over the Sand Timer. The opposing Encryptor must finish writing their clues before the Sand Timer runs out. This basically gives the other team 30 seconds to complete their clues, which is fair enough.

Decrypto does have a few rules governing what sort of clues you can give and one jumped out at me, which is “Clue must be based on information that is publicly available.” It jumped out at me because this has been the way I've “gamed” things like Taboo for years. When your clue can be things like “This was Jenni Fesler's nickname in high school.” you can exclude most of the other players from having any idea what the hell you are talking about. So, smart move on Decrypto's part, one less weapon in the mutually assured destructioni arsenal for my part.The phrase “I love a good tie” is normally not a part of my board gaming vocabulary. But I do like that one of the tie breaker items in this release is “Each team tries to guess their opposing team’s four Keywords.” Thematic and perfectly in line with the rest of the game. I love it.

Looking like a relic from the Cold War, Decrypto does a admirable job of providing a great party game, as long as you give it the proper introduction. I vastly prefer it to other “code” games I have played. It will occasionally make you feel brilliant, sometimes make you feel stupid, and could make you think way too hard about what is a good clue to give for a keyword like The Reveal: Bleach.

Vysetron replied the topic: #288526 20 Dec 2018 10:12
Good review! I'll definitely take it over Codenames, but I find Codenames more slow and stressful than fun so that's not a huge statement on its own. Glad this has some pace to it.


Vysetron wrote: Good review! I'll definitely take it over Codenames, but I find Codenames more slow and stressful than fun so that's not a huge statement on its own. Glad this has some pace to it.

For the record, I'm not a fan of Codenames, I own a copy but we rarely, if ever, pull it out. This is much quicker paced in my experience since you aren't looking for one word to apply to multiple clues. Not that you can't spend way too much time coming up with what you consider a "perfect" clue for one word. If someone is prone to AP, you pretty much have to pull out the sandtimer. It's too bad that it is usually instantly compared to Codenames, because the differences are key to the enjoyment in my experience.

I liked the play-along style, that was a good twist in a review.