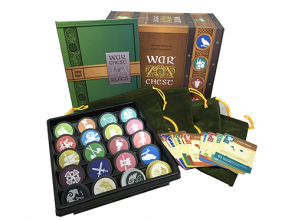 Last year I played a ridiculous number of new games as potential inclusions for The Board Game Book. The editor wanted a certain quality bar for inclusion which, in this site's terms, is "3.5 stars. Ok so we don't actually allow half stars but you get the idea. Essentially: not all the games that failed to make the cut were bad.

Some of them were bad. Either way, you deserve to know about them. So here they are.

This is a curious asymmetric abstract wargame. Each side gets a different selection of units from a smorgasbord of militaria. Units are lovely, chunky poker chips and two each of your selection goes into a bag from which you draw. When you pull a chip you can either deploy it, use it order a matching chip on the board, or add a new one to the bag. You win by controlling a majority of objectives on the plain board.

Although the units have names like archers or cavalry and relevant powers like ranged combat and extra moves, it's pretty abstract. At the same time, though, it's challenging and fun to play. There's a certain chess-like feel, enlivened by all those special powers. And on top of that, you're always in a tight spot with the contents of your bag. The more troops you put on the ground, the more unwieldy they become to command. Which just gets worse as units die, since they're not replaced. Getting the balance right is tricky and there's the constant threat of running out of unit chips.

And this is where the game lost its spot in the book. Because it's not too uncommon to end up in a situation where you've got a single chip which becomes a unit you can't command. Or, worse, two chips and almost nothing else in the bag and your army turns into a relentless, reliable killing machine. War Chest has some neat concepts, but it doesn't reliably deliver interesting games: 3/5.

Michael Barnes warned me about this, but I was too in love with the box art to notice. I mean: mazes, monsters, and mayhem all in gloriously gaudy 70's art. What's not to love?

Well, the game inside as it turns out.

It's billed as a co-op but is really a solitaire game, a choose your own adventure book translated to a deck of cards. While that seems pointless, to give the game its due, the move is a springboard to enliven the genre. There are two decks for each "chapter", one of the actual text paragraphs and another to serve as items, side-quests, visual puzzles, and all sorts. The duality works well, adding a layer of escape-room game atop the numbered paragraph picking.

Adventure books, though, live and die on the quality of their writing. And House of Danger is one of the worst written it's been my misfortune to encounter. A laughable piece of sci-fi, "psychic" pulp that isn't in the "so bad it's good" category but merely bad. There's not even any combat to enliven things: 1/5.

Clearly an attempt to put Tetris in a box, Drop It is a dexterity game where you push wooden shapes into a narrow chute. If it comes to rest without touching another piece of the same shape or colour, you score it. The higher you go, the more points it's worth, plus there are bonus spots if you can hit them.

There are two important things about Drop It which you won't find in that description. The first is that it's got a very unfortunate paragraph in the simple rules which is open to interpretation. The second is that the shapes are heavy and knock each other around as they fall. Because of this, there's a lot less skill involved than you might imagine.

Nevertheless, I quite enjoyed Drop It once we'd got that rule clear. Dexterity games tend to be quite unforgiving. So I found the randomness a refreshing change, making the game unpredictable and exciting. So why didn't it get into the book? Because literally no-one else I played it with, including the editor, liked it. Take my enjoyment at your peril: no point owning a game no-one else will play with you: 3/5.

Sometimes, what attracts you to a game in the first place turns out to be its worst feature. Such is the case with Gearworks. Everyone has a hand of numbered and coloured cards to place into a grid. Rows must be in number order and you can't repeat colours on columns. If you can make a successful play, though, you "own" that row and column … until someone else makes a play that "owns" one or both.

At the end of the round, you get tokens for everything you own which translate into victory points. And of course, there are special powers and resources to spend, which break those rigid placement rules to keep things interesting. Trailing players get lots of these resource for free which isn't so much a catch-up mechanic as an express train.

I figured it would be a nasty game of one-upmanship. And so it is, but so much so that the last couple of plays each round become the entire game. Most of what's gone before is pointless, making for a frustrating, dull experience. Fans will tell you that early plays help shape later strategy. And so they do but: absolutely nowhere near enough to save the game: 2/5

No-one's ever heard of this bizarre little card game from an obscure publisher without even a designer's name on the box. I played it at a game fair, my demo opponent playing cards and claiming victory with the fascinating smoothness of a magician.

Apparently inspired by digital RPG inventory management, you win by collecting a matching set of four equipment cards. The catch is that you can only have one of each type at any one time. On your turn, you either place a card into the center of the table or take a new one. At first, these come from face-down stacks. But with time you can take them from the center. If you do you don't take one, but three, and put two back.

The trick is arranging that table center so that you get access to the cards you need and your opponent doesn't. In spite of the lovely art, it's totally abstract and tough to play well. The trouble is that after a few games it feels oddly hollow. It's not deep enough to burn brains and too dry to make you want to engage with its puzzle: 2/5.
Tweet

Josh Look replied the topic: #289393 07 Jan 2019 21:09
Going to have to disagree on War Chest and how only having one chip left is some sort of design flaw. It isn't. Use that chip to hold a control point and get over it. I've never seen the second situation you mentioned in my 20 or so plays.

I haven't played House of Danger but have read a few reviews. And I was struck that nobody compared it to the Fighting Fantasy books, by the Games Workshop guys. They were hugely popular when I was growing up. You had skill points and so on and I seem to remember you could collect items too that you could use as you progressed.

Were these published in the states?

It just seems weird that people were talking about this appealing kind of twist on the CYOA books which make them a bit more interesting (if poorly written), but, these other books have been out there for 30 years already.

Josh Look wrote: Going to have to disagree on War Chest and how only having one chip left is some sort of design flaw. It isn't. Use that chip to hold a control point and get over it. I've never seen the second situation you mentioned in my 20 or so plays.

I haven't played as much War Chest but we're keeping it for now. The attrition has been just short of grindy so far, and holding the key point like Josh mentioned has made for pretty cool endings. Also I've pulled off the 2-disc murder machine and it was pretty rad, but certainly not gamebreaking.

War Chest is going to be forgotten long-term. Shame. In a different year I think it would have been a knockout.

House of Danger...we haven't touched it in months. Didn't even finish it. Probably won't. I still think Prospero Hall makes the best mass market games you can buy right now but HoD is certainly not a good example.

mc wrote: I haven't played House of Danger but have read a few reviews. And I was struck that nobody compared it to the Fighting Fantasy books, by the Games Workshop guys. They were hugely popular when I was growing up. You had skill points and so on and I seem to remember you could collect items too that you could use as you progressed.

Were these published in the states?

They were. I still have about 15 of them, including a couple that I was never able to beat...
Read More...