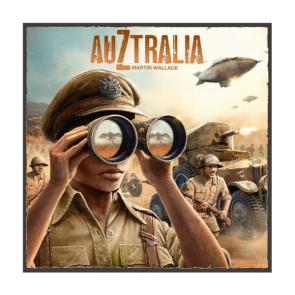 Cthulhu Down Under: Where Old Ones grow and men shudder.

A study in emerald, the short story by Neil Gaiman, instantly impacted me when I read it (You can find a PDF of it here: Study in Emerald). While I was always a fan of Mr. Gaiman's work, the blending of the H.P. Lovecraft mythos with Arthur Conan Doyle's Sherlock Holmes immediately seemed like something that should always have been melded together. So, when the board game version of “A study in emerald” was released, I was immediately drawn to it. The first edition of the game was a beautiful mess of sharp edges and complexity. While the second edition cleaned up the gameplay, it also felt like it swept out much of the what drew me to it initially: the Study in Emerald interweaving.

This year, Martin Wallace returned to the study in emerald universe with Auztralia. The outback lays before the players, ripe for exploring and filled with resources required to recover from centuries under the rule of the Old Ones. But something lays sleeping, perhaps dreaming, in this new frontier. The Z in Auztralia does indeed stand for Zombies but like the original source material of the H.P. Lovecraft universe, they aren't a major driving force. It just has a better ring to it than “Cthulhu Down Under: Where Old Ones grow and men shudder.”

Time is your most important resource. Every action the players take requires a specific amount of time that moves them up the”Time Track” and, at a particular point on the time track, the Old Ones awaken and become an active player (this is automated by a Old Ones deck). As is always the case, there is never enough time to properly prepare and that feeling of impending doom tolls like a bell on the sanity of the players, which is pitch perfect to the theme of the game. For anyone not used to playing a Time Track based game, it can be jarring when they take an action, such as building a railway across rugged terrain that takes 3 Time Points, only to find the other players will taking two or three actions before it is their time to act again.

As I mentioned, the original “a study in emerald” had some edges and complexity in the ruleset that hindered my enjoyment of the title. So, let's drop some rules from Auztralia into the Fiddly-O-Matic 9000 and get the results:
F – If you take damage in combat, you can put it on any unit...except an airship
I – All damage done to old ones carries over from combat to combat...except that done to Zombies
D – You can only take each action one time by placing a cube on it's position. Unless you wish to take it a future round, then pay the cost plus one gold for each cube that has been placed there.
D – Place the starting player tokens on the time track with the indicated number of players...unless you are playing a fully co-op game then place them 4 time spaces closer to the old ones disc.
L – When moving the Old Ones, use the direction indicated on the card if there are equidistant targets and follow the clock-wise or counter clock-wise indicator.
Y – Take out the Old One tiles marked X or XX for a easy game. Take out the red binder clip survey cards if you are playing an insane game.
Bonus: Three Circular tokens are included of each player color. One is used to indicate that player's position on the time track, the other two identical tokens are used to indicate damage to old ones in the value of 5.
The Results are in and being printed out (Reads aloud): M-a-r-t-i-n W-a-l-l-a-c-e Hmmm, go figure.

The big question is does that ruleset and its execution negatively impact the gameplay experience? The short answer is No. The rules, while not always smooth or ultra intuitive, run the engine behind the game efficiently. And the rules also have a tactileness to them in that if you misplay a rule once, you will likely never misplay it again, as they really stick in your mind. So, brass tacks: How many rules did I screw up in the initial play? Three. I always joke there is “That one rule that everyone gets wrong” in every game, so it's not a “horrible” ratio. We played a fully co-op game and I did not move the players the full four time spaces closer to the Old Ones play (major advantage for us), I removed the red binder clip survey tiles from the game thinking that was recommended for the first play (an advantage for the Old Ones, as it gives more chances of enemies appearing) and we considered a full loss of sanity a withdraw instead of a defeat (a major advantage for us but it only came into play once near end game, this rule is covered in the player aid under Combat Reminders, I just blew it).

And the second game, we found out that we were scoring the victory points for enemies defeated by multiple players wrong (we gave all the VP to the player who struck the final blow, when we should have split them using the included tokens and not used the actual tile). So, now the total is up to four rules played wrong in the first game and one in the second. Third time is a charm, right? And we managed to not foul up any rules on the third play. I will say I didn't just jump into our initial play. I watched a couple of how-to-play videos and read the rule book cover to cover. All of these rules are found in the rulebook, I just didn't absorb them thoroughly. My biggest complaint is that because we messed up the rules we had to “throw out” the one win and one defeat from the first two games. Like achievements in video games, that means absolutely nothing but it still nags at me.

I've never been a fan of most co-op games but Auztralia side-steps the pitfalls that normally turn me off. You never feel like the game was predetermined before you start. The game set-up is fairly extensive but gives the adventure a tiered difficulty, so you never stumble into what could be an unbeatable situation without fair warning. There is a full co-op mode and an independent co-op mode with the latter avoiding any alpha player situations. In this mode, you are all working to defeat the Old Ones but with human ego playing its part. Both modes are well executed and the difficulty adjusts with a few simple rules and the beginning placement on the Time Track. Rushing to attempt to rescue a faltering player gives a smug satisfaction and watching the virtual cavalry arrive in the nick of time is even a wave of relief for the player in peril. When someone does fall, you still total up Victory Points and attempt to overcome the Old Ones score, so you never feel like “Well, that was two hours wasted...” (Granted, your chances of outscoring the Old Ones after a player falls is virtually nil).

The estimated game time on a box usually falls somewhere on the “Estimated wait time when put on hold” spectrum. Australia states that a game should last 30 to 120 minutes. Our first game, with a full four (new) players, clocked in at 3 hours. Our second with three now-experienced players ended in failure around the hour mark. The general consensus was that if we could get a successful defeat of the Old Ones in around that two hour mark, that would be perfect. Anything longer than that feels like the game is dragging on. This is definitely achievable, even in a four player game, if you leave out the set-up time.

There are a multitude of these tough choices in every aspect of this game and love the push/pull of all the decisions you make. Farms are an instant asset that immediately becomes a liability. You build one for the gold then hope the Old Ones don't blight them (earning them Victory Points). However, you also want to use them to slow down/distract the old ones so they don't attack your ports. Infantry work especially well as fodder in battles but they limit the range of your attacks and use up more precious time when you move them in combination with more powerful units.

Combat involves drawing cards. A combat round is one card so you can expect each engagement to involve drawing and resolving at least 8 to 10 cards. It is not the instant resolution of dice and you will literally have some rounds where nothing happens between you or the old ones. While these melees are perfectly engaging for the player involved, it is easy to lose the attention of players not directly involved.

The variable set-up means no two games are ever exactly alike and the double sided game board provides a completely different experience when you move from the Eastern to Western side, with the lack of certain resources moving to the forefront of your concerns. Auztralia is easily one of the best gaming experiences I've had this year, which is high praise since I don't normally care for co-ops. I look forward to repeatedly returning to the down under, where “that is not dead can enteral lie” unless us pesky humans poke it with a sharp stick.

WadeMonnig replied the topic: #292104 11 Feb 2019 17:56
It's great fun. Just played it again last weekend. I do prefer the fully co op rules, mainly because it's easy to lose if you don't have full access to all railways once you connect them.