The Pretender Board Game Review 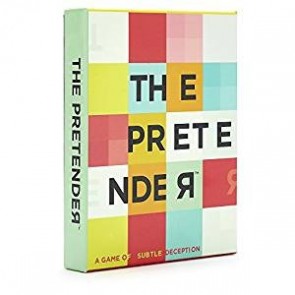 Game Name
The Pretender
Publisher
Gamely Games
There Will Be Games

Fake it until you can make it (or can make out the clue).

*clue cards are dealt out to all players*

The category is “Films"

Every keyword on your card reads The Pretender. You try not to react.

*The player two seats to your right speaks up*

Inwardly, you silently curse. You only have two charades to try to deduce what the film could possibly be before you have to give your clue. Outwardly, you pretend to read what film it is and nod to everyone at the table.

*The player who initially said the category number does a silent mime, twirling his index finger for half a second. Everyone smiles or nods, so you do the same...still clueless to what the keyword is*

*The player to your immediate right does a quick charade of what might have been hands on a steering wheel...or maybe he was doing the Dougie*

Now it falls to you...you must convince everyone at the table that you know exactly what the keyword is and relay that with a short charade. Should you fake it completely, do something vague enough they may mistake it for something else, or simply do a twist on one of the previous charades and act innocent? Suddenly, a movie title pops into your mind “Driving Miss Daisy!” That has to be what it is! You mime a flower blooming and stare confidently around the table. You are met with frowns and disapproving looks. Now you know you blew it. You know that, when the accusation round comes, most of the fingers will be pointed at you. Your only chance is to concentrate on the remaining player's charades, hoping you can deduce what the film actually is... it's obviously not Driving Miss Daisy, that was just silly.

Taking a classic game (Charades), condensing it down and adding a betrayal (or, in this case, Pretender) aspect is a solid recipe to creating a “new” game. The mechanisms have proven themselves for decades, so it comes down to how well it is implemented. In true reviewer fashion, I'm going to point out some of The Pretender's shortcomings, even though I have no idea how they can overcome them. The opening paragraph encompasses how the entire game will play out, only taking place over a number of rounds determined by the players.

Firstly, it has a tight player restriction of 4 to 6 players. At first glance, it would seem that all you would need to do to expand the player count, to say 8 players, would be to add two more player cards to every category. However, once you have played the game, you realize adding two more players (and thus, two more clues for the pretender to decipher) would likely throw off the balance of the game by adding too much information. The Pretender screams Party Game but that sound is muffled by only allowing up to six players. Also, due to the nature of the game, when you have less than the full compliment of 6 players, you must go though each set of category cards and remove the extra player cards, which means a few extra minutes of set-up depending on the player count.

Doing the Charades themselves is also a learning experience. The sweet spot seems to be that each little mime should be about a half second long. Of course, there are players who give just a little too much: doing a 5 second clue that not only covers the keyword but also the year it was released, how best to use it in a household setting and their preferred color of said item. Unlearning how to give as much information as you can in short amount of time and replacing it with short, preferably vague, clues is hurtle all new players have to learn the hard way.

Each in-game card features two categories. When you pick a category, you look at ALL the keywords under it in order to pick out the one that will be played that round. Maybe you don't remember them all throughout the game, maybe you do, but now you have that information bouncing around in your head when your turn comes up as The Pretender. And even if you only have only done one keyword from that list, it gives the illusion that you have already “finished” that category and that you should pick a different one. This leads to the biggest knock against this title. The more you play it, the more information you gather about the categories and the less you truly enjoy it. Our best experiences with the game have been with the “vaguer” categories such as “High Street” which, I'm sure, means more to U.K. Players than American ones. It roughly translates to “Main Street” here in the U.S. Not having a pinpointed reference point meant that this was one of our most fun filled categories. The lack of information was actually a enhancement. Others, like “Animated Films” or “Bad Habits” narrowed the field too much, making it almost easy for The Pretender to decipher the item at the end of the round.

During a couple of our games, I had the pleasure of sitting next to my youngest son, who LOVES picking out which keyword will be played by calling out it's corresponding number/letter. That meant that in games where I drew The Pretender card, I had a high chance of seeing 5 other charades before I had to fake my own. I am not sure if there is a need to try a different category selection method, but it is something I noted when playing.

All of our games turned into what the rules call an “Epic” game which is 15 rounds with scoring of a single point going to either The Pretender (for hiding their identity or being able to suss out the keyword) or the rest of the group for both picking out the pretender and not revealing enough info for The Pretender to nail the keyword. We also tried it with no scoring with the “play for fun” variant but still preferred scoring.

Finally, our “Pretender winning a round” stats were pretty high, starting with them usually being picked out by the group relatively easily but them getting the keyword about 75% of the time. As we played more and got more subtle with our clues, this dropped slightly but only to rebound back up as we “learned” many of the words in the categories. Which hearkens back to my original issue with the game, in that the more we played it, the less we enjoyed it. Playing back to back to back nights over the holidays, we became very familiar with the categories. I think playing at a more “reasonable” rate of once or twice a month, the intimate knowledge of the categories would fade, and make it bounce back in regards to enjoyability.

The Pretender has been a success at my game table. Of course, as with most games with category cards, you always wish you had more options and more cards. Sustaining the excitement and fun factor of the first few initial plays is the real concern, especially with a static gaming group. Only time will tell if my memory is as awful as I fear it is and all those keywords bouncing around will fade away and we can go back into The Pretender with a clean mental slate.

January 10, 2019
Rating
3.0
The Pretender
A mix of charades and social deduction where sustaining the excitement and fun factor of the first few initial plays is the real concern,
W
WadeMonnig Top 10 Reviewer 195 reviews

WadeMonnig replied the topic: #291212 31 Jan 2019 08:42
It was brought to my attention that "A Fake Artist Goes To New York" is very much along these lines, except using a drawing mechanism instead of a charades mechanism. Anyone have any experience with Fake Artist...?

Seems pretty natural that there'd be a "word" version, a "picture" version and now an "actiing" version, as it's a pretty solid idea for a party game.

mezike replied the topic: #291347 02 Feb 2019 11:16
I’ve played a lot of these as they are quite popular at our club. Fake Artist, Spyfall, Insider, pretty sure we’ve had some others come and go. You don’t really need the actual games to play any of them, just the rules, but the products have some nice components. The small canvas size works well in Fake Artist so I’d definitely recommend limiting the amount of space in which you draw. They are all fun due to that little subtlety of having to give away some information but not too much. Out of the ones I mention I’ve enjoyed Insider the most, I guess I just don’t enjoy being the faker that much and tend to give away too much information when I’m not.
Read More...