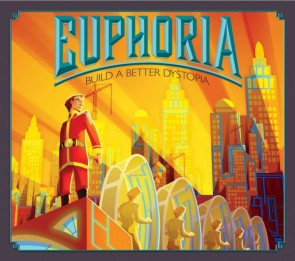 A Brave New World for Euro's

*chairs scoot slightly away from the table*

*chairs scoot further away from the table*

“...made by the creator of Viticulture..”

“It has worker placement..”

“...Dice worker placement set in a dystopian society where the number on the dice reflects their intelligence.”

*everyone sing songs along*“...It is not as complex as it looks”

“Not even a joke about a (Political Content censored) Supporter expansion pack where all the dice faces are 1's?”

“This discussion is over. A transcript of this dialogue has been sent to the proper authorities. Hail Hydra!”

Wow, does Euphoria ever look intimidating when you set it up on the table. My first reaction was to scramble to YouTube and find the “Watch it Played” with Rodney Smith video. Even after Rodney's excellent video, I still had my doubts. But, after a through reading of the rulebook and the excellent Tips for Teaching section, I felt confident in both playing and teaching the game. And, yes, it is not as complex as it looks. It is a worker placement Euro with some interesting takes on a variety of gameplay elements.

The goal of the game is simple: Place all 10 of your influence stars to win. Game turns are equally simple: On most turns it comes down to place a worker or take back your workers. It is the profusion of choices of where to place your workers that can be overwhelming. The recruit cards that you select at the beginning of the game give you a direction in which to start, the boardgame equivalent of an arrow pointing the way to a possible objective, if you choose to follow it. While the choice of placing or recovering a worker is simple, the twists put to both aspects are intriguing. Every time you remove worker or workers, you must roll them. If their “Knowledge” totals are equal to or greater than 16, your smartest (aka highest) worker runs away. The Knowledge totals take into account both what you roll and the Knowledge track on the board, giving it both randomness and a push your luck aspect if you have let your worker's general intelligence rise too high. And, while you can have up to 4 workers at once, do you WANT that risk when you pull them all off the board in order to place them later? In most worker placement titles, blocking other players from taking an action with your workers is almost a given. But Blocking other players isn't a true viable strategy in Euphoria because many areas either support multiple workers at a time or, more interestingly, are “bumpable” spots. If another player has placed a worker on a bumpable space, you can also place your worker in that spot but you “bump” them back to that player. This allows them to recover a worker without having to spend a turn “taking them back.” So, in essence, you are helping them out but it can also be used to force a player to roll that worker, possibly causing them to exceed the knowledge level and lose them.

Every faction within the game (there are four) has it's own area and, in turn, two markets in each area that you can assign workers and spend resources to complete.(Well, except for the Icarus faction, which floats above the rest of the world, I'm sure they have some unfathomable building codes).  How many workers are required depends on the number of players in the game. Once you complete a market, everyone involved in the process immediately places a star on it, and anyone who didn't help finish it, suffers a penalty. Since the markets are random and played face down, you are not sure exactly what you will gain or lose from this process. This will be one of the grumbling points for players, when they are docked with a negative because they couldn't or didn't work on a market. But the most interesting part that I found about this process is that you can buy into a market once it has been completed in order to nullify the negative effect in a reversal of misfortune. This is especially important in a two or three player game where, with a roll of doubles or triples on your workers (which allows you to place more than one worker per turn) , a player can effectively build a market in a single turn with the right resources.

There are plenty of paths to victory in Euphoria. Some would argue too many paths. But I really enjoyed finding the routes to placing stars that synchronize well with each other. If you push completing a tunnel into a rival factions area, you can bypass the groundwork usually required to getting multiple resources from a rival faction and, at the same time, not push ahead the allegiance track of that faction. But you do want to push some of the allegiance tracks ahead, preferably one that you have a face-up recruit of (allowing you to use the bonuses right away) or face down (allowing you to unlock that recruits power when you have advanced the track sufficiently).

The dystopian setting and “take that” oppression of the other players are a thematic breath of “fresh” (probably recycled, possibly laced with emotion suppressing drugs) air. Sure, the base resources are water, energy, bliss, and food and they could easily be grain or sheep. But I have swallowed the theme and, in the process, taken the red pill.

Take the Ethical Dilemma cards: it's a basic decision such as “Burn a Book/Read a Book.” Burning a book means you play a star immediately moving you 10% closer to victory. Read A Book allows you to draw two recruit cards and keep one. The recruits will possibly gain you a star later in the game and allow you to use their special powers once they become active. But, for the life of me, I can't bring myself to do the oppressive action. I'll take that chance, I'll bet on the recruit paying off later simply because that action “feels” right. Never mind that I'm actively exploiting workers to rise within a dystopia with tie breakers that include having low intelligence workers, I won't burn that book. Yea, so, I've bought into the theme.

Euphoria might raise a few eyebrows with a traditional Euro crew of gamers with it's (reversible) negative effects and recruits with powers that vary in helpfulness depending on the stage of the game. Worry not, just break out the advanced rules after the first game and you are guaranteed whatever gripes they have are addressed (usually removing much of the randomness, including some from the dice workers, so I can't say I'm a fan of all of them).

Still, at it's heart, Euphoria is a medium weight Euro. It is not likely to suddenly change your mind about how you feel about Euro's. It's still cube pushing and commodity exchanging (albeit with really cool looking cubes). It just has you doing it in slightly different ways on slightly different markets across the virtual world of Euphoria. It's quick, it scales out to six players well and puts forth a interesting setting and holds fast to it.

LazarusTNT replied the topic: #290106 16 Jan 2019 14:10
I hated it. After playing Scythe, I realized it was sort
Of like a tester model for the mechanics (especially point salad and influence) for Scythe.

WadeMonnig replied the topic: #290172 17 Jan 2019 13:13
As I said in the review, if Euro's aren't your "Jam" this isn't likely to change your mind. Still, I liked idea of "Queuing Up" in areas to collect resources (reminded me of long lines to get basic living items), the idea that you stand on the back of your workers to get ahead, and markets of useless items created to distract the masses. I'm sure I bought into more than the average player.
On the actual game, i was torn between a 3 and 4 star rating but after teaching this four or five times over the review period, I loved watching it finally click with someone. i could literally go "Aha, yes, they are going like Euros." It played great at 2 and scaled up to 6 perfectly fine, with only the expected game time increase. Can't say I'd want to play 6 all of the time but 4 is a good number. And rolling the intelligence of workers with that look of triumph when you hit doubles or that crestfallen moment when the total of the dice put you over 16 qualifies for one of those "moments" I look for in all games.

cdennett replied the topic: #290176 17 Jan 2019 15:29
I'm not shocked by the resounding "Meh" directed at this game, but it is the only Stonemaier (designed) game that I've held onto. It's solid and it plays differently then anything else I own. thematically it's interesting, if not completely solid. But I find it far better than being the best mech/farmer of the continent.

quozl wrote: Euros is a pretty broad term. Some euros I like, some I don't. What kind of euro do you think Euphoria is?

When I think Euro, I think lack of conflict, resource gathering/upgrading, where the "strategy" is attempting to optimize your turns so that you trigger then winning condition(s) before the other players. In short, trying to sort out their strategy and beating them to the punch.
I think Euphoria fits that criteria, but with luck and pushing your luck as an "X" factor. The "bumpable" spaces let you take almost any action you want but you could be pushing another player ahead, saving them precious actions in taking back workers. I like the "I can do that but SHOULD I do that right now? If I wait a turn, they will have to take their workers back and that is one less action they will have to progress to winning."
I hope that answers your question.

LazarusTNT replied the topic: #290179 17 Jan 2019 16:09
My favorite games are split evenly between Euro and Ameritrash. The thing is, it has to be fun. This game wasn’t fun. It felt like we were all trying to put boxes in the most optimal order so the game would end and the most optimal person wins. Just a really dry AF game.

If it makes you feel better, instead of the "Smartest" workers running off, you can just pretend they were found out by the government and were euthanized.

Of course, I'm not trying to convince you that you had a good time, I'm just relaying what I enjoyed about it.