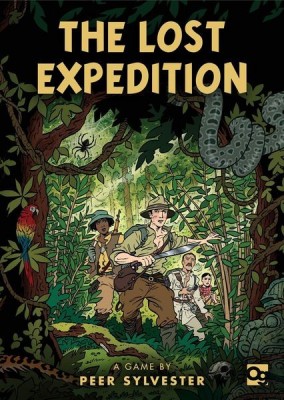 The box art has a charming Tintin look, without that annoying quiff. All pith helmets and tangled undergrowth. Inside there are two decks of cards. The big one has a tab to unwrap the shrink, but the small one doesn't. I try to open it with my thumb and, to my horror, I mark a card. Diving to the rulebook in a mild panic, I determine the damage is to a map card, part of the board. So that's okay.

My task is to guide three explorers through nine map segments by playing cards with a move icon on them. Simple enough. The trouble is that the cards have plenty of other icons on them which add or deplete resources like food and bullets. Even the explorers themselves are a resource of sorts since you can sacrifice their health or kill them outright. Keep at least one alive and reach the lost city to win.

First is the morning march. Here, you play a total of six cards and then resolve them in numeric order. So I start by playing a Jaguar, number 6. This gives me a choice: I can lose two health and discard the next card in sequence. Or I can lose a bullet and gain what the game calls an "expertise" in jungle survival. If I could get a tent expertise, I could use it to avoid the negative effects of number 26, Pounding Rain. But I can't get a tent, so I play it, planning to have the Jaguar discard it. Except if I want that to happen, I can't play any more cards between those two numbers.

Dammit. Perhaps I better think it out again.

I make it to the afternoon march. Here, I get to resolve cards in the order you play them, so I've got more control. This neat dichotomy gives a surprising amount of useful decisions for such a simple game. In solo play, you play a mixture of cards from your hand and random ones off the deck, for some added excitement. However, I note right away that that Jaguar might have been better saved for the afternoon, where I could position it to discard whatever I wanted.

The first day goes well, moving a few cards up the map thanks to some friendly natives and river rapids, at the cost of health. The second day is a disaster and I lose. It seems engaging enough, a little dry perhaps. I've been live-Tweeting my play and look back on the thread and see it. The story. I haven't just lost a game: I've lost one explorer to a scorpion, another to a thunderstorm and the third starved to death, alone, that night. Combined with the cracking cartoon art, there are more hooks here than I realised.

The Lost Expedition having thus actually lost, I set up for a second game, and start with a useless morning. One of my cards is Injury which is an awful card, with no benefits and no options to bypass it. But I've only got one card that let's me discard others, a Peccary. And to use that I need a compass expertise, which I don't have. However, I'm lucky enough to draw Healing Herbs off the deck which has a skip.

This is a morning march so the cards have to be in number order, and the distance between Healing Herbs and Injury is just too wide. So I play number 2, a native tribe card that lets me use a bullet to gain a position swap effect. This is really frustrating, as another choice on that card is movement. Still, it's essential. That sorted, later in the hike we use another bullet to shoot a Crocodile and keep it for food, one of which I sacrifice to bypass the Peccary.

A whole morning went, and we haven't moved at all. 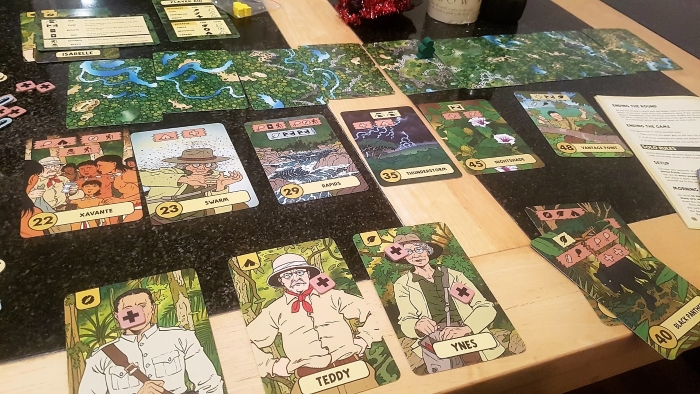 So the game goes, each play opening up more choices and a simple, but compelling narrative of tropical survival. Or perhaps tropical catastrophe as disease, death, and horrible ants stalk my first few expeditions. At last, I manage to save an unlikely situation where it looks as though a swarm of Vampire Bats is going to decimate The Lost Expedition. I spend two food in the Ruins to discard it. Then sacrifice a poor explorer to a hostile tribe to gain the last move needed for the sole survivor to stagger home for a hollow victory.

For the morning march, we cheat and essentially play open hands. This proves rather dull, so once we're good with the mechanics we apply the game's bolded rule that we're not allowed to talk about our cards at all. The afternoon march becomes a horrific comedy of errors as the explorers get shot at by Indians, nibbled by Piranha, infested by hookworms. It's chaos, we're all shouting at each other to do something, throwing away resources away like confetti and having a great time.

We lose, of course. But we're not done yet. At the back of the rules we discover yet another variant: a competitive version for two. This involves laying out two paths instead of one. We can play cards to whichever we like but there is, of course, a twist. After each is half-complete, one player gets to pick which of the two they want to take.

Cue the mind games. I'm not going to be picking first: my opponent is. So I'm sorting my hand, trying to lay neutral cards, saving up the horrors like ant swarms and electric eels to dump in their path when they've chosen. Yet I have to keep back useful movement cards like river crossing for the next march, when I'll get to pick. My opponent, meanwhile, is frantically playing the most hideous traps they can find, knowing they can force my down that route.

The result is, as you'd expect, a halfway house of horrors. Neither of our respective parties fare very well as we stumble toward the lost city. In the delight of throwing shade at each other we'd lost sight of the actual goal. Next day, we are more circumspect but we still die. My opponent wins, having moved furthest after shepherding their movement cards the best.

Same basic mechanics yet they make The Lost Expedition feel like a totally different game. Movement is still key, but in the frenzy of mututal destruction, planning a route with card discards and swaps goes out the window. As I pack the cards away it feels I'm packing a whole lost world into two stacks of cards in a tiny box. Yet more than that, it feels like I'm storing away three quite different lost worlds, best explored alone, with friends or with enemies. It's a feat of engineering that would put even a TARDIS to shame.

Writing reviews in this narrative style is an experiment, and I'd welcome feedback. It's also quite time-consuming, so if you felt able to follow me on Twitter or Facebook or even be so gracious as to back my Patreon, I'd be hugely thankful.

mads b. replied the topic: #290329 21 Jan 2019 04:18
This is a great review. I've been eyeing the game for some time precisely because it seems to actually tell a story. But would you say it's playable in the coop version with (board game savvy) kids?

It's been a favourite in my house. I established quickly that when playing we have to explain the choices on the cards thematically, and this usually lasts until things are getting desperate and then it disintegrates into just trying to survive the challenges. Fun though, and I try to challenge them to come up with new ones every time (rather than repeating the one about shooting the crocodile for food). The game has also firmed up Teddy Roosevelt as one of my kids favourite characters from history, which I am at a loss to explain.

Has anyone got the expansion for this? I don't think we need it at all, but I do wonder if it offers anything else worthwhile on top of what's already here.

edit: mads, it's great for kids. It's haaaard, but you can set the difficulty by cutting off a couple of jungle cards to shorten the journey. The art really is great, my kids really love it (although they are Tintin fans already so that probably helps). The rules are pretty straightforward. My kids are fairly savvy, 10 and 8, they play this one on their own, the 5 year old loves playing it but needs a little hand/reminders of the numbering system depending on whether it's morning or night and to try an think about the card re-ordering mechanism. But yeah. Storywise it's fun - like I said above it starts to get a little repetitive but you can work around that with a bit of thought.

mads b. wrote: This is a great review. I've been eyeing the game for some time precisely because it seems to actually tell a story. But would you say it's playable in the coop version with (board game savvy) kids?

Depends on the age but yes, totally - I played it a lot with my kids - 8 and 12 - and we all had a great time. The eldest also enjoyed the competitive game because she comprehensively beat me

A small word of warning: if played by the rules where you're not allowed to disclose what you're holding it's not suitable for "hand-holding" co-op play with quite young kids the way some co-ops are.

mc wrote: Has anyone got the expansion for this? I don't think we need it at all, but I do wonder if it offers anything else worthwhile on top of what's already here.

Glad you enjoyed it.

I've also got the expansion, but I haven't played it a whole lot. The biggest bit is a new set of cards which up the difficulty which isn't particularly what you want if you already find it tough enough. But there is a slew of variants in the box and I do like the new map cards and the companions. Both add some extra layers of variety and strategy, while the latter ease the difficulty level (and so can work to offset the new, harder cards if desired).

Jazzbeaux replied the topic: #290336 21 Jan 2019 06:41
Just been looking at Judge Dredd: The Cursed Earth which is apparently a reskin of this game. Your review above with Judge Dredd theme could be a winner!

Jazzbeaux wrote: Just been looking at Judge Dredd: The Cursed Earth which is apparently a reskin of this game. Your review above with Judge Dredd theme could be a winner!

It's coming soon - seriously! Just thought this needed to squeeze in first as it's the original game.

Legomancer replied the topic: #290343 21 Jan 2019 09:02
I really like this one, though the card shuffle can make-or-break. After a run of tough games I introduced it to two people, talked about how tough it was, and then we sailed through with no problems. It was sheer luck of the shuffle, but they were unimpressed.

My eyes perked up at the Dredd reskin, but I think I actually prefer the original. Haven't gotten the Fountain of Youth yet.

I didn't even know there was an expansion, although I already have the promo pack, which has a brutal card.