Game Name
Publisher
IELLO
There Will Be Games 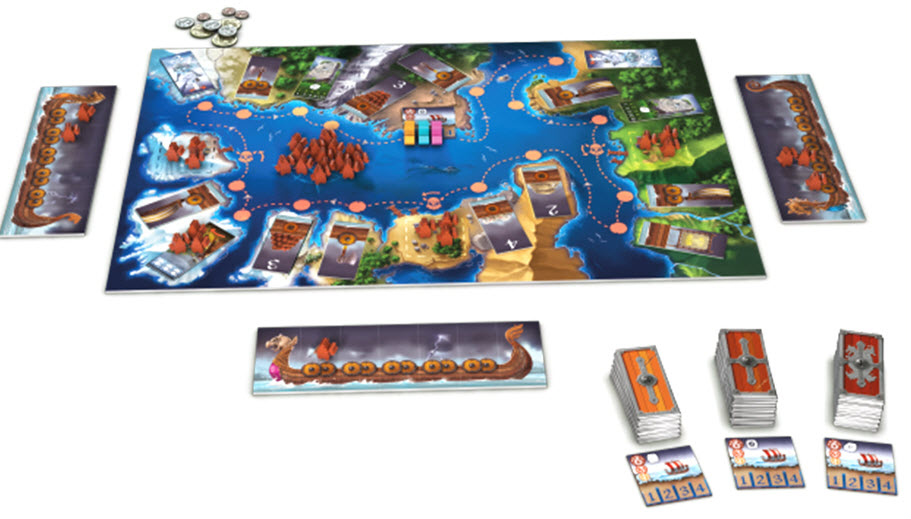 When I played Raids the first time, it immediately put me in mind of five games - Hansa, Fire & Axe, and Tokaido, Jamaica, and Champions of Midgard. There's a little piece of all four of those games in Dunstan and Gilbert's Raids, released late last year by French imprint IELLO. As a reader familiar with those three titles might surmise, this game is very much a traditional style Eurogame focused on light mechanisms, light competition, and light rules density. I like these qualities, and indeed I found that I liked Raids more than I expected to given that it did not feel very novel given the above comparisons.

The setting is a vague, Northern European region and the concept is that you pilot a Longship around a circular track slotted with Voyage tiles, stopping along the way to plunder, recruit Vikings, collect Runes, pick up or deliver goods, fight monsters, and improve your boat. But your boat only has so many spaces on it to hold Vikings (which you need chiefly to attack other players, as PVP is a factor) and anything else you load up on it. On your turn, you throw away all of the Voyage tiles between you and the next ship in front of you on the track. Then, you move directly to the tile you want, as far ahead as you'd like. It can be the next one in front of the leader or it can be all the way back to the starting point- it's your choice, and there is a racing incentive for getting back first during each of the four voyages around the route. There are some surprisingly compelling choices to make that impact turn order, resource availability, and direct conflict with other players.

Everything is expressed with simplicity and economy. Combat between players is sort of a stand-off with each player shedding Vikings until one player is out or has had enough. Monster battles are matter of stopping at one and losing Vikings based on their strength, with weapon upgrades mitigating losses. Runes provide VPs on an escalating scale, incentivizing collection. Some players may prefer to get ahead on the market path to victory, exchanging goods for lovely, clinky metal coins. It's a little point salad-y, and it is the kind of game where almost everything you do will get you some kind of points, but with a 30-45 minute running time and an overall handsome production it's hardly an offensive design.

It is very much, however, one of those games that I wish had been around 20 years ago. Not because it is somehow past its expiration date, but because it would have been a much more notable and acknowledged design. It fits right into the late 1990s/early 2000s style of German design, and all too often games of this caliber today are often ignored or quickly forgotten- witness Ethnos, for example. It is easy to lob the "lack of originality" complaint at Mr. Dunstan and Mr. Gilbert's fine work here, but it is a fun, easy to play title with a high degree of accessibility and family-friendly gameplay.

We really don't see a whole lot of "minigame" collections on the tabletop. Knizia's Neue Spiele in Alten Rom and that bizarro Friedmann Friese thing from a couple of years back are the only ones that spring immediately to mind. But 8-Bit Box, which presents itself as a "first generation board game console” complete with cardboard controllers and ersatz software, all packaged to look like a legitimate piece of gaming hardware, offers a new take on the game omnibus concept.

I love the packaging, and I think it is one of the coolest presentations I've seen in years. IELLO really went for broke on it, with SNES-style boxes and fully illustrated manuals for each of three included games. It's really kind of striking, and when folks see it on the shelf there is usually a double-take. It's really a lot of fun, and it's the kind of thing that can make even the most disinterested outsider want to have a look at what's inside. My wife actually thought it was a new console when she saw the box.

8-Bit Box ships with three pack-in titles and a set of common components - six controllers (each with three dials representing directions, shapes, and numbers), a pile of cubes, and five different D6s. Each of the individual game boxes contains all of the specific materials you need to play it- tokens, boards, and so forth. The idea is that 8-Bit Box can be expanded with additional game packs, offering new experiences and challenges that will continue to use the standard components.

This is a great idea, but it is also sort of oversold. The "tri-joystick controllers with digital rotation technology" and handful of plastic cubes and dice aren't much of a system, nor are they much of a foundation upon which to build other games. In fact, there are more components in the game packs, and to some degree it feels like the games are designed around the dial-based controllers more than anything else. And I would expect that future 8-Bit Box games would follow suit. With that said, 8-Bit Box is inexpensive, so it's not like you are forking over big bucks for some cardboard wheels and dice.

As for the games, one oversight is immediately apparent. None of the three are for two players. I think this is a big whiff, especially since there were three chances to provide a head-to-head option. I would have rather have had one two player-friendly game than a team-based 4-6 player one.

As for the games, Outspeed is by far the best, an F-Zero referencing racer that plays better than many other combat-racing games. In it, you program your turn on the dials with a track card indicating what happens with your selection of one of three routes. This is neat, because your choice may be limited by a route's capacity, potentially blocking your move, or you may have to expend fuel to move ahead more zones. Or, you might pick up Bonus Tokens like Ion Cannons, Forcefields, and Nitro. The game plays 3-6, and it's fast, simple fun. I almost think this one should have been developed a little more and released as a standalone, small-box game.

Pixoid is a 15 minute game of Pac-Man styled cat-and-mouse, but even in its brevity it's a boring game. Each round, one player gets to be Pixoid and 2 to 3 other players play the Bugs. The directional dials are used to secretly program movement around the maze-like Circuit Board. Pixoid has to try to survive as long as possible while collecting point cubes, the Bugs try to second-guess, outflank, and corner Pixoid. There is a modicum of drama when Pixoid gets into a tight spot and somehow manages to slip by the bugs, but it's over before you know it. It's really basic, not very engaging, and of the games it's the one you are most likely to play once and rarely, if ever, again. My kids, however, have especially enjoyed this one- my daughter noted that it reminded her of a tag game found in Nintendoland, for those 10 or 15 of you who might have had a Wii U. They've gotten more mileage out of it with their young friends than I expect most adults would. But here again, I'm not sure that this design couldn't have existed outside of the package - or if it would be commercially viable without the fun factor of it being a game for a "board game console.

Stadium is kind of the "big" game in the box, with a 40 minute play time and tabling 4-6 would-be athletes in two teams. A more gamer-oriented design, it's an interesting bidding game where players wager energy to compete in 10 out of 15 different sporting events in order to win medals. Each one has about a page of specific rules- you've got to roll dice and add it to your bid to jump hurdles in Equestrian, the Pole Vault is kind of a bluffing thing to see who will jump first, the Team Gymnastics event finds players bidding as a team against the other team, attempting to run them out without exhausting yourselves for the next event. My favorite has got to be the Anti-Doping Test where you can illegally dope to win extra medals but are stripped of them if the other team selects to accuse- there's a weird moral angle here that's sure to have everyone at the table laughing. I really like the concept of Stadium, and the idea of a bidding game that has a lot of different types of bidding is a good one (see: Modern Art) but this design feels a little cluttered and maybe even restricted by the 8-Bit Box concept. Regardless, it's pretty easy to play, and it's highly interactive and competitive. There's fun to be had in seeing how the events play out with differences in bidding method, communication limitations, and scoring variances. The biggest problem is that it's a 6 player game. The 4 player option isn't really worthwhile, it's one of those kinds of things where you need the maximum player count.

8-Bit Box is a neat idea, and I love the presentation, but I'm not sure the games contained are worthy of note because they just don't feel like there's much gas in their tanks, I'm not seeing these games having much longevity on most tables. Pixoid almost feels like a throwaway, the game you play first because it's the easiest and then never again. Stadium needs 6 players, but there's no way I'd reach for it over Modern Art or similar bidding games. Even Outspeed's fun feels limited- after three games, I felt done with it. But there again, this box sells for about $35 online and there is certainly an evening or two's worth of fun here and it is definitely kid-friendly. It will be interesting to see if IELLO- or even a third party- does more with the concept.