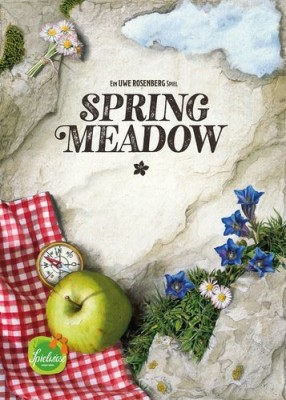 The hills are alive with the sound of varmints.

Is it too early to be wishing for spring? I've had my fill of winter in the U.S. Midwest, so thought of a nice spring thaw is a great board game distraction. So, hunker down at the gaming table, stoke the fire and take to the hiking trails of Spring Meadow.

Spring Meadow is the third in Uwe Rosenberg's “Seasons Trilogy” that, essentially, began with Patchwork. (I'm sure there is a Hobbit/Lord of the Rings analogy in there somewhere.) In all the games, you “Tetris” odd block shaped pieces onto your own personal game board. What varies are the rules, the scoring, and the various ins and outs of strategy. And this is where Spring Meadow gets everything right. Not to turn this into a review of the other releases in the Cottage Garden trilogy, but you won't find the convoluted scoring of Cottage Garden or the end game drudge of trying to finish a garden exactly at the end of the final round to avoid the negative point penalty. Instead, it flows (dare I say it) organically and scoring rounds are triggered by player actions instead of a set number of turns.

Each individual player board is peppered with burrows. These burrows are both a blessing and a hindrance. You aren't required to cover any burrow in order to complete a row, so it is a “free” space. In the same breath, if you do need to cover a burrow to place a piece, you lose the bonus point they provide and must place a Marmot, or, as they are referred to around our table, a “Varmint!” (and this is said with a distinctly Yosemite Sam accent) into a previously uncovered burrow. Avoiding this double docking of points is one of the first pieces of strategy you learn in the game. This is made easier by the fact that many of the pieces you will be placing actually have physical holes in them. Place one of these holes over a burrow space and you avoid the penalty and keep the bonus. The cute little Marmot (Varmint/Woodchuck/Whistle Pig) tokens are one of eye-catching parts of this game. If you think that is strange, it was the cat tokens in Cottage Garden that landed it in my collection. I figured if my wife wanted the game with the cute kitty tokens, I was at least going to get a Uwe Rosenberg title out of it.

While these previously mentioned holes in the board can be used as I described, these are the true key to the second tier of strategy within the game. If a hole of a meadow tile is adjacent to at least one other hole, it creates a group. Create a group of 2 holes and you gain single space rock tile, perfect for filling those annoying gaps in your rows. As the size of the group of holes you create increases, so does the size of the “reward” rock tile you receive, increasing to two, three and four space rock tiles in a variety of layouts, including the 2x2 square piece that is so coveted in actual Tetris. Plan your groupings well and it is like having a second turn each time you lay down a tile.

Spring Meadow uses a Hiking Map for the drafting of pieces with each player pickng from a row or column designated by where the signpost currently resides. The signpost is moved at the end of each players turn, so you can look ahead and see what pieces could be available on your turn, so you can plan accordingly. The Hiking Map also doubles as the trigger for each scoring phase. If there is ever zero or one tile left in a row or column at the start of your turn, everyone scores immediately. After your first few initial plays, this also becomes an opportunity for strategy, purposely taking what could be a less than optimal tile because you know it will trigger a scoring phase on another player's turn. While this is pleasantly referred to as a “Dick Move” in my house, the game balances it nicely with a small point bonus for the player deprived of a turn.

The boards for the supported four player's are double sided and can be played either horizontally or vertically, which negates any “sameness” occurring when playing multiple times. It is also aesthetically pleasing watching the snow “melt” to reveal the green underneath as you progress in each round (even if you are actually doing the placement of the green).

This is one of the few times that the estimated time on the box nails it. A two player game can easily be completed in less than a half hour; so quick that you think maybe you played the game wrong. I know that I am horribly slow at picking out a piece to play in these types of games but that problem hardly reared it's head in Spring Meadow. (Even in the two-player game, where all strategy must be completed in the time it takes for the other player to choose a piece.)

Spring Meadow is the true Crescendo of the Cottage Garden trilogy. It manages to provide the same engaging experience at all player counts without losing a beat. The simple “first player to win two rounds” victory makes for a quick tempo that begs for a repeat play like a catchy chorus.

January 25, 2019
Rating
4.0
Spring Meadow
Spring Meadow is the true Crescendo of the Cottage Garden trilogy. It manages to provide the same engaging experience at all player counts without losing a beat. The simple “first player to win two rounds” victory makes for a quick tempo that begs for a repeat play like a catchy chorus.
W
WadeMonnig Top 10 Reviewer 195 reviews

RolandHemisphere replied the topic: #291613 06 Feb 2019 07:46
I was under the impression that the trilogy is: Cottage Garden, Indian Summer and Spring Meadow.

It's the same here in the Midwest. We had one in our back yard when we moved into our house. When looking them up to remove him, I stumbled across them being called whistle pigs, which I just loved and wanted to include that little bit of info.

Not to be a pedantic jerk, but Cottage Garden is one of the games in Uwe's puzzle trilogy.

I'm curious if you played Cottage Garden and/or Indian Summer, Wade. Both were hugely disappointing to me (despite loving Patchwork), making me leery of Spring Meadow.

Not to be a pedantic jerk, but Cottage Garden is one of the games in Uwe's puzzle trilogy.

I'm curious if you played Cottage Garden and/or Indian Summer, Wade. Both were hugely disappointing to me (despite loving Patchwork), making me leery of Spring Meadow.

Yes, as I said in the review, I own Cottage Garden. I disliked the scoring and, more so, the "avoid negative points at the expense of building at the end of the game". Overall, not a fan of it. I've only played Indian Summer a couple of times and wasn't impressed enough to consider a purchase. However, Spring Meadow, avoids the pitfalls I found in the first two. You never clear your boards, they remain filled the entire game and the scoring doesn't happen at a fixed "round." It is easily the best of the trilogy.
Read More...