Chronicles of Crime Board Game Review 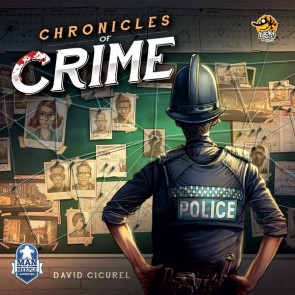 Game Name
Chronicles of Crime
Publisher
Lucky Duck Games
Designer
David Cicurel
There Will Be Games
When I was a kid, I was part of a very elite crime unit consisting of myself and the kid who lived down the street. Despite never actually solved any mysteries, we were fully committed to the Detectives Club and the secret handshake we made up to go with it. Thankfully, there have been a host of mystery/deduction games recently that have allowed me to don my metaphorical deerstalker cap and imagine life as a brilliant detective. (Or, as my scores often reveal, not-so-brilliant.)

Chronicles of Crime takes the fun of the classic Sherlock Holmes Consulting Detective game and modernizes it. Not only do the crimes take place in a contemporary setting, but also uses app integration in one of the most intuitive ways I’ve seen thus far in games. Everything you need to do in a case consists of scanning character, location, and/or item cards. Want to talk to the suspicious nanny about the missing child’s doll? Scan the nanny then scan the doll. A chunk of text will pop up on the screen as though the nanny is answering the exact questions you wanted to ask. You can also ask characters about other characters. Each player also has a forensic contact in front of them too. You can call your doctor, hacker, scientist, or criminologist friend and ask them about people or objects you discover. These experts will give you DNA results, psychological profiles, or background profiles of individuals in question. The world feels fully immersive and real even when you sometimes hit dead ends and there’s no connection between the two things you’re trying to investigate.

Whether you have a successful interaction or not, each scan takes up in-game time. You have a limited amount of time to solve the case, just as you’d expect in the real world. You have to make the difficult decision of backtracking to a previous location for 20 in-game minutes or just staying where you are and sweeping the whole scene for clues. Speaking of scenes, when you arrive at locations, you have the opportunity to look around. Holding the phone up, you can spin around in place, looking up and down and around a given location. (And if you have the unnecessary-but-kind-of-cool VR goggles, you can get a more 3D look at things.) You only have 60 seconds to do this, so you need to make sure you call out everything you see to your co-investigators. They’ll scour through clue cards trying to match up the earring you saw to a close-enough card (e.g., “jewelry”). While this real-time search may sound a little frantic, it actually ends up adding a sense of urgency to what you’re doing and gets everyone at the table invested in what otherwise might seem like someone else’s fun. You can also have someone else take a looking around the same location to ensure you didn’t miss anything, should you want to use up more in-game time to do so.

The buy-in with Chronicles of Crime is perhaps the most important element of the game. Unlike other cooperative games where you’re each taking turns to do actions to stave off the Bad Stuff, there’s no turn order or mechanics to speak of. The game is completely open, functioning more like an interactive novel than a structured activity. This means it’s up to the players to pass around the phone to read aloud the text, search locations, and contribute ideas. If you’re worried that someone at the table may take over the game, my suggestion to you is to not play with them. While this isn’t exactly revolutionary advice, my point is to underscore the importance of everyone getting into the experience. My group had a ton of fun not only with the mystery aspect of the game, but also making jokes about characters’ appearance, coming up with silly backstories, or feigning rage at our pushy police chief.

When you’re ready to solve the case, you indicate as such in the app. You’ll then be asked questions about the whos, whats, and whys of the case. You scan the appropriate character, clue, or location card to answer the question and afterwards receive a score. Things you were sure you had right may sometimes be wrong and there can be the occasional “What? That’s dumb!” reactions to some of the solutions (should you choose to see them). However, it could just be my ego’s self-preservation kicking in, trying to make myself feel better for not seeing the very obviously bloody shovel at the crime scene.

Regardless, my biggest gripe with Chronicles of Crime comes in replaying cases. You have to start all over from the beginning instead of resuming where you left off before choosing to solve. It’s off-putting to have to remember and go through all the steps from before, just to branch off on a slightly different path 75% through a case or try to find one more clue in a location that would’ve allowed you to answer correctly. The app does appear to get getting regular updates though and I’m hoping this is a sign for some more interface quality-of-life improvements in the future. Still, the app is very good in its current state and though it can get a little tedious to have to scan so many cards, I’ll happily take it over having to shuffle back and forth through a case book.

Chronicles of Crime really impressed me how easy it was to dive into the gameplay and plethora of cases to work through. My group still talks about how we need to go back and get a better score on some of our poorer performances, but I keep reminding them that we need to come up with a secret handshake first.

ThirstyMan replied the topic: #291292 01 Feb 2019 10:24
When I was a kid, I was part of a very elite crime unit consisting of myself and the kid who lived down the street. Despite never actually solved any mysteries, we were fully committed to the Detectives Club and the secret handshake we made up to go with it. Thankfully, there have been a host of mystery/deduction games recently that have allowed me to don my metaphorical deerstalker cap and imagine life as a brilliant detective. (Or, as my scores often reveal, not-so-brilliant.)

OK now we have the secret entry code dealt with, I think I like this app idea. I have Sherlock Holmes and the Cthulhu one but, you are right, there is an awful of flipping through a book, for both of them, and in some cases annoying typos and errors. I kinda liked that phone app where you go through a few Arkham adventures but ultimately there is not much meat on the bone for me. I do like innovative ideas with apps so I may give this one a shot.

SuperflyPete replied the topic: #291316 01 Feb 2019 15:04
Definitely going to buy. Thanks for the heads-up, Grace. I was wondering about this and how it would fare when considering it against the "Exit/Unlock" type games, and it sounds like it's right up my alley.

SuperflyPete replied the topic: #291317 01 Feb 2019 15:05
As an aside, it would be rad to have a link to Amazon here where ThereWill could get a portion of the sale as an affiliate or something.

SuperflyTNT wrote: As an aside, it would be rad to have a link to Amazon here where ThereWill could get a portion of the sale as an affiliate or something.

It's at the bottom of the article.

hotseatgames replied the topic: #291422 03 Feb 2019 19:44
My girlfriend and I tackled the first 2 parts of the first case this weekend. We did pretty well on the first part, and pretty poorly on the second.

I enjoy the game. I think it's smoother to play than Sherlock Holmes Consulting Detective, but I'm not ready to say I like it more or less than that one. The low tech SHCD still appeals to me.

I use my android phone, and you can continue cases where you left off. Also, I'll say that I really enjoy looking around the crime scenes, but spotting small details can be tricky, at least for me. I don't have the glasses. I was under the impression they came in the box, which they do not.
Read More...