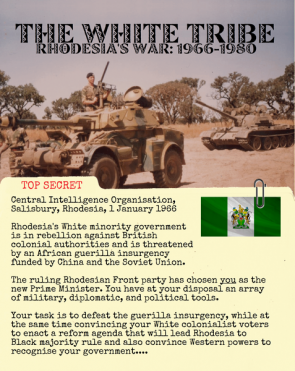 Until today, my knowledge of Rhodesia came from the voice of Bob Marley. He's singing it now in the background, as I scour the web for more detailed, if less impassioned, sources. Africans did a-liberate Zimbabwe in the end, of course, and the story of how it happened is on the table next to me. The White Tribe, a folio game on the Zimbabwe War of Liberation.

Colonialism is a common theme in games. The majority simply overlook it, as if the keening revenants of imperialism are mere phantasms, best ignored in the pursuit of Having Fun. The White Tribe, with its list of historical references at the back of the rules, is not one of these. Given that Rhodesia was a racist state, I am a little nervous to learn how the game will handle its sensitive subject matter.

Time to find out. I pin the thin paper mat beneath some Plexiglass like a butterfly and start punching counters. This is a solo game and while the rules are short, they're dense. I decide to dive in and get on with it rather than reading through first.

After a few turns, the shape of the game becomes clear. There's a lot of rolling on tables and charts for random events and how foreign elections influence the Rhodesian government. Each turn there's a historical policy for you to consider. Ignoring it or passing it has different effects. The first few are "conservative" policies, easy to push through my parliament of racists. Meanwhile, rebels are arming themselves in neighbouring countries and trying to creep over the borders. Most of them fail, discouraged either by local governments or my population, currently happy with the status quo. The two that make it through get pushed back by my security forces.

Then this forgotten corner of the cold war gets hot.

British rule in Botswana ends, and enemy units begin to appear there and come over the border. Swings to pro-liberal governments in Britain and the US reduce my income while supporting the rebels. A succession of bad combat rolls means I can't keep them out anymore. As a result, all thanks to the dice, my population begins to turn against me.

With the situation deteriorating, I can afford to ignore liberal legislation in parliament. This is difficult to push through, and doing so is risky. Failing to pass it makes the African population angry, but they're already angry. By this point, I understand that the goal of the game is to stabilise the country enough to transition to peaceful majority rule. Without liberal bills, my only hope to do this is to bribe black leaders to bring them onside.

It's expensive and my kitty is already running low, but I get lucky, and it works. The state of Zimbabwe-Rhodesia is born on a wave of popular support. Foreign governments shower me with praise and money. But it's too little, too late. Starved of investment, the army has collapsed and the country is overrun with rebel units. They reject my political compromise and stage a military takeover.

I look up from the table to the clock and am shocked to find it's taken me two hours to fail Zimbabwe. The voices of the warriors that fought there have carried me away. Loyal Rhodesian troops both black and white; nervous soldiers on loan from South Africa; US volunteers fresh from Vietnam.

That evening, I can't stop thinking about what they said. I rolled a lot of dice during my abject failure, but there are clear points where I could have chosen better. The combat table makes it easy to repel rebel units, but hard to kill them. In a sudden light-bulb moment, I realise this is deliberate design. It encourages me to take the historical decision to send my army abroad, where "retreat" results become "eliminated" ones. It's a risky pick as it causes international outrage if discovered, but sometimes I guess it's necessary.

The next day, I clear space on the table and try again. This time the early dice are very kind. Foreign governments stay pro-Rhodesia. The Chinese and Soviets squabble rather than fomenting the rebel groups that oppose me. Flush with cash I'm not spending on the army, I stuff the mouths of opposition leaders with gold and undertake public works to boost my popularity. Riding a wave of support, I try to get those liberal bills through parliament.

The first succeeds. Rhodesia becomes an independent state not as a racist republic but as a relatively equal one. Actual integration, though, proves a harder pill for the white politicians to handle. Each time you fail to push legislation through there is an election, determined by the result of two dice. These can get expensive. The integration law fails and fails again, eroding my cash and popularity each time. The third roll is awful and I'm booted out of office. 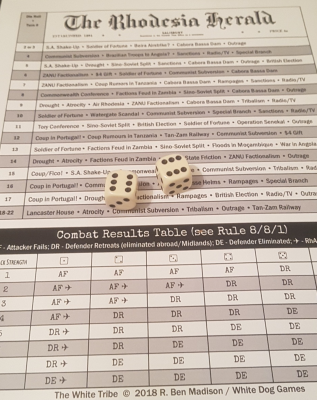 This time, the clamour I hear is that of politicians. The actual prime minister of Rhodesia, whose boots I'm filling in the game, was Ian Smith. He was a racist who garbed his vile views in admiration for the orderly oppression of the colonial bureaucracy Britain left behind. Much ink was spilt in his time, and in the designer's notes, refuting his opinions. But the worst thing is that his fears proved well-founded: Mugabe abused liberation to impoverish and murder his people.

Determined not to let those people down, the next day I try again. The board starts clean, shiny with plexiglass, like the hopes of Africans of every creed as imperialism waned. Then, funded by communists, the guerillas begin their buildup. I don't risk anything on the political game, for now, opting instead for surgical strikes into Zambia to thin their numbers. The rebels in Mozambique, deprived of the leadership of the imprisoned Mugabe, fight among themselves.

I have to release him in the end, forced to start liberalising policies like detente to counter the simmering resentment of ordinary Zimbabweans. But although my popularity takes a hit, parliament bends to the will of the dice. Legislation to improve the lot of the needy goes through. The borders hold steady until disaster strikes. A random event sees a foray into Tete province discovered, and international condemnation is swift and brutal. Starved of money through sanctions, my army withers on the vine and the rebels take over. Again.

I hear them, chattering excitedly and firing weapons into a Red dawn which will soon be washed with the crimson blood of their countrymen. The game has pulled me in, again, with its compelling alt history then thwarted me, again, with dice. But beneath the rattling, there are voices I have never heard. Those of the dirt poor Africans who suffered under Smith, again under Mugabe and again under my failed guidance. The White Tribe is a great game, but I'm still waiting for one that, like Bob Marley, will try to speak for them.

January 31, 2019 (Updated: January 31, 2019)
Rating
4.0
The White Tribe
Despite being dice driven and infuriatingly hard, The White Tribe is an unusual and engrossing meld of warfare, politics and history which handles its sensitive subject matter well.
MT
Matt Thrower #1 Reviewer 286 reviews

Dr. Mabuse replied the topic: #292490 18 Feb 2019 03:06
Matt who published and designed this? It reminds me a lot of the now out of print game called Liberia: Descent Into Hell by R Ben Madison and Wes Erni (Counter Strike Games).

Dr. Mabuse wrote: Matt who published and designed this? It reminds me a lot of the now out of print game called Liberia: Descent Into Hell by R Ben Madison and Wes Erni (Counter Strike Games).

It's the same Ben Madison. I think he views these games as a kind of evolving series on political warfare.

Jackwraith replied the topic: #292549 18 Feb 2019 14:58
This is interesting. As you pointed out, the game is kind of attempting to steer you toward the politically, ethically, and morally positive outcome of a very ugly historical scenario. That said, I can't think of too many other history-based games that I'd be less interested in playing. The history of Rhodesia is one of the more prominent WTF? moments of the latter half of the 20th century (amongst quite the list) and I just can't see myself sitting down to immerse myself in it for an extended period of time.
Read More...