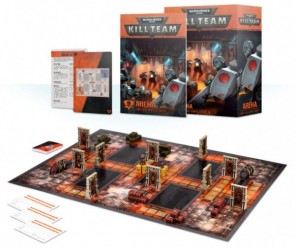 Many Kill Team Players are asking the question, "Should I Buy Arena?"

The new expansion for Warhammer 40k Kill Team is a set of rules and terrain specifically geared toward balancing the gameplay experience for competitive, organized play. While this is likely a worthwhile goal for Games Workshop as a standardized format and support for event or league based play in shops is an effective marketing strategy, for those of us who don't engage in organized play Arena might not quite be a must-have addition to what I consider to be one of the best miniatures game system that Games Workshop has ever produced.

This $90 retail box set comes packed with two identical, double-sided boards and a set of terrain- mostly repurposed and familiar barrels, crates, pipes, and doors. There's of course a rulebook, which is mostly composed of the Ultra-Close Confines rules from the Rogue Trader expansion and numerous setups and scenarios that are designed to offer the much-ballyhooed balance that competitive gamers desire. There are even specific ways that you are supposed to arrange the barrels and crates to ensure that both sides get a symmetrical layout.

At its price point, it looks expensive compared to the also just-released Sector Fronteris Kill Zone, but the two boards and scatter equal four new indoor, "Zone Mortalis" style Kill Zones complete with their own environmental rules that fans of the Rogue Trader scenarios or even Necromunda will likely enjoy. This more "dungeon-y" style of play among corridors and doorways tends to balance out extremely shooty factions like Tau and heavy weapons like the infamous Deathwatch Frag Cannon while increasing the viability of more melee-focused or short-range teams. It also has the knock-on benefit of being easier to set up and play with, as effectively the games become more of a 2D board game without any kind of elevation or diverse terrain types.

But there is also a sense that some of the wild imbalances and narrative opportunities suffer in favor of stability, and for more casual players this could be a disadvantage to this gameplay format. With all of the awesome Kill Zones available, so many different environments and fun asymmetrically lopsided missions available for the game, a completely level-set experience may not be what some folks are looking for. I find myself vacillating between enjoying a very stable, very symmetrical experience on a simpler, mostly 2D board and favoring the more baroque gameplay with Sector Mechanicus gangways all over the place and big ass Ferratonic Incinerators and so forth turning the battles into very vertical affairs

As far as the Arena gameplay goes, it's actually quite excellent, even for a casual player. An Arena game finds players selecting three objectives, with one being secret. These score VPs in conjunction with controlling specified areas or objective markers on the board, but the amount of points you score from the stock "Take and Hold" condition is limited so that your personal objectives are incentivized. Matches are four rounds, so fast action and aggressive play are often rewarded. I like the slight modifications this format introduces. It's interesting because in some ways all of this moves it toward feeling more like Warhammer: Underworlds, especially in the emphasis on claiming objective conditions, taking and holding, and doing so under a tight schedule. It is still a full-on miniatures game though, with measuring and datacards and the whole deal. So it feels almost like a halfway point between Underworlds and the standard Kill Team game. I know some people wanted Kill Team to be a 40k version of Shadespire and although this is not exactly that, it's not terribly distant and I can definitely see it gaining traction similar to that game in competitive circles.

Regardless of the product's intent, I'm finding that Arena is actually worthwhile even though I have virtually no intention to play competitively or in an organized play structure and the included tournament guidelines might as well be blank pages as far as I'm concerned. The ease of setup is meaningful to me, as this kit makes it easy to setup and play a stable and balanced game quickly, and the games tend to be faster-playing than a typical Kill team game. I also really like that there are new "Battle Brothers" rules for 2 versus 2 play, which increases the value of the game as a whole as it creates an official multiplayer game that is well worth playing, with its own special objectives. There are also rules included for those that want to roll the missions included into a Kill Team campaign and guidance for creating randomly generated "Ultima" missions using Arena materials. Casual players should be aware that there is more dimension and value to Arena than it being just the "competitive play" expansion.

So this review is mostly a recommendation, but I find myself halting at suggesting it to all Kill Team players and not just because it's the kind of product that not every player needs to own- one copy per group is really all you need here. I have every released to date, so I'm always ready for something new even though there is still so much mileage left in the core game without Arena. But Arena doesn't quite feel like something new, the format feels more like a minor revision- and I'm not really sure we need a new format so soon after the initial release. This makes me sort of wish that these rules were either initially included in the base game, presented in White Dwarf, or that they maybe even were the format presented for the game at the outset. In fact, I kind of wonder how the design of each model's rules and stats might have been affected if they were written for a balanced, symmetrical game given that the minor rules changes, objective focus, and close-quarters combat emphasis mix up the meta.

An advance review copy of this title was kindly provided to us by Games Workshop- we thank them for their support of quality written games content. There Will Be Games accepts no payment or editorial direction from publishers or designers.

February 04, 2019
Rating
4.0
Warhammer 40k: Kill Team Arena
A worthwhile expansion that may not be a must-have for all players.

GorillaGrody replied the topic: #291491 04 Feb 2019 20:14
Well, I did it, I ordered it, strictly on the basis of the suggestion that it features a more board-game-like experience. I may get more people to play it with me if I explain it like that. Plus, it seems to be disappearing everywhere.

Michael Barnes replied the topic: #291492 04 Feb 2019 21:13
I’d exercise some caution with that- it is still a measurin’ game. And some board gamers quail at that. But yes, I do feel like the simpler, symmetrical layouts are more board gamey, as are the stock VP objective. I’d advise that you set up a couple of 60-70 point teams ahead of the game. Fill out the cards and everything or use the preprinted ones from the faction starter sets. Hide the prep work!

Also...this sounds really trite...but use the measuring strips that come with the game, not a tape measure. Board gamers aren’t as hostile to real game components. But you put that big ol’ Stanley contractor tape measure out there...

SaMoKo replied the topic: #291499 05 Feb 2019 07:27
I won’t bite on this purchase, I enjoy the swingy balance of the regular game. More importantly, something is lost in the transition from beautiful, open terrain to a cramped dungeon.

Melee does sometimes struggle in the core game of Kill Team. The answer is to add flexibility to the use of terrain. I’d rather see Games Workshop create a point cost for manipulating terrain, adding balance without forcing a dungeon. Taking some Boardgaming sensibilities, a bidding system could work well here.

As is, my orks can always shoot back as the charge forward. They may believe in aiming, but I can guarantee at least one rokkit will turn a marine into a puddle of grott juice!
Read More...