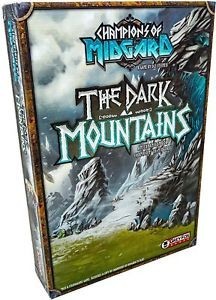 The Dark Mountains expansion adds black as a new player color for Champions of Midgard and expands the player count to five players.

You're still here? This review is done. That's all I needed to know to pick it up. It's over. Go home. Go.

The Dark Mountains expansion is also home to the Bragensire...the Brokebacksiger...the trumped up Hill Giants who identify as Mountain Giants. Adding a new sideboard, these giants are only accessible via Land Travel. Like the monsters found in base Champions of Midgard, you must navigate dangerous situations to reach and battle them. You don't need to bring food for this journey like the monsters in the base game but, on the flip side, they never get gold added to them as an incentive to battle them and they are not purged at the end of a round. According to the instruction manual, of the 24 Land Journey cards, 12 are negative, 2 are (possibly) positive and 8 are all quiet. In reality there are 10 all quiet cards (possibly a last minute balancing addition which would also explain why it states there are 24 total cards but only lists 22 of them). That means there is a 50% chance of getting a negative card when doing land travel (or roughly the same as walking across the street in Los Angeles without getting honked at). Geez, NOW I know why the Vikings took ships everywhere.

When I say the land travel cards are negative, some are game crushingly bleak. Draw a Blizzard card and you must pay 1 gold for every warrior you brought or lose them. Hit that early in the game before you have sufficient gold and it is devastating. It's all about the GP in the Dark Mountains: Pay two coins to the Bandits, Pay two coins to hire a guide because the path is blocked. Pay one gold to hire a lone warrior. Oh my god, I finally get it: The Dark Mountains is behind a paywall! Hold on, I'm going to go check for a Activision logo and a Lootbox option. But all of this risk must be rewarded heavily, right? You can win a new archer warrior or, wait for it, maybe two archer warriors! This must be why the coin icon is featured on the mountain sideboard, it's like going into Las Vegas where the house always has an advantage. Playing COM with just the Dark Mountains expansion and you'll find it doubles down on the Las Vegas metaphor, where only the desperate or the rich will venture there. Still, the Archer dice are quality warriors, only having one blank face and three double hit hunting sides that net you 50% more food when used in that capacity. But, if you rarely venture to the hunting grounds, you don't have a real incentive to possibly lose two, three or four dice to get that one hunting dice reward.

Other notable additions are: Two new viking leaders for players to choose from, new rune cards, and new enemy cards. I can't say either of the new leaders were ones that I rushed to try. Randhild the adviser let's you take a swordsman, spearman or Axeman dice when placing a worker in the Jarl's Longhouse and Jorunn The Traveler gains 2 glory each time she draws a “All Quiet” card when on a journey. I do dig the new rune cards with Patience (allowing you to clone another rune card) and Friendship (you and another player discard a blame token) getting lots of attention when they come up. Finally, the new enemies introduce some cool new concepts. They give some bulk to the Troll cards with the powerful Troll Lords that put up an actual fight but allow you to discard a blame AND give every other player a blame when you defeat them. Some of the new monsters now have a * instead of either an attack or defense value. Sometimes this means that instead of a normal attack, the monster just slays any dice that comes up blank. The most evil of these is the Seidr Draugr that gives one blame the the beginning of every round of battle but never slays any of your warriors. Sounds pretty cool right? Except if it is a night when the dice are hating you and you bring three Swordsman dice to battle his three hit point ass and you take six freaking rounds before managing to kill him it. Six blame in one turn...time for a rework the entire strategy for the rest of the game.

I'm going to include a few shots of the card color difference in the media for this review. I know color matching isn't the easiest thing in the world but the black in the base game compared to that in my copy of this expansion is over the top. The expansion cards stand out. Period. I'm hoping/thinking this isn't the case with EVERY version of this expansion but holy smoke-colored cards. Maybe the Dark Mountains are just really smoggy?

The Dark Mountains is a “Moar Stuff” expansion, which I totally do not have a problem with. If I enjoy a game, giving me more of what I want is something I am down for in an expansion. But the “more stuff“ that The Dark Mountains just made me shrug and say “Meh.” This would be the point in a review where many writers would tell you how you really don't need/want this expansion. Except, plot twist, you actually DO want this expansion. Not for what it does alone but what happens when you combine it with the Valhalla expansion. Dark Mountiains should have been combined with Valhalla as a single expansion. You can actually purchase it that way (along with upgraded components and a larger box that holds both the base game and the expansions) directly from Grey Fox in the Jarl's Edition. It has the same MSRP as the base game, which sort of scared me off, but after purchasing both expansions separately, I regret not getting the Jarl's Edition.

February 24, 2019
Rating
2.0
Champions of Midgard: The Dark Mountains Expansion
Plot twist: you actually DO want this expansion. Not for what it does alone but what happens when you combine it with the Valhalla expansion. This should have been combined with Valhalla from the start as a single expansion.
W
WadeMonnig Top 10 Reviewer 195 reviews