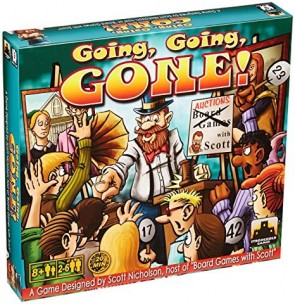 Well I went looking for a discounted board game auction
When I saw something I just had to have
My mind told me I should proceed with caution
But my wallet said to go ahead and make a bid on that.

Welcome to Discount Dive, where I search for board game titles with slashed prices. This dive had me surfacing with Going, Going, Gone from Stronghold Games. Ignoring the cringe inducing cartoon box art, I snapped this title up on clearance for a mere $10.00.

Inside the game you will find: an auction paddle that doubles as the rule”book”with a short, floppy handle that was doomed to break; 5 semi-transparent ramekins (My wife always calls them ramekins, I don't think I had heard the word until a few years ago but I guess it's better than saying “little cups”); six different colored cube sets of 40 cubes apiece; a deck of item cards and... that's it. The biggest thing on/in the box is the MSRP of $49.99 USD.

Standing back and looking at the game, it should be all about the math. You bid on cards to create sets, either matching them using the displayed flag on the card or the item that is displayed. Sets increase in value as you gather more of the matching icons. So, the base price to get a card should be a couple of “bucks” and then “math” your way up, deciding what is a practical price per matching card ratio. Sound boring? Don't worry, it never actually plays out like this. Instead, it is anarchy with buyers regret, uproarious laughter, and “Whoops, I don't think that was even the card I wanted.” All of this is because you are bidding on multiple auctions/cards at once, in real time, by tossing cubes/bucks into the ramekins.

You start the game with 25 cubes in your “bank.” These are the bucks you are going to be bidding with. Throughout the game, you have the option of selling your collected sets for more “bucks/cubes” so, when running low on funds, you can bid on other auctions. Bigger sets are worth bigger bucks but if you don't have the money to bid on something, you have to cut your gains/losses and generate more money by selling smaller sets. At the end of the 7 rounds, when you add up how many bucks you have spent and earned from selling your collections, you can find that half the players have LESS than the starting 25 cubes and you think “Hell, we would have been better off just not bidding on ANYTHING!” But you don't care, because it was fun. Still, if you come into GGG looking for a precise, think-y auction game (and why wouldn't you?), you'll likely be put off by the chaos (good-natured or not). It is not an auction of the Ebay kind. It's in-your-face cube tossing and the only Ebay-ish element is trying to snipe a single auction at the end of the countdown while managing 4 others at the same time.

The game has the weirdest iconography on the cards. The first question is: Why? The pictures on the cards are of identical items and it's not like they are language-dependent: One is a picture of a phonograph. Another is of a teddy bear. But, they include an icon: In the case of the above-mentioned ones, it's a miniature silhouette of a phonograph and teddy bear... fantastic. All of the other icons are squares, square with a border, or a slightly askew square. It feels like the icons were included as a weird inside joke and I just missed the punchline.

Going, Going, Gone is good filler. It is fun and fast. I would have been distinctly disappointed if I had payed the full MSRP, but snapping it up at ten bucks means that it comes out often enough that it won't be on my purge list anytime soon.

February 26, 2019
Rating
2.0
Going, Going, Gone!
Going, Going, Gone is good filler. It is fun and fast. I would have been distinctly disappointed if I had payed the full MSRP but snapping it up at ten bucks, it comes out often enough that it won't be on my purge list any time soon.
W
WadeMonnig Top 10 Reviewer 195 reviews