Years ago, D. Brad Talton Jr. sent me a copy of his game BattleCon. I liked it quite a lot - it was an excellent attempt at bringing the action of an arcade fighting game to the tabletop. At the time, that game's chief competitor was David Sirlin's Yomi- a design that I absolutely loved. Over the years, my interest in Yomi waned and updates to BattleCon kept it fairly current as Level 99 Games staked a claim for itself as the premiere publisher of games with video game and anime settings - witness the excellent Argent and Pixel Tactics games. I played an early, preproduction version of Exceed some time ago and liked it, mainly because it felt like a somewhat streamlined, more focused variation on some of the concepts present in BattleCon. But it wasn't until a couple of weeks ago when I was sent a review copy of the new Exceed: Street Fighter game that I really dug into it - and found that the Capcom license paired with a simple yet rewarding card game design is a total knockout.

The starter set I got features series hero Ryu, hirsute Russian Zangief, kickboxer Sagat, and the demonic Akuma - I had to grumble a bit that Guile (my main) wasn't in this box but he's in one of the two others each featuring four characters. You get four non-collectible, non-customizable decks in the package each with its own box and a couple of player aid cards. Each deck features a set of standard cards along with the specific cards for each fighter- all of their signature special moves are here, and each card also has a "Boost" effect that can give you a one-shot or ongoing advantage that you pay for with "Force" (i.e., discards). You don't need any tokens or extra components - just a way to track life. You can carry a couple of decks in a jacket pocket for an analog Street Fighter match anywhere.

There are a few key concepts that to my mind have to present for this whole fighting game as a card game thing to work. One is a sense of real-time, concurrent action. Another is a representation of the physical relationship between fighters on a 2-D plane - "spacing". Still another is a creation of tactical, on-the-fly adjustments, corrections, and reactions based on initiative, timing, and range. The Exceed system captures all of the above smoothly and organically, leveraging a framework that I am just about 100 percent sure Mr. Talton derived from Reiner Knizia's En Garde (or Duell).

Each player has a character card that moves along the spaces of a 9-card row. Moving forward or backward is one of the standard actions you can take on a turn, and this is critical as each attack card has a range - important for selecting either the Hadoken or the One-Inch Punch. The core Strike action means that both players play a card face down and reveal. A Speed statistic determines which attack goes off first. If the amount of damage done exceeds the armor value on the opponent's card, they are stunned and can't counterattack. Or, your attack may have an effect that knocks them out of range. There are other elements in play as well, such as before/after attack card abilities, playing two matching strike cards as a Critical Strike to give its numbers a +1 bump, and the effects of any Boost effects that you might have in play.

Successful Strikes (and Blocks that are effective) go into a Gauge area. From there you can spend them as Force to do a couple of things, such as permanently flip the character card over to its powered-up Exceed state or to pay for the ability to use a character's unique attacks. As the game progresses, it also escalates as Gauge builds for both players, creating a wonderful tension and sense of growing power. Each of the characters' Gauge-oriented moves also bring out the sharp differences in fighting styles, and just like at the arcade or on the console learning each fighter's strengths, weaknesses, and exploits is key to victory. 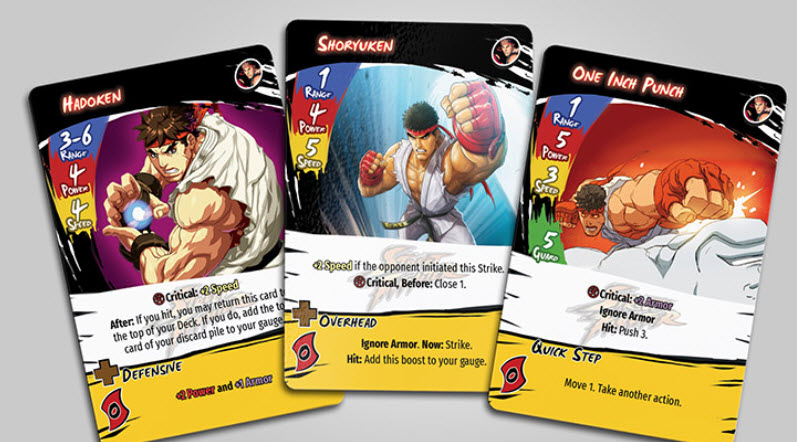 It's a 15-20 minute game packed with drama, reversals, and sometimes brutal action. It's true that a player on the ropes sometimes stays on the ropes as their life slips from 30 to 0, but it never feels arbitrary or unlucky- there are always options, including actions that you can take regardless of a bad draw- such as moving out of range or discarding to get more card options in hand. If nothing else, if you have a hand you aren't happy with you can always draw a "Wild Swing" card to see if you might topdeck an effective card during a strike- I suppose this is the "button masher" option.

I think the biggest question, other than "does this game represent Street Fighter successfully of course, is what differentiators Exceed offers to a market filled with various CCG options, two player games, and other games that have attempted this kind of thing in the past. This is a quick-playing card battler that doesn't require deckbuilding or additional purchases. It introduces some unique elements in this space, including simultaneous reveals, which allow for bluffing and calculated risks as a reward for learning the cards. There is substantial depth here, and the design's commitment to representing the fighting game format down to the spacing of characters means that there is a feeling of somewhat more detail than is usual in the card game space. It's not Magic or Dominion in Street Fighter cosplay.

Finally, a note on that license. Although the game would be and is great with Level 99's in-house characters (and Shovel Knight, apparently), I think the Street Fighter brand does nothing but elevate this design. It's like how superhero games without a Marvel or DC license always feel lacking somehow - this edition of Exceed feels completely at home and living its best life with Ken, Ryu, and the gang on the cards.