Get Me a Fresh Brain! Board Game Review 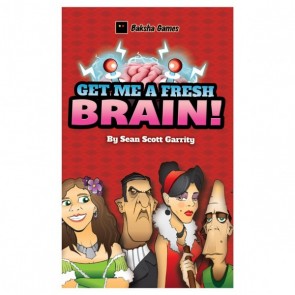 Game Name
Get Me A Fresh Brain!
Publisher
Baksha Games
Designer
Sean Scott Garrity
There Will Be Games

Like it or not, first impressions are key when it comes to board games. I always want to give a game a fair chance, over multiple plays with a varied group of gamers before I sit down to write a review. But a negative first impression can be a hell of a speed bump to get over.

Get me a Fresh Brain! (Previously known as “Good Help”) stumbled to my table on it's first night. The box is bursting with cards and tokens. Like, literally bursting, the only thing holding the lid on the box was the shrink wrap and, once you get everything punched and sorted, the situation only gets worse. But I digress, we were getting the game out, not putting it back at this point. I had pulled everything out, punched it, bagged it and read the rulebook twice before we even approached our first game. The gameplay seemed simple enough: Visit town locations, get body parts, build a monster, wreck havoc on the town. The rulebook seemed a bit unclear but that would all straighten itself out once I had my eyes on the actual layout, right?

As it turned out, that wasn't the case. There were plenty of rules that we were unaware of until we got a card that says “You can break this rule” For instance, nowhere in the instruction guide does it say that an assistant can only carry one item at a time. However, we realized this was a rule when we drew an assistant card that stated “May carry up to two items at a time.” This was made more confusing as the instructions specifically state that you can only have one type of body type in your possession at a time but we deduced that “your possession” meant between your two assistants. Other cards just made us shrug, like the Red Headed wig card which states that any assistant wearing it is treated as if they had red hair. Is this an advantage? Is this an disadvantage? Is it both? Does it matter if they are also a step child?

Unfortunately, the “hits” kept on coming. There is a convoluted diagram showing what locations are adjacent to others but fails to show that buildings in “town” are only considered to be adjacent if they are directly next to each other, which may seem like a “Duh!” moment but the en route location cards are considered adjacent to EVERY town location. Even the most basic items were confusing: Each turn you get a Doctor action and an Assistant action...oh wait, I can move both assistants during my assistant turn? Even the simple action of giving money to an assistant (which you constantly do) takes both a Doctor action to give the money and an assistant action to receive the money.

The further we progressed into the game, the more times we had to retrograde various rules. Whoops, it says your Doctor can't be in same place as an assistant carrying a body part. Does that include equipment? Umm, well, from now on it includes equipment. This card says it stops an assistant from entering a Vice Shop. What's a vice shop? Well, let's assume it means they aren't tempted by the Vice Cards? Okay, going forward we'll accept that is what it means.

And maybe if the gameplay was exceptional, one might overlook these issues as a few bumps on the path to the castle. But even the “Take That” elements are more frustrating than fulfilling. Assistants can run off if tempted by a vice card or they can be assaulted and have items stolen. Being with a Doctor can prevent this from happening but doctors also can't be seen with an assistant carrying a body part. So, it seems logical that you would want to travel with your assistants but it is only the illusion of a choice since you can't actually do it a significant portion of the time. And this steers you toward a “King of the Hill: Munchkin style” pile on of the current leader. The leader prays they draw the carriage card so they can bypass the bad part of town where everyone else is beating up their assistants for their lunch money.

Other aspects of the game also gives the illusion of choice: There are negatives on some assistant cards that are rewarded late in the game in the form of the assistant being cheaper to “pay off” when building your monster. However, all the assistant cards are handed out randomly at the beginning of the game, so it isn't actually a choice you make but, instead, a restriction you are saddled with.

Get Me a Fresh Brain! is not without some interesting moments. You need to decide if you want to build a monster quickly, with not so fresh parts or if you want to attempt to build a stronger, better monster that could fare better in a monster-to-monster showdown (if it comes to that later in the game). One particularity awesome rule allows you to attempt to use your male assistants brain if you have gathered everything but a gray matter needed to jump start your creation. Sorry, Igor, but this is for science.

On the component front: Aside from the previously mentioned issue with fitting everything into a too small box, I'd like to relate this story. I have a junk drawer with a Board Game section for all the pieces that were somehow left out or dropped. It is the current home to a couple of Get me a Fresh Brain tokens. The game has teeny tiny coin tokens and teenier tinier negative tokens that get placed (and inevitably lost) on body parts that decompose. While most parts of the game are of sufficient size, these coins and negative tokens are a pain to work with.

Let's be brutally honest here: You can't unring a bell and you can't unwrite a confusing rulebook. Somewhere along the process of releasing this game, it should have been fixed. When bringing Get me a fresh brain back to game night with the original group I played with, it was met with a resounding “No Thanks.” Even after taking it to an entirely different group, where the initial fumbles were not repeated, it still received a politer but no less definitive “Let's try something else.” when proposing we play it. It has some cool concepts and a cool theme, it just fails to bring them all together to produce a cool experience.

February 28, 2019
Rating
2.0
Get Me a Fresh Brain!
It has some cool concepts and a cool theme, it just fails to bring them all together to produce a cool experience.
W
WadeMonnig Top 10 Reviewer 195 reviews

Gary Sax replied the topic: #293460 06 Mar 2019 12:04
It's impossible to generalize about kickstarter, of course, but I think my least favorite genre of kickstarter is the mainstream-looking board game, often with "cute" art. Exploding kittens, things like this.

WadeMonnig replied the topic: #293507 07 Mar 2019 15:43
IMHO, the biggest problem with crowdfunded games that I have played is that no one was "there" to say "You know, sorry if I hurt your feelings but this bit here and here needs to be refined." It's as if they were developed in a isolation chamber. For every game like Carthage that turns out fantastically, there are a half dozen games with easily fixed issues and errors that the designer was "too close" to see.
Read More...