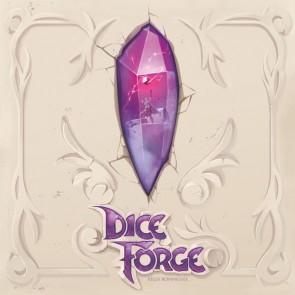 The house hums with the quiet comfort of visitors. In the front room, the low coffee table is ceremonially cleared of cider cans and chocolate. Curious faces crowd the doorway. Under all the scrutiny, I begin to get a little nervous. The Dice Forge box I'm unboxing contains a sleeve which contains a tray which contains dozens of carefully-sorted plastic dice faces. Will the elastic holding it keep all the faces in their places as I've jiggled and joggled the box in transit?

They slide out, as neat and contended as eggs in a carton. And, pretending I was never worried at all, I finish laying out the game and hand a pair of curious customisable dice to each player. Looking at them, it feels like I'm handing out bits of Lego. And right away, everyone tries to pull a face off. I explain that you can't: you need to use the new face as a lever to eject its sorry predecessor.

Before we can play, I have some setup to do. There is grumbling at the delay. I don't tell them about the time I'd already spent putting the right starter faces on the dice and sorting the other faces into their tray, grouped by cost. I sort out the two decks of cards - a starter set and an advanced one - and put each group of cards into their appointed slot. As I do I explain that some cards give you special powers, others shiny new dice faces and yet others just victory points.

There might have been grumbling, but the wait has whetted appetites. You can sense it around the table, a slight thrum of anticipation to get those new dice tumbling. On a player's turn, everyone rolls but only that player gets to buy cards or faces. This feels unfamiliar at first and requires reminders. And, since most of the starting faces are one gold, that's what we start to accumulate.

Gold lets you buy new dice faces. Some have higher gold values or give you victory points. Others generate Sun Shards or Moon Shards, additional currencies that you can spend on cards. I'm going last and by the end of the first round, I'm already working over a strategic problem. You're only allowed to store a limited number of each resource (one of the cards lets you store more). So, since I've rolled on everyone else's turn but not been able to spend, I'm already pushing my limit on gold.

With that in mind, I decide to buy a face that gives me Sun Shards.

The rules are a classic setup of competing priorities and ways to score points on a personal player board. But the simple web of resources and the cool dice pulls everyone into the group game, not their own. We're all watching those Lego dice bounce, ooh-ing and aah-ing as the come to rest. Gloating or commiserating when someone gets a high roll for something they're already at the limit of. Sucking teeth to see if a player's going to snatch a card we want before it's our turn.

And within a mere couple of turns, approaches to Dice Forge have diversified wildly. The player on my right has bought a card that turns gold into points and so is now building up their gold faces. One of the other players went heavy on Suns, so another went heavy on Moons so as not to compete. Me, I've bought a card which gives me a special dice face that triples what's on the other dice. So I'm buying victory point faces and hoping.

Having two dice gives you some interesting probabilities to play with. My multiplier face is one example. The player collecting Moons has got one dice loaded with Moon faces. But on the other she's put lots of wildcards, ensuring she gets Moons with some flexibility to shape her turn.

Dice Forge games last a fixed number of turns. Toward the end, the tension begins to wind. Everyone's after the big, high scoring cards but there's a limited number of each. It's a race, depending on turn order and dice luck. Like most races, it's edge of the seat stuff. But at the death, we all know that buying an edge by building a good engine is every bit as important as the other factors.

Toting up points is time-consuming, but adding up has rarely felt so exciting. In the end, the guy with the gold takes the trophy. My engine got some good rolls and some big payoffs, but it wasn't reliable enough. Maybe if I went all-in from the start, saving one die for all the big rewards? Maybe. Or maybe this is a game where you have to work with what you're given to some extent.

Let's find out. There's easily time for another game.

First, we have to reset all the cards, which is a pain. Then we have to reset all the dice, which is a bigger pain. A frenzy of levering begins, players aiming their flying faces at others on purpose. Amid the delight, there is a sudden disaster: a light push has broken the holding corner piece off a dice. Superglue is found and lovingly applied and then we wait. It's as tense as the game itself but, on testing, it seems to hold. We breathe out, and carry on.

It's a second game, so we're all keen to put into practice what we learned in the first game. But as things begin to unfold it becomes apparent that no-one is going for the cards that stymie other people's play. None of them seems cruel enough to be worth the effort. Instead, it's back to building our own little dice engines, cheering and cursing with every swing of fate.

This time what wins is a spread of Moons and Suns aiming to gobble up the high-scoring cards faster than anyone else. But already, eyes are drifting toward that advanced stack of cards. It might be that even with all the faces and the cards and the randomness, there's not quite enough in Dice Forge to sustain it into the long term. Whatever the best way to play, and however long it lasts, it's clear we're going to have a lot of fun finding out.

March 17, 2019
Rating
3.0
Dice Forge
Ease of rules and thrills of dice make this a fast and fun alternative to dreary engine builders. But it lacks in variety and moving parts.
MT
Matt Thrower #1 Reviewer 286 reviews

Jackwraith replied the topic: #293963 18 Mar 2019 08:08
Hrm. I never would have looked at this game if you hadn't reviewed it. I tend to dismiss most dice games as simplistic, despite the extremely technical knowledge needed to be successful at classic dice games like craps. However, you've made it sound quite interesting and, as I look over at BGG, it has ridiculously high ratings for what, again, sounds like a thin game. You've even set the table for those thoughts by speaking about how you feel it lacks staying power.

Interestingly, it seems like the designers agreed with you, given that the expansion released this year carries this in its description: "... thirty exploit cards as well as new die faces, new boards, and an expansion to the sanctuary box are added to offer players new challenges, greater interaction, and more replayability." Most expansions are pitched as "here's even greater stuff to do with our already great game" or are obviously presented as "here's stuff that was part of the original design that we backed out for a number of reasons." (see: Riverfolk expansion for Root, for example.) I wonder if the concepts in Rebellion were added after they knew they had a hit, but that it wouldn't last, or if they knew it wouldn't last to begin with? But that's the type of game that I'd never expect to see with as high a ranking as Dice Forge has at BGG (although it's become harder to read any distinct messages out of the ranking over there as the years have passed.)
Read More...