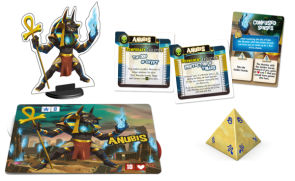 Game Name
King of Tokyo and King of New York: Monster Pack Anubis
Publisher
IELLO
There Will Be Games

Time to get Godlike

Either King of Tokyo or King of New York makes it to the table at my house around once a week. One of my initial forays into “Hobby Gaming,” it serves as an appetizer for more complex offerings at the beginning of the night, a quick filler during the middle of a gaming session or as a cool down session after frying our brains all night. So, new character expansions have been greeted with the same anticipation as unlocking hidden characters in the arcade fighting games of old...A new challenger appears!

The core of the Anubis character expansion is, of course, Anubis himself. The Jackal-headed god of the dead strikes a good presence on the table. The standee and scoring board are the same excellent quality as those found in the base game. The scoring wheels seem a bit “tighter” than the King Kong release, which is a good thing (Small bumps and bangs don't dislodge them from their current position).

The thing that sets Anubis apart from being “just” an additional character is the Power-up cards. If you are using the Power-up Expansions for KOT/KONY (which you should be), the character powers are particularly exciting. The sets for KOT and KONY contain virtually identical powers for Anubis and are an equal mixture of temporary evolutions and permanent ones (four of each in the 8 card evolution deck).

Normally, I'm more of a fan of the permanent evolutions than the temporary ones but Anubis has some fantastic one-time “BAM!” effects that I really relished. Take Weighing of the Heart: The Monster whose turn it is woulds himself instead of wounding other monsters. I can personally attest to the joy of playing this card when a monster hits that “Yahtzee” of six Paws while presiding over Tokyo. Equally “evil” is the God of the Dead temporary evolution that lets you gain half of a players stars when they are eliminated. (I will say this one was the subject of debate when played against other cards such as, my wife's favorite, Cyberkitty's “9 Lives” which allows the defeated monster to return to play). Anubis' permanent evolutions are nothing to sneeze at either. Mummy's Servant lets you roll and keep an extra die before you initial roll and The Day of the Jackal wounds all other monsters if you roll exactly one single paw on your turn. It's more than just the “newness” of the character that hads lead all of our recent games to include Anubis, he is just a exciting character to play.

Iello has never gone minimalist with it character expansions for KOT/KONY. The Cthulhu expansion included the addition of cultist (rewarded in KOT for rolling 4 of any dice face) that could be turned in for your choice of Energy/Health/Reroll. I literally have not played a game of either “King of” game without it since it's release. King Kong included Tokyo Tower/Empire State Building that was triggered by rolling four “1's” in KOT. While King Kong regularly makes an appearance in my games, the towers almost never do. Anubis adds the Die of Fate and Curse cards, which fall directly between the two in making it to the table. We won't be using it in every game but it works great for dropping into the mix when you want a twist of fate.

The die of fate is (of course) a pyramid shaped four-sided dice with iconography from Egyptian folklore. It is rolled along with the other dice on your turn and resolved just before the other dice at the end of your turn. Well, it's supposed to be rolled along with the other dice. Rolling those six chunky, awesome six-sided dice (or seven or eight dice Go, Go Extra Head) have the great tactile feel as you shake them in your hands but the over-sized Die of Fate just throws it all “off.” It simply doesn't fit comfortably in your hands with the rest of the dice and we usually ended up rolling it separately. This isn't an optimal solution as it adds a whole three separate rolls to each turn but, damn it, it just doesn't feel right/comfortable rolling them all together.

When playing with the Die of Fate “expansion,” new, ever-changing rules are added almost every turn. Sometimes, you are not allowed to yield Tokyo. Other rules restrict players who are not holding the golden scarab (a card that only one player can hold) from gaining Hearts/Energy/Stars. This is all done with a deck of curse cards, with a new curse replacing an old curse if a “Eye of Horus” icon is rolled on the four-sided dice. The other sides activate either a positive, if an Ankh appears, usually breaking the newly added rule or an even more punishing negative if a snake comes up. The final dice side is the water icon which means the current curse remains in effect. Does it sound like anarchy? Because it really can be anarchy. Just when you adjust your strategy, another completely different curse comes into play and you have to change tactics on the fly. This virtually defines the Curse deck as something you play with when you want to shake things up, adding another level of randomness to overcome with super-sized monsters.

Everything in the Anubis pack is modular. You can add Anubis without using the Curse deck or you can add the curse deck without using Anubis. I like the “next level” irregularity and complexity that the Curse deck adds. But, I stated earlier, I won't be using it every game but it works great to knock the rust off the ol' Mechadragon for anyone who feels they have seen everything the “Kings” have to offer.

Jackwraith replied the topic: #295290 10 Apr 2019 15:01
Coolness. I'm a sucker for most Egyptian-themed things. My question, having only played King of New York once, is: Is there any significant difference between KoNY and King of Tokyo? Is it just a setting? You say "virtually identical" in the power sets between the two for Anubis, but then seem to use the two locations interchangeably in later descriptions.

WadeMonnig replied the topic: #295291 10 Apr 2019 15:40
I have a King of New York review pending. I've owned it forever but it's been making more and more appearances on my table of late. In the case of anubis, none of his powers in KONY are directly tied to the specific changes made in KONY, whereas Mantis's power ups (default KONY character) had one's that directly interact with the destruction (of buildings and military) aspect. Basically, the Anubis power up cards just swap Manhattan for Tokyo in some of the wording, which is why I didn't directly address the differences in playing him in both games.
Read More...