Duhr: The Lesser Houses in Review 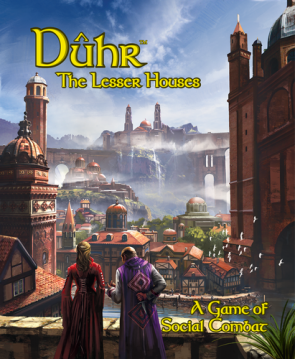 The first three published games from Jim Felli were all true originals. Oh sure, there was DNA from previous designs. But whether he was redefining the adventure game with Shadows of Malice or designing perhaps the heaviest take-that game ever in Zimby Mojo, Felli has never been afraid to leave his mark on a genre. A couple years back he did it once more with Bemused, a strange combination of deal-making and social deduction that was his most refined game yet. All three games were as different from each other as they were from everything else. Now we have Duhr: The Lesser Houses, and for the first time Felli is repeating himself a little.

In Duhr: The Lesser Houses the players are different minor noble houses in the titular city. They will spend the whole game casting suspicion on each other in strategic ways, through the use of cards. If enough of these suspicion cards stick to you, your house becomes Disfavored, and your options will be slightly constrained. If enough of those cards are more damaging scandals, your house becomes outright vilified, and you will be forced to drag down everyone else to have a shot at winning. There are also agendas that will give the houses bonus points based on the final results of the game, and agents that serve in other houses to give the players some more options.

For those who are familiar with Bemused, you will notice that in broad strokes this is basically the same game. There are some key differences though, chief of which is the setting. Bemused had one of the most unique settings I’ve ever seen in a game, with the players as muses trying to drive the artists of other muses to insanity or even death. It wins points for originality, but I think that Duhr: The Lesser Houses benefits from its more pedestrian locale. Frankly, this new version just clicks better. Its mechanics make perfect sense in the world of medieval backbiting, and while the players could read the background printed in the rulebook, they won’t need to for the game to make sense thematically. This represents a first in Felli’s games, which are all set in bizarre settings with weird names that require a lot of table-setting before the game itself can be explained. It’s nice to be able to explain this stuff without having to explain what a gemina is, for example.

The other changes are generally to the game’s benefit. Deal-making has the biggest boost. In Duhr: The Lesser Houses the players are actively encouraged to swap cards with each other, something not made explicit in Bemused. (That I could find anyway.) This card-swapping is much easier to justify thematically in Duhr: The Lesser Houses, where the cards represent suspicion and scandal rather than dread and despair. Not only that, but in Bemused having enough bad cards killed your artists, an obviously permanent condition. But the equivalent status of villainy in Duhr: The Lesser Houses can be reversed, giving the player way more flexibility. That makes the game feel more winnable whatever situation the player finds themselves in.

The biggest change is the addition of Masterstrokes. These are special actions players can take by using two matching suspicion cards. It’s basically a kind of bomb, a way to cancel someone else’s action or remove a specific card from play. They can even be played out of turn when they negate another player’s action. Think of it like the Cosmic Zap in Cosmic Encounter. These are great. In one swoop they solve a lot of issues present in Bemused. First of all, it’s easier to get any matching pair of cards rather than a specific color from the deck. (The addition of increased card-swapping helps too.) It also gives a player options when they don’t have the color they need to affect the right players, or to help themselves in any meaningful way. There are also now more ways to threaten and cut bargains with your opponents. Lastly, they just shake up the status quo. For as weird and wild as Bemused could be, it often found itself in something of a deterministic state where the players could not really prevent something inevitable. Masterstrokes make the whole thing feel much more dynamic.

I hope that Duhr: The Lesser Houses has found an audience outside of Felli’s cult following, because I think my greatest impediment to enjoying this game has been its similarity to Bemused. I actually think Duhr: The Lesser Houses is the stronger, more elemental design, but it is close enough to Bemused that parsing out how similar mechanics worked in different games was surprisingly challenging. This is compounded by the fact that Felli is not one to shy away from complexity, even in a game that runs about 30 minutes on average.

And after four games from Felli, I am ready for a game where all of this complexity is at my fingertips, rather than buried in the rulebook. Frankly his games are hard to actually play. All four of his designs are in dire need of player aids, and enough of them for each player to have their own. Some have been provided after the fact in past designs, and there are some here as well, though still not enough for a table of six players. (And you do want six players, believe me.) These would reduce the need to look things up in the rulebook, which has always been a little tricky in his games. This feels like a minor point, but I want to play his stuff as often as possible, and they reveal their mysteries slower than they need to. He has always designed complex games, and that’s fine, but he has yet to nail down how to convey that complexity in a way that makes it as accessible as possible, either in the rules or graphic design. To be fair, Duhr: The Lesser Houses is easily the best he has done with this difficult task so far, but it’s not quite where it needs to be yet.

March 24, 2019
Rating
4.5
Duhr: The Lesser Houses
For the first time, designer Jim Felli returns to the well with Duhr. The results will feel a little familiar to fans, but it's still a great game of skullduggery and deception.
SI
san il defanso Top 50 Reviewer 55 reviews

Vysetron replied the topic: #294393 25 Mar 2019 08:11
I've only managed to get Duhr played twice. There's glimmers of brilliance to it but I need to play it more to really suss out what those are. Felli's designs tend to be very nuanced and require study. Maybe this'll be one for the work group.

hotseatgames replied the topic: #294397 25 Mar 2019 08:52
After Christmas I had a big game day, and we had a 6 player game of this. It went great and was universally liked. I must add that one of the reasons that it went so well was that one of the 6 players was Jim Felli.

Jim Felli is the best Jim Felli game player aid I could ever ask for.

Gary Sax replied the topic: #294490 25 Mar 2019 18:36
That last post of yours got deleted for some reason and it had nothing to do with any intentional moderation. Might have just been an accident. Sorry about that Anjou.

san il defanso replied the topic: #294492 25 Mar 2019 18:37
I almost commented on it, because it feels like the format of Made Up Word: The Stuff After The Colon is overused. That said, it gets to be a cheap shot easily. And besides there is evidently more design work being done in the city of Duhr, in which case the title makes more sense.

Gary Sax replied the topic: #294493 25 Mar 2019 18:39
Felli is interesting (hi Jim!) because his stuff tends to have DEEP lore behind it even when it feels like only window dressing in the game. Shadows of Malice is like that---Jim has a super strong idea about the setting but to my mind one of the biggest strengths of the game is its ability to make you feel like you are in a very flavorful but extremely fluid and non-specific fantasy world.

xthexlo replied the topic: #294507 25 Mar 2019 21:40
It's funny about names. For me, Dûhr was a name I made up for a city state in a novel I wrote: an ancient and imposing city state that brooded along the River Fwaer at the foot of the Mountains Icetop. It's part of a larger mythos that bled into my D&D campaigns. I've recently been informed that Duhr, in Arabic, is the Muslim prayer time in the afternoon.

Gary Sax wrote: Felli is interesting... because his stuff tends to have DEEP lore behind it even when it feels like only window dressing in the game.