Kings of Israel Board Game Review 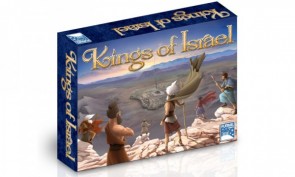 A Pandemic of Sin.

Funhill games recently released the 2nd Printing of Kings of Israel (which is the version I am reviewing). It is a co-operative game that pits the players, representing Prophets in ancient Israel, against of flood of sin that is attempting to spread over the landscape. As you might have been able to tell from even this brief explanation, those familiar with the Pandemic/Forbidden co-op formula are immediately going to recognize it in Kings of Israel. In the time between the first and second printing of KOI, there have been a flood of alternate takes on the Pandemic formula, so it may have lost some of it's “novelty” in the intervening years.

The game takes place during the reign of the Kings of Israel starting with Saul and proceeding to Hoshea (So, by the end of the game, the prophets are going to be as old as Methuselah). The Goal is to build a set number of altars (based on the number of players) before Israel is destroyed at the end of Hoshea's reign. The Prophets must also keep Sin from overwhelming the Israelites. Sin is represented by black cubes, False Idols (which appear when you have more than 3 sin tokens on a single location) are Gold Calf tokens. Some of the included tokens were a bit suspect in quality, with less than square cubes/altars and Prophets that can distinctly wobble, but nothing that interfered with proper gameplay.

Kings of Israel uses a number of neat ideas to overcome “The game is determined by the pre-game shuffle of the cards” that plagues many co-ops. The most thematic uses the Prophet aspect where you can foretell the coming of a disaster. When you draw a Foretold event, you place it face-up in the sin & punishment deck underneath the number of cards equal to the number of players. Now that card is literally staring you in the face, and you know that in “x” number of turns, it will come to pass. You also draw blessing cards during the (extremely rare) reign of good kings. A mix of one-time positive events and ongoing powers, they let you mitigate ill-timed Sin & Punishment cards. The included biblical touchstones can make the Sin & Punishment deck pop with real wrath-of-god type stuff: Fire and Brimstone coming down from the skies, rivers and seas boiling, dogs and cats living together (Editor Note: Thank you Doctor Venkman but that last one doesn't make an appearance). The addition of resource cards that are needed to purchase actions and Sin coming from other countries manifesting as a two pronged “attack” (Sin splits the D and hits two cities!) are just a couple of the things that help differentiate this release from it's cataclysm roots.

Kings of Israel also makes accommodations for the common complaint of “This game is too hard/too easy.” When playing in Easy Mode, you are allowed to play all cards face-up for an open information game and draw a Blessing card each time you perform a “Sacrifice.”(Which requires an Altar, Cattle and Grain...I think you can sort out what happens). Playing in Expert Mode adds an AI driven “False Prophet” who will undermine your best efforts to stem the tide of evil. (Unrelated Side Note: The false prophet is represented by the black token...which is my preferred color in every game. I have therefore swapped the false prophet for that shady looking green token and declared my black piece as Chuck D, Prophet of Rage) The difficulty also scales up so that adding more players doesn't necessarily make it significantly easier, with shorter reigning kings causing additional Sin & Punishment cards to come into play in three and four player games. You will also find a campaign mode that leads you though the difficulty settings of the game making each subsequent play a tad bit more challenging.

The game can still suffer from some of the “classic” co-operative pitfalls: Alpha-Gaming (a.k.a. Quarterbacking), The "Whack-a-Mole" aspect of stopping outbreaks of Sin and bad, bad luck that is simply impossible to overcome, no matter how far off you and your fellow Prophets can see it coming.

When a game has a theme or intellectual property attached to it that you are a “fan” of, it is easy to ignore the (ahem) sins it commits. The well-worn co-op path that Kings of Israel takes isn't a revolutionary one. But, if you are specifically looking for a board game based on the Old Testament, Kings of Israel rises to the top. It is that rare good, possibly great (depending on if you have played other co-operatives of this sort), biblically-themed board game experience.

March 26, 2019
Rating
3.0
Kings of Israel
An Old Testament take on a classic co-operative formula. Those looking for a biblical-themed board game will find a exceptional experience but those with intimate familiarity with the Pandemic driven mechanics may find it a bit pedestrian.
W
WadeMonnig Top 10 Reviewer 195 reviews

Legomancer replied the topic: #294948 04 Apr 2019 08:08
This sounds like a really nifty and interesting take on Pandemic. As you say, there are now a lot of Pandemic variants, but honestly that's more of an argument for one more, since it's hitting an area that not only is not currently covered but is almost never covered. Similar to Carcassone: Ark of the Covenant, which was also a very good Carc variant.

Colorcrayons replied the topic: #294985 04 Apr 2019 13:37
The very cynical side of me thinks I could retheme any decent boardgame to cash in on (from my own experience at least) christians buying media that validate and reinforce their own perspective.

We see this mainly in the book, music, and movie industry where some media of questionable quality rises to the top of that genre simply because of the religious subject matter. Boardgames already suffer from this, and as Wade noted, nearly always have a poor showing.

Who knows, maybe a religious theme will finally give Dominion a decent and plausible thematic home.

Outside of my cynicism, based on your review, I bet I could play this as a non-sectarion and enjoy the game with the theme. It seems almost like a historical euro that happens to have a smidgeon of religion.