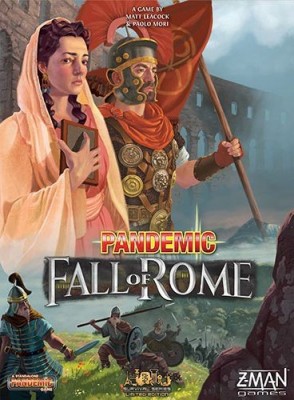 Game Name
Pandemic Fall of Rome
Publisher
Z-Man Games
Designer
Matt Leacock
There Will Be Games
Thousands of gamers can't be wrong about Pandemic, right? But I tried the original with my wife and found it flat. And I tried Pandemic: Reign of Cthulhu with my kids and found it lacked atmosphere. And I tried Pandemic: Legacy with my gaming cronies and we ached to fight each other instead of diseases. Yet here I am, looking at Pandemic: Fall of Rome, and wondering if it's fourth time lucky. Setting it up offers hope. There are dice, and neat wooden Legionnaires to throw them in combat. The event cards and role names are Latin. In truth I'm here because someone I respect - Mike Siggins, the editor of early fanzine Sumo - described it as being Pandemic for wargamers. That recommendation from that name was enough to earn the series another go.

Annoyed at myself, I pack up the board. But an unfamiliar feeling throbs in my gut. It takes me a while to realise that it's not indigestion but interest. The desire to try again, with the rules done right. That doesn't feel like any Pandemic I've played before.

So after I've cleared away the dishes, I try again at the comfort of the dining table. I'm pleased to see that there's an official solo variant in the rules, instead of just playing multiple roles yourself. You have one hand of cards and a "sideboard" to swap around with. It's neater and easier than pretending to be several people.

I've got one role that builds forts, a military leader who reduces casualties in combat and a barbarian queen. In Pandemic: Fall of Rome the cubes are invading barbarians, not germs. Rather than spawning wholly at random, they move along predefined migration routes, which all lead to Rome.

It's these that sparked my interest in trying it again. Previous versions of Pandemic can feel like you're on a loss before you've even drawn a card, just depending on how the deck works out. Here you have more information and thus control. Plus, the cubes rushing along them give the thing a feeling of vitality, of living, breathing history that's absent in its sterile cousins.

Hence the barbarian queen. All the roles can move legions around the board to battle the barbarian threat with dice. But the queen's special power is that she can also move barbarian cubes. It's useful but, as it turns out, not as useful as the fort builder. I can only recruit new legions at forts so they're essential to the war effort. But to build one you have to discard a card matching the city where you want to build. The fort builder can plonk them down anywhere.

This gives me a plan. Build three forts, one in Rome and one each on the Eastern and Western halves of the map so I can raise troops where needed. And it turns out to be a good plan. Very soon I pull a "revolt" card from the deck, which adds three barbarians to Carnutum where there is already one. That would lead to the city getting sacked and more barbarians spreading. But with my wealth of legions, I have one stationed there to soak up any incoming Ostrogoths. Crisis averted.

You can get tribes to ally with Rome by playing a suite of cards matching their colour. Soon I've hit my hand limit of seven with three green and four black cards, both one short of allying the matching tribes. I draw green first and then realise in my military adventures, I've wiped all the Huns off the map. Without a green Hun cube to treat with, I can't ally. So I'm stuck. Worse, the Ostrogoths are adjacent to Rome and some disastrous dice have left me with little to defend it.

It's down to the card deck as to whether the foes reach the imperial city, and I get a mixed bag. No new Huns to ally with, but no new Ostrogoths to batter at the gates of Rome. With a turn's breathing space I can grab some more legions and swoop down to purge the Ostrogoth blight from Italy.

Next turn I do get some Huns, so I send an emissary to ally with them. Soon after, the Ostrogoths and then the Saxons fall to my diplomats. When you ally a tribe, you can recruit them as legions, so my board is overflowing with troops. The deck, however, is dropping down putting a timer on my efforts to ally the remaining two tribes. Instead, I opt to use my military might to wipe them out. Either is an effective route to victory.

As it turns out, I don't need my legion of legions. The deck also contains event cards and I have two helpful examples. One lets me purge some cubes of a single colour from the map. The other allows me to move some legions between any two cities and do battle. Between them, I destroy all the remaining Visigoth and Vandal cubes on the map for a win.

Maybe the game isn't so hard after all. I take a look through the remaining cards and find four out of the six revolt cards were in the second half of the deck. So card order has come to my rescue, it seems. But it's how the game feels that counts more than the mechanics. If you're not drawn in, all the clever rules in the world won't stop you finding excuses to hate on the rules.

But I don't want excuses. I want another game. It sets, set up in the corner of the living room, for a couple of days until I find the time. Settling down into feels like sliding into a comfortable groove, but one with an uncertain destination. This time I don't get the fort builder and all three of my start cities are in the bottom right of the map. So right away I start haemorrhaging cards to sail some troops up north and build a fort down south.

Dice rolls are less kind, burning through my legions like kindling. And having had to burn so many cards to stabilise my starting position, I'm struggling to collect the colours needed to strike alliances. Then I draw a barbarian invasion in a city where I'd missed a cluster of black cubes, hidden in the shadows. Black splurges onto the board like an infection. Suddenly, this groove isn't so comfortable anymore.

The lack of legions becomes critical. Without them, I can't stem the inexorable advance of barbarians. In desperation, I build more forts but as the game advances, each allows you to recruit fewer troops. Instead, having managed to ally two tribes, I leverage a rule that lets you recruit their cubes. Suddenly, I remember this is exactly how the empire fell: starved of manpower, the later emperors barbarized the army. Pandemic: Fall of Rome might not be a wargame but there's more than a musty whiff of history about it.

So history marches toward its inevitable conclusion: Rome falls when my draw deck runs out. There's plenty of challenge here after all and, again, it's down to the cards. Yet as I pack the pieces away, I reflect on why it works where others haven't. It's not proper co-operation: I almost don't want to try this with friends, fearful that quarterbacking will ruin the fragile magic. The dice help, a sense that fate is immediate rather than the shuffled predestiny of the deck, as do the predictable migrations. Mostly, though, it's the painted lure of theme: as with so many games before it drew me in, and it's keeping me here. That paint sure is lovely.
Tweet

April 01, 2019
Rating
3.0
Pandemic: Fall of Rome
Dice, predictable cube movement and, most of all, theme, make this a superior member of the Pandemic family, but it's as open as ever to abuse by bossy players.
MT
Matt Thrower #1 Reviewer 286 reviews

It's piqued my interest for reasons which you touch upon.

The "quarterbacking", "whack-a-mole" co-op in our house is still Forbidden Desert, and every now and then I entertain the idea of getting another one, or even a replacement. This one has come closest, perhaps, but your last paragraph reminds me that I don't really need to (sometimes I need reminding of this).

Matt Thrower wrote: Care and attention have never been my strong pints.

Ah_Pook replied the topic: #294826 01 Apr 2019 11:28
Pandemic was the game that got my wife and I into gaming, and I still quite enjoy it. But fall of rome is easily my favorite version of it. Every change is smart and adds fun, interesting stuff to the game. The dice make the entire thing less solvable. It's a great iteration.

Jackwraith replied the topic: #294847 01 Apr 2019 20:05
Hm. I was really intrigued by this when I saw it come out, because I tend to love all things Roman history and the changes that everyone is talking about did sound like they'd make it more than just Pandemic. Then I played a game.

It's still Pandemic. There's a lot of chrome added and the historical aspects are certainly more interesting than generic modern disease problem, but it's still Pandemic, which means it still feels like a game I've played dozens of times and stopped playing because I was bored. Maybe I should give it another try, but I was distinctly underwhelmed.

Jackwraith wrote: It's still Pandemic. There's a lot of chrome added and the historical aspects are certainly more interesting than generic modern disease problem, but it's still Pandemic, which means it still feels like a game I've played dozens of times and stopped playing because I was bored.

Very good point. I've only flirted with other versions of Pandemic - 2-3 plays - so I didn't find this too much of the same medicine. But I can totally appreciate how you would if you had: the core systems are the same.
Read More...