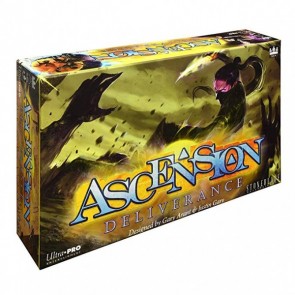 Everyone loves trilogies. Lord of Rings. Star Wars. Fifty Shades of Grey. You know, the classics. Deliverance is the third in the Insight trilogy of Ascension games, giving you something new, something borrowed, and something Pasythea. How does Insight play out in this version? Let’s start with the latter.

Pasythea in her four-armed glory is prominently featured not only on the background of the superfluous game board, but also on a special card with its own designated area. Costing a whopping16 Insight, this fancy lady can be purchased for 4 cheaper for each of her four weapon constructs you own. While going for big, high-cost cards is always appealing in Ascension, the fact that Pasythea hangs out on the board all by her lonesome seems a bit odd. She doesn’t swing any games one way or another and it would have been nice to have had another one or two high-cost Heroes to buy either after or in lieu of Pasythea. As it stands, all that Insight you were saving to get her may now feel like a waste. But then again, maybe not.

Phantasm is a new ability introduced on some of the Hero cards in the center row. Spending Insight, you can play the card from the row then banishing it afterward. This flexibility can be really welcomed on turns where you need to eke out a combo or just one more attack. For those of you who have played Shards of Infinity, this ability is nearly identical to the Quick Play option that Mercenaries provide. (This should come as no surprise given that the games share designers.) Because Deliverance gives you a Dreamseeker card in your starting deck (gain 1 Insight and draw a card), you’re encouraged to freely spend that Insight instead of hoard it. Though you may not see Phantasm cards come up in the center row as often as you’d like, you can always use that unspent Insight to transform cards.

We’ve seen transform in several previous Ascension sets and, disappointingly, it’s not integrated into Deliverance as much as those. Though there are four Mechana Constructs to transform, there is only one Lifebound, Enlighted, and Void hero. Like the Phantasm cards, if you don’t see them pop up (or have the Insight to make them transform), it may feel like this aspect of the game is entirely missing. I honestly forgot they were even in this set until I was writing up this review. That should tell you something.

Finally, the brand new, never-before-seen parts of Deliverance: Dreambind. With that plethora of Insight sitting in front of you, one other way to spend it is on defeated Monsters. For a nominal fee, you can Dreambind a Monster, putting it into your deck to be played like any other normal card. The reward you gained from defeating it is the same reward you get each time you play it. Coupled with Phantasm, this is probably the most exciting part of Deliverance, adding more options on your turn and ways to build your deck. Beware though: some of the Monsters do attack other players. While we’ve seen defeating a Monster cause other players to discard cards, destroy constructs, or sometimes even take points away, adding some of these nasties into your decks means you will be attacking other players more than is typical for a game of Ascension. I’m a huge fan of the PvP in Shards of Infinity, but I prefer my games of Ascension to be more multiplayer solitaire. However, you can always choose to just take the reward once instead of Dreambinding and not be that jerk who keeps stealing others’ Insights every few deck cycles. Up to you.

One last thing: Plunder. A few cards have a new effect that triggers if you both acquire a card and defeat a Monster from the center row on one turn. I enjoy striving for these bonuses. Like Unite in other sets, trying to build your deck around making these effects trigger can be a satisfying mini-goal during the game.

Taken together, all these pieces of Deliverance provide another solid, though somewhat forgettable, entry into the Ascension family. There is no one thing that really stands out among Deliverance’s parts. Everything works and I wouldn’t mind playing this set any time, but it feels like a long time since we’ve seen something truly novel coming out of the latest designs. On the other hand, we’ll see if I stand by that statement once Ascension: Skulls & Sails comes out.