Wisdom of Solomon Board Game Review 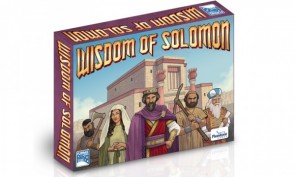 My impressions with Wisdom of Solomon began before I even opened the box. When I saw the box art, I had a flashback to my childhood and a big, hardbound children's version of Bible Stories that my family owned. I wonder if this was conscious decision? It isn't a style that would pop into my head for putting on a board game box but it has a familiarity; a resonance with those latter day tomes. It took only mere moments during the unboxing for Wisdom of Solomon to reinforce this line from Proverbs “How blessed in the man who finds wisdom And the man who gains understanding.” You see, I opened the box and had a knee-jerk reaction to the shortage tiles. “Wow, these shortage tiles are completely miscut! The text is sliced off and they aren't centered and....Oh, wait. These go on the board and cover/replace the text of the board, matching the map.” Understanding gained.

Wisdom of Solomon is a streamlined version of Philip DuBerry's Kingdom of Solomon (which I have not had the pleasure of playing.). It is a worker placement title that trends toward the lighter side of the genre. You are acting as governors for King Solomon, helping him further his kingdom. You begin the game with 10 Victory Points, which acts as both currency and to determine the winner at the end of the game. You place your workers to gain resources, to purchase shop cards, enable trading at the market place and to help complete the great temple. Your victory points ebb and flow as you spend them to buy resources or earn more with your actions.

The game can be swingy and unpredictable....and I kind of like that about it. A number of elements can lead to the swings. For instance, you will often times find shortages of resources. Resources can be gained from the “Supply” by placing workers in various areas of the board that produce one or two of that item. This production can be boosted by a variety of “Shop” cards that you can purchase, letting you take one or two more “extra” resources if you have a Farmer or Miner card. The irony of this is that you can build a network to allow you to reap plenty of wheat only to find that here simply isn't any left in the “Supply.” It is like you built an engine but it is out of fuel. There is also a “Merchant” that allows you to buy and sell goods (and the demand for the supply is fierce), but you also want to time visiting there with judicious use of “Fortune” cards (since you can only play them when visiting either the Merchant or the Trader). Decisions. Decisions.

The end game is triggered by either all of the Temple Tiles being taken (Each has a hidden Victory Point bonus that you achieve at the end of the game) or if a player places their last Custom House. You get to place a Custom House any time you purchase a Shop card from the Foreman and you want to balance them (and the roads connecting them) to maximize the return on each placed worker. Create a network and you can collect resources from adjoining areas...provided you do it before another players have taken that area's available items. It's a mixture of push your luck and optimize your routes.

Another wildcard is the Holy Place Bonuses. These super-powered slots require you to place ALL of your remaining workers on them to activate them. They have a minimum requirement of at least two workers but you can go to them at any time previous to that. The rewards range from take one of each basic resource, eight victory points and a “Wild” Cube, or the “dreaded” Menorah. (The Menorah allows you to take half of an opponents resources if they have more than seven. Maybe this is a thematic lesson in greed?) Some of the swings are more perception than reality. It can appear that a player is severely lagging behind in Victory Points but if they took a distinct Temple strategy (with all the hidden victory points) they can leap to a win when all the temple tiles are revealed. One aspect I wasn't fond of is that when the end game is triggered and the final round continues, it becomes a “Blue Light Special” on resources since they are worth nil in the final scoring. In a four or five player game, this can lead to you having zero things you can do on your final actions that will further your victory points.

As for theme, if helping to build the great temple for King Solomon is what gets it to the table, I guess it has done it's job. However, I'm not sure exactly how good of a governor I am to the King when I'm selfishly placing my last Custom House to trigger the end game end instead of helping to finish the temple. Some of the actions you take, despite being Worker Placement norms, just seem at odds with the religious theme. It also doesn't strike a strong table presence. The board is stark, almost bland in appearance. The split-scoring of the victory point tracker (located at the top and bottom) is an odd choice, especially since you can “lap” the scoring multiple times in a game. I would have preferred a scoring track that traversed the entirety of the board edge or was simply located at either the top or the bottom and not both.

Wisdom of Solomon takes the..err...wise choice of using a proven mechanic to reinforce it's theme. It pushes and pulls the formula to deliver a strong, enjoyable playing experience...even if it did make me use the phrase “dreaded menorah” in this review.