Wu Wei: Journey of the Changing Path Board Game Review 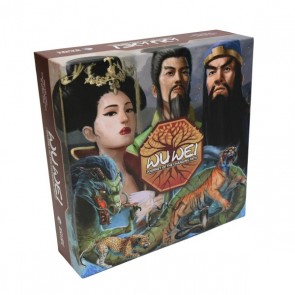 Calm down Bo and Luke, It's pronounced “Wu Way” not “Whooo Whee!”

Would you ever teach someone Checkers to prepare them to play Chess? Welcome to the conundrum that faces Wu Wei. This title takes abstract roots and pushes them into a strategy setting. The goal is simple: Collect each of the five animal cards/martial arts styles and return with your master to the center of the board. The gameplay experience varies wildly, ranging from the mundane and spiraling toward overchoice, depending on what “Level” you choose to play the game.

This title strikes a marvelous presence on the table with production that is simply sensational. And in pure synonym style, that sensation can also be disorientating: Multiple sideboards, separate powers that accumulated from securing Animal Cards, and different rules for student and master pieces. Wu Wei attempts to slowly immerse you into it's depth with three different difficulty levels.

Initiate level is obviously a response to complaints of the game being “too complicated” to teach. It eases you into the mechanics, sets the basic rules in your mind and prepares you for the “real” game. The problem is that it doesn't make for an interesting or challenging experience, especially at two players. Even stepping up to Master level only adds the most basic of demands on your brain. Wu Wei is teaching you a less than exciting game of Checkers hoping you stick around to learn how to play Chess. The real game here is the Emperor Level, but be aware it requires at least three players (one player controlling the Emperor) and preferably more...and therein lies the rub. Wu Wei has a constantly changing board state that can literally morph during each players turn. It's like trying to prepare your moves in chess without knowing if you will be forbidden from moving onto the white or black squares during your next turn. That is an over simplification but the struggle is real. Every player's turn has the chance for Analysis Paralysis, which can be trying in a two player game like Chess but is almost insufferable in a six player game. It is a Catch 22 situation in that you want additional players to add strategy and depth but the more players you add, the more it grinds the pace. In short, if one of your gaming buddies is known as “A.P. Tim,” you might want to hold this one back on game night.

While the goal for the players never changes, being able to quickly move to each of the Temple locations to secure a animal card increases in difficulty with each player added. Each move made can change the dominant Chi color (the currency of the game and you only only allowed to spend the current dominant color), advance a season (which then makes whatever the current season tile is impassable on the board), or even build a wall to make it more difficult for other players to pass through an area . If it isn't possible for you to reach a temple to train, an effective move is to make it difficult or impossible for other players to do the same. It's that slippery path of “Screw you or Better Myself?” If you trap a player so that they can not make a valid move, they lose one of their collected animal cards...but is that a better decision than collecting one for yourself? Apparently, the path to enlightenment involves tossing a few stones on the road of knowledge to trip your fellow initiates.

The Rulebook is a over-sized affair filled with quotes and references to Eastern philosophy and martial arts. While that may work to immerse you into the distinct feel of the title, it can make it a chore when you simply want to use it for a reference to the gameplay. It moves the eyes in too many directions and you end up reading about the Art of War instead of exactly when you can use Alchemy to swap for a different type of Chi.

Like the philosophy it pulls inspiration from, this title requires a balance of the Ying of evolving strategy and the Yang of player execution. Wu Wei ultimately rewards those who choose to take the full Journey of the Changing Path. The underwhelming, basic beginnings eventually lead you to a rewarding terminus. In this case, it truly is about the destination, not the journey.

April 18, 2019
Rating
3.0
Wu Wei: Journey of the Changing Path
Like the philosophy it pulls inspiration from, this title requires a balance of the Ying of evolving strategy and the Yang of player execution. Wu Wei ultimately rewards those who choose to take the full Journey of the Changing Path. The underwhelming, basic beginnings eventually lead you to a rewarding terminus. In this case, it truly is about the destination, not the journey.
W
WadeMonnig Top 10 Reviewer 195 reviews

Do you get a sense of being able to cause a lot of stuff with simple actions?

mc wrote: That sounds like a lot of complexity for a game that is called "do without doing". Especially one that could be AP prone, heh.

Do you get a sense of being able to cause a lot of stuff with simple actions?

The optimal move is always to try to get an animal card. It's when you can't that you end up changing the game state but the more players you have, the less chance those changes will play out the way you hope. That's when AP can kick in. Flipping the ying/ yang token can restrict which piece (master/ initiate) you can move. Changing the dominate chi can make you "cash rich".. if it holds until your next turn. So, yes, simple movement can change the entire landscape... and thinking about the repercussions and if it will truly benefit you.
Read More...