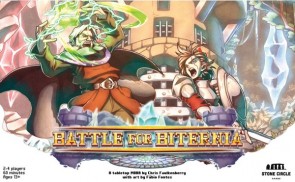 Multiplayer Online Battle Arenas have consumed more of my time and energy than any other video game genre. I played them for over a decade and made some of my best friends in the process. However, their time as the currently hot genre has passed and the surviving games have become massive, bloated, and vile experiences to play. I haven't played one in quite some time, but I still miss them on a mechancial and nostalgic level. Specifically, I miss the interactions, the teamwork, and the heroes, and how it all worked together to create an experience unlike anything else. Due to said nostalgia, I came into Battle for Biternia, with its classic video game looks and promise of MOBA-style gameplay, with a signficant amount of skepticism. I wanted it to succeed, but could it?

Like any competitive MOBA, it all begins with a draft. Trying to put a cohesive team together while counter-picking against your opponents is a deviously difficult puzzle when you only have 4 units to do it with. This is where an experienced player can put the screws to a new one, but the game does what it can to assist in this regard. Cards that concisely summarize the role and skills of each unit are provided to ease the learning curve and provide enough information to make a good choice. It’s a really nice touch and helps make the draft a lot shorter than it would be otherwise.

After a team is drafted, the gameplay of Battle for Biternia is broken into 4 phases: 1) assigning a face-down action card to each hero, 2) taking turns to move, 3) activating heroes, and 4) cleanup. Phases 2 and 3 are done in alternating order but you can activate your heroes in any order you please, allowing you to react to the other player’s maneuvers or strategically pass in order to bait your opponent into a riskier action. It gives each round an excellent arc of creating a plan, attempting to set up, and executing it. Each round is satisfying both on its own and as part of a whole game.

There are some neat mechanical twists. Once the game is underway your deck is never shuffled. The abilities you choose when levelling your heroes immediately enter your hand; cards that are used are placed in a discard pile; and when your deck is emptied you simply turn your discards over to form a new deck. Dead heroes also enter your discard pile and return to the board once you draw their card again. It’s a particularly organic solution to represent cooldown abilities, forcing you to choose between using moves more often but suboptimally or saving them for a perfect situation that may never come and potentially cluttering your hand. This decision cascades because each character’s most recent played card also determines their defense value. You can always take a farm or heal action by discarding your card, but that leaves you vulnerable.

Healing is generally a pretty weak action. It feels like the worst thing you could be doing, but it can be a necessity. The farming action, on the other hand, is an example of positive streamlining. There are no creeps/minions/monsters to last-hit for money in this game. Instead you simply opt to “farm” and produce one gold. Gold functions as experience, allowing you to level your heroes during the cleanup phase at a cost of their current level + 1, which raises their health cap a smidge and earns you a new ability. Heroes can farm anywhere but there’s an extra coin in it for them if they’re willing to push to the middle of the lanes on the map to do so. These areas are very easy to maneuver into and attack so farming there trades safety for value. Bluffing a team fight to force a retreat from your opponent only to hoover up all the extra gold can be a huge swing in your favor.

One important deviation from the MOBA formula is how kills on enemy heroes not only award gold but also directly advance your win condition. The goal of the game is to drop the health of your opponent’s bit from 16 (this game has jokes!) to 0. You can push through their protective towers and attack it directly, but each time you take out an opponent’s piece, their bit takes 3 damage. This means that the game rewards skirmishing and aggression that would normally be too risky in an actual MOBA. Your team composition can be specialized in: grouping up and pushing a lane, defending your base and counter-pushing, scattering around the map to pick your opponent apart, or any combination of the above and they’re all valid strategies. It’s refreshing, fast, and incredibly rewarding to make every fight matter so much.

Nothing that I’ve listed above would matter if the combat wasn’t good, and it is. On the surface it’s as simple as revealing the hero’s assigned card, adding any modifiers, and subtracting the target’s defense value, but of course that’s nowhere close to the end of the possibilities. Each hero has 4 abilities to learn as they level and these offer a tremendous amount of flexibility to what would otherwise be a simple skirmish. Ranged attacks allow combat from adjacent zones, magic damage gets around armor, and there are effects such as interrupting your opponent to teleport away before their strike lands.  Some heroes come with unique status effects such as the Gorgon’s stone tokens that will eventually shatter an enemy regardless of their health, if they take enough. But by far the most impactful ability each hero possesses is their Ultimate, which they can only get at max level (4). These ultimates can lead to some singularly exciting moments.

In one of my earlier games we opted to play with the recommended starting teams. My opponent’s team included the Cleric and the Duelist, mine had the Hunter. At the start of the game the Hunter player gets to select one enemy hero to be their favored enemy. This can never be changed and it offers a lot of benefits to the Hunter for going after them. Later in the game, units were dying on both sides, but mostly mine. I finally took out my opponent’s Duelist as he’d been a thorn in my side all game. My opponent opted to pop her Cleric’s ultimate, which resurrected the Duelist at full health in the middle of the fray and allowed her to assign him a card immediately. She then had him use his ultimate, which is to challenge one of my units to a duel and spirit them away to an off-map thunderdome that cannot be entered or exited through normal means. Two heroes enter, one hero leaves. As you can imagine. the duelist usually wins these fights.

I managed to keep my unfortunate teammate alive just long enough to level my Hunter to max and snag his ultimate, which allowed him to teleport to his favored enemy and stab them in the back. He turned that fight into a 2 on 1 and destroyed his prey, saving his teammate’s life at exactly 1 hp. Was it honorable? Not even a little. Did I turn the game around and win as a result? You bet your bippy I did.

Moments like this and many, many others like it have made Battle for Biternia the best new game I’ve played this year. Faulkenberry understood what made MOBAs fun at their core and boiled it down until he was left with just that essence. This understanding was wholly missing from Rum and Bones, which is the only other attempt at translating MOBAs to tabletop that I’ve played. Where that design was a light dice-chucking skirmish where you had to spend ¼ of your turns shoving an autopiloted conga line of plastic minions, Battle for Biternia gives you nothing but the best cuts and lets you gorge yourself on them. It’s strategic, quick, deep, and fantastic at every player count, particularly in 2 versus 2 teams so you can coordinate schemes with a friend. It captured what I love about the genre while improving on it and I didn’t even think that was possible. If you have any love for MOBAs or just want an innovative skirmish game with a ton of replayability you owe it to yourself to check this thing out.

Disclosures: I received this as a review copy from the publisher and designer. I also played this game once in its infancy at an unpub meetup a few years ago.

hotseatgames replied the topic: #296392 02 May 2019 08:13
This sounds cool, and different enough from Guards of Atlantis mechanically. I love Guards, and it's getting a sequel this year.