Between Two Castles of Mad King Ludwig Board Game Review 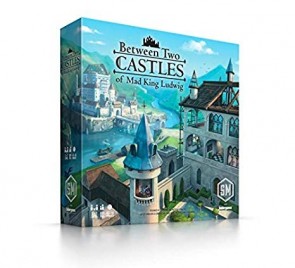 Is “Just as good” not good enough?

The title of Between Two Castles of Mad King Ludwig reminded me of one of those Facebook board game threads titled: “Combine two of your favorite games into a new game.” Which, of course, is almost exactly what this release did. What I don't think they anticipated is consumer confusion. Sure, if you are into “The Hobby” you probably have heard of these games. But standing in the game store, staring at the shelf, the name recognition might lead to confusion. “Hmm... Is this a sequel to Between Two Cities? Or Castles of Mad King Ludwig? I thought that was Palace of Mad King Ludwig? Which was the one that I heard wasn't that great? Hmmm... Maybe that was Castles of Burgundy? Wait, do I need both of the previous games to play this?”

Taking the partnership-driven, tile-drafting of Between Two Cities and adding the construction of grandiose castles from the Mad King, it is exactly the sum of its parts. It uses The Stonemaier Star System and, in this case, if you aren't getting at least one Star per tile placement, you are doing it wrong. With the (hopefully) constant gaining of stars, it's definitely Star Souffle (the Stonemaier version of Point Salad). You'll find a handful of smallish icons on the tiles, all of which indicate how and where the tiles will score. During your first few playthoughs, you'll spend a good portion of your drafting turn sussing out exactly how and where each tile plays..and then another portion sorting out exactly where you are going to play the tile you selected with the one a “partner” selected to play in your shared castle. You see, you will be building one castle with the person to your left and one castle with a person to your right. I thought this might lead to the feeling of Lack of Ownership/Investment in each castle but this never reared it's head: I always felt both castles were “ours.” I also feared how this co-operative competitive game would handle quarterbacking/alpha gaming. Once again my fears were unfounded, with interactions with my co-constructor beginning with “Let's do this...” or “We should try that...” and rarely, if ever, falling into “I want to...” Even when drawing a new player into the fold of experienced players, the fear we were “gamesplaining” or dictating never came to fruition.

The game moves at a brisk pace. You select two tiles from the starting stack, place one of those two tiles in each of the castles you share, and pass the remaining tiles in the stack to the next player. While you are deciding exactly where you want to place your two tiles, verbal interaction with your partners is required and encouraged. Still, this somehow never bogs the game down as everyone is doing the exact same thing at the exact same time. You may only be being “social” with the person directly to your left and right but it is a direct and stimulating interaction that you won't find every game.

While the sprinkling of icons and information on the tiles can be intimidating at first, the included player aids provide great direction to assist you. You'll inevitably have a tile that is placed improperly or scores slightly differently than you expected in your initial plays but never in an overwhelming way. You end up saying “Oh, that makes sense, I'll play that properly next time.” I was a bit concerned that the smallish nature of the icons on the cards would be an issue. However, you never have to read them from “across the table” So you are always looking at them in your hands while drafting or in the collective castle directly next to you. So, it doesn't matter if you are playing a three player game or a seven player game, what tiles that concern you are always within a simple glance.

After two phases of drafting and placing, the game ends and you score up each castle. It's easy to joke that the end game scoring is the third phase of the game but, honestly, if you follow the manual and have every player score the castle to their left, it is done in a couple of minutes. I don't think it is expecting too much for every player to learn how to score the game, especially since the scoring pads virtually walk you through it to make sure you don't skip any potential stars. The twist on determining the overall winner is that you final “score” is the LOWER point total of the two castles you helped construct. From a game mechanic view, I can see why this was the path they took but from a thematic point, it just didn't “feel” right being judged on your second best effort. “Yea, Monticello is fantastic but let's see how many stars Poplar Forest earned.”

One thing that I have really noticed about Stonemaier Games is they treat EVERY release like it is their flagship title. From the quality of the material used on the instruction manuals to the Game Trayz inserts to the smooth gameplay, nothing about this release is “phoned in.” As usual, the Game Trayz inserts aren't simply for storage, you pop these out in the center of the table and you are ready to play in mere minutes. From set-up to clean-up, every step is super smooth.

In this generation of “Is 'X' game a 'Y' Killer?” mentality, and the perceived nature of the battle for shelf space, is “Just as Good as it's predecessor” good enough to earn a title a place in your collection? Between Two Castles of Mad King Ludwig is great at interweaving the aspects from Between Two Cities and The Castles of Mad King Ludwig but it doesn't exceed or “replace” either title. It is a good game that I anticipate seeing plenty of times on my table, but if the core audience for this release are fans of one or both titles, maybe that isn't enough?

Frohike replied the topic: #296352 01 May 2019 01:48
I can't imagine two more tepid icon calculators to combine into an uber-tepid brew. Maybe some Suburbia for good measure? Yikes. Edit: great review, though, and yeah Stonemaier do not mess around with production quality.

Vysetron replied the topic: #296359 01 May 2019 08:29
I tested this one. I like it fine but it definitely doesn't leave a larger impact than either of its parents. Still prefer Cities for its laser focused simplicity.