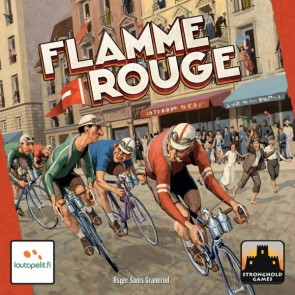 The red flag recieves a green light for excellent racing.

Pretty much everything I know about bicycle racing comes from watching Breaking Away when I was a kid. I learned that 1.) The Italian racers were dicks. 2.) Something about persevering 3.) I'd watch any show with that cool kid from The Bad News Bears in it (Jackie Earle Haley). Still, Flamme Rouge immediately caught my eye when I first saw it. It is a team-based cycling game (you command two riders: A Rouleur and a Sprinteur) where movement is controlled with a rider specific deck. On your first turn, you will shuffle and draw four cards from each deck. You then select and play a card moving the indicated number of spaces and then that card is then depleted and out of your hand for the rest of the race. But the game isn't simply based on the luck of the draw; strategy and planning play an intricate role in what makes the gears of this bicycle race churn.

In order to win, only one member of your team must cross the finish line. This is where you start to think strategically, You can move your Rouleur out front, letting your Sprinteur slipstream behind him, saving his best cards for a final push on the last section of track. But that strategy still hinges on the “Push your Luck” mechanism of the card selection. You pull four cards from either your Rouleur or Sprinteur deck and select one. Let's say you are going with the strategy I mentioned above. So, you select the four cards from your Rouleur. You decide to select a “six” card .Then after you have “locked in” your choice, you pull four cards from the Sprinteur deck. You are hoping to pull a “4” card, which would allow you to slide behind your Rouleur, let HIM pull the exhaustion card (A “2” card that will be added to his dwindling deck) and allow you to slipstream, effectively making the “4” card you played into a “5” card... Except you don't pull a “4” card to play. You instead are stuck with other cards that will either cause you to overtake him or fall too far behind him to draft/slipstream him. Or maybe you do actually get that “4” card but another player slides in behind your Rouleur and you don't end up slipstreaming or, even worse, have to pull an exhaustion card for both cyclists because they are both exposed or leading the pack.

Each race you will be building a track from the included tiles. The recommended first race track is a simple layout of straightaways and turns with more sheep on the tiles than you can shake a Catan box at. It suffices to introduce you to the basics of slipstreaming, avoiding exhaustion, and when to attempt to break out of the pack for a sprint to the finish. It's unfortunately easy to dismiss this game after a single play or two as simply too random. I believe some of this is because it isn't immediately apparent why you came in fourth place instead of first. It can be hard to digest why your eight-year-old niece won when she was simply playing her highest cards every turn, unless you notice that she managed to slipstream more than a few times (planned or not) and, yes, she did get pretty darn lucky on her draw on the final leg of the race.

This is when you should pick a more advanced track and add in the Hills rule. Suddenly everyone sits up a little straighter, leaning in and you can almost hear the gears engaging in everyone's mind. You can't slipstream when you ascend a hill and you can't move more than a “speed” of five. If you start your move in the “red” that indicates a hill or move into a red zone during your move, any card played that is higher than a five turns into a five. Sure, the rule takes a bit of explanation and a few executions before everyone “gets” it but it is by no means an “advanced” rule. Combine ascents with the inevitable descent where any card you play is boosted to a five (as you have the wind at your back and the bugs in your teeth) and now you might find yourself praying to draw an exhaustion card so you can “burn” it out of your deck and it doesn't reappear during a sprint to the finish.

This is not to say that the best laid plans of bikes and men don't often go awry. Sometimes, you are just going to get stuck on that hill, playing three cards just to top it and it just doesn't seem fair. Other times you are just going to get bogged down in the middle of the pack: “None of you seem to understand, I'm not stuck in the pack with you, you are stuck in the pack with me!” (Jackie Earle Haley fans need only apply for that reference). But it is a heck of a lot of fun picturing a winded Sprinteur's foot slipping from the pedal as he prepares to make his move.

If you have already played Flamme Rouge and are just reading this review to see if I agree or disagree with your opinion, this little bit is for you. First: you may notice some of my screens include riders from the expansion, I'll be reviewing that later. We just liked using those particular team colors in our games. Second: you need to be using the Flamme Rouge Companion App. I can not recommend it enough. It turns the game into a Tour de Force (Tour de France?) by making each individual race a stage in an overarching competition. Nothing takes the sting out of a poor performance better than knowing you can make up that time in a next race; maybe even passing up the leading team. Sure, it is unofficial but it is such a great addition, I had to mention it here. You can even print out asymmetrical powers for your racers, if you are looking for even a bit more diversity.

It doesn't matter if you have watched every leg of the Tour de France or your only exposure to bikes is Pee Wee's Big Adventure, Flamme Rouge is accessible fun for two to four players. Even if you the only one keying on slipstreaming or end race card management, everyone will still have a great time... despite your eight-year-old niece occasionally passing you like you have training wheels on.

April 26, 2019
Rating
4.0
Flamme Rouge
It doesn't matter if you have watch every leg of the Tour de France or your only exposure to bikes is Pee Wee's Big Adventure, Flamme Rouge is accessible fun for two to four players. Even if you the only one keying on slip streaming or end race card management, everyone will still have a great time...despite your eight year old niece occasionally passing you like you have training wheels on.
W
WadeMonnig Top 10 Reviewer 195 reviews

Malloc replied the topic: #296761 08 May 2019 08:06
If your playing this game and not asking yourself why you are not playing any other racing game your doing it wrong. This thing sucks.

I think Dr Cody said it best in his BGG review:
“Pounding the pedals was my favorite mode of exercise for 20 years (wind, freedom, murderous cars, etc.), and I often wondered why there weren't more biking board games. Now we know.”

Malloc wrote: If your playing this game and not asking yourself why you are not playing any other racing game your doing it wrong. This thing sucks.

I think Dr Cody said it best in his BGG review:
“Pounding the pedals was my favorite mode of exercise for 20 years (wind, freedom, murderous cars, etc.), and I often wondered why there weren't more biking board games. Now we know.”

But did you try it with the app? I'm kidding!
One person in my main group feels the exact same way about it. They requested we play it with all the expansions a couple of times so that they never have to play it again.
Read More...