Barnes on Games - Empires in America in Review 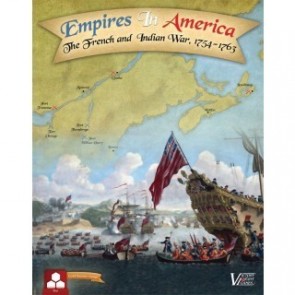 Victory Point Games' venerable States of Siege line has come a long way. The original games in the solitaire series – titles like Soviet Dawn and Arab-Israeli Independence were pretty simplistic, whack-a-mole affairs where you tried to beat back five counters moving along different tracks whether they represented armies, ideologies or whatever. They were card-driven, with historical events driving the action. Typically, various tracks and meters would influence die rolls and other results so you got a decent sense of a historical narrative in a compact package. But those early versions of the system were pretty simplistic and they often felt somewhat repetitive or lacking in giving players enough agency to counteract bad rolls and inopportune card draws.

I liked the early SoS titles, but from Zulus on the Ramparts on through Cruel Necessity they got a lot better. Cruel Necessity in particular is kind of the "Citizen Kane" of the form, a detailed, exciting game that captures a good percentage of the feeling of playing a big GMT-style card-driven wargame without straying too far from the simplicity and brevity of its forbears. But before VPG's designers started evolving the system in earnest, the 2009 release Empires in America was one of the first of the more advanced titles. Designed by Joseph Miranda (who also did Zulus), it opened up a couple of new concepts in the series specifically tied to leadership and command-level strategic decisions. There's a new edition of it now available as part of the "Gold Banner" series, and it's a fine choice for those looking to check out these games.

It's the French and Indian War in all of its glory and with all of its major players. Washington is here along with Wolfe, and you'll play against them as the French under Montcalm and other continental generals. The goal is, of course, to keep the English out of Quebec as they approach from five different areas. Each general is represented on board by a card indicating their battalion strength, a reputation score that can go up and down based on campaign successes and any special abilities. The English automatically assign their leaders to the "lanes" to Quebec and can be sacked, reassigned or completely eliminated. The French play leaders during assaults on forts and while attacking approaching armies, bringing along militia, siege weapons and of course native irregulars all represented by cards.

Process is easy enough. A staged deck of "Historique" cards outlines the events that happen both in America and also in Europe leading up to and throughout the Seven Years' War. At first, you'll draw four of these per turn, some of which become hand cards that you can play to your tableau, increasing your military strength or imparting special actions. English generals also appear in the deck as well as harmful events that hamper your cause. When the Seven Years' War breaks out the tempo increases and you draw six of these cards per turn. The goal is to survive the entire deck, which takes about an hour and some change if you are familiar with the game.

The English move any army counter that has leadership's along their route up to the number of that leader's command, and if they hit a fort (either printed on the board or built by the player) there's an assault. There's an initiative roll, and whoever gets it rolls first- a big advantage. Fives and sixes are hits, whoever comes out either alive or with the least casualties is the winner. If the French send a leader (they can all fight only once per turn), it's a Major Battle and they can also add tableau cards to their current battalions. The battles can brutal, and they can also be literally do-or-die once a couple of armies are closing in on Quebec.

The French also get a number of action points per turn based on the total command of the leaders in the tableau. These are spent to attack, build forts and trading posts, assign replacements and play cards. Using these wisely is critical because they are so limited, and choosing to build a fort at the right time versus launching an attack can mean the difference between winning and losing.

There's a nice, even tempo to the game that escalates. Cards might be discarded or recycled to come back later and shifting leadership on the English side keeps you in a reactionary state throughout. It's hard to get initiative to drive them back in earnest, but when you get a foothold it's hugely satisfying to send them packing. Once Montcalm enters the game, you've got a huge advantage (so much so that there is a variant to tone him down), but you never know if he's the last card in the deck…or if you'll topdeck him next turn. By the time he shows up, Wolfe and the boys might be on your doorstep.

So obviously, there is a large degree of randomness in the game as is usual for States of Siege. I do not view this as a negative, particularly in a solitaire context. A random draw or bad roll might be tough to recover from, but you'll not find that your strategy against another player is thwarted by luck rather than smart play. And the randomness adds a degree of drama to the whole affair that keeps you on your toes, constantly guessing and second guessing what is going to happen and trying your best to mitigate it at every turn. If you get totally boned 20 minutes in the game, it's up to you if you want to reboot and give it another shot. Or pack it in for another day. You're alone, and not entertaining guests here.

This is a good one, but I still prefer Zulus and Cruel Necessity over it. I feel like those games are more dynamic and have a stronger interface between their subject matter, scope and mechanics. I'd call it "entry level", but it is still a little squirrely in the rules even before you add in the host of chrome-y optional rules, most of which I would recommend after a couple of outings. It is also pretty hard to win especially for a newcomer to this kind of game, and the capricious difficulty level might be off-putting to some players. But hey, there again, it's a solo game. Play it how you want to play it. Adjust according to what makes it fun for you.