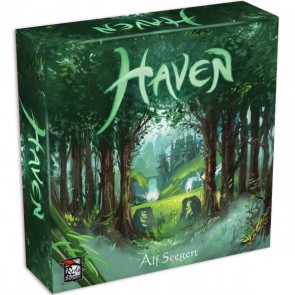 Either save paradise or put up a parking lot.

A friend of mine once made a comment about how publisher Red Raven’s games can feel like they’ve had their edges sanded off, and while I’m generally a fan of their work I understand what he meant: even at their fightiest, these games are usually gentle affairs, rarely punishing players too badly for losing a conflict or getting outfoxed by their competition. This is why Haven, Red Raven’s recent small box two-player game, surprised me. On the outside, it looks like business as usual: Ryan Laukat’s immediately recognizable art style is as charming as ever, giving the whole thing a peaceful, fairytale vibe. But the game itself, designed by Laukat’s occasional collaborator Alf Seegert, is a zero-sum struggle, a confrontational tête-à-tête comfortable with direct blows. This is war! In a slightly abstract sense, at least.

Haven is about the struggle between the City and the Forest, whose forces are trying to both take control of key spots on the map and collect enough lore to acquire the patronage of powerful elementals (and the big end-game victory point boosts they provide). The game is split into two distinct parts: the aforementioned map, which provides a large-scale overview of the territories the players are trying to capture, as well as three stacks of lore tokens that represent individual areas of conflict. Three elemental standees track the position of these battles on the map, meaning that while there will always be three struggles going on simultaneously, their value and importance change as the game progresses and the board state shifts.

Turns are quick and meaningful; most of the time they’ll see a player playing a few cards in an attempt to influence one of the three battles in play. Each player has three (slightly asymmetrical) decks of cards: Seekers, Offerings, and Lore. Seekers represent a player’s “troops,” and they accumulate in each battlefield, lending both their lore strength and their combat value to their side’s total. Offerings act as timers for each conflict—after three have been played to any conflict, the battle will resolve, players will tally their troop totals and clear the field, and the battle will shift to a new area on the map. Finally, Lore cards offer special abilities that can alter the state of the game in meaningful ways. For example, you may be able to cause a rockslide, preventing your opponent from placing any Seekers at a location until they spend an action clearing the debris.

For a game with a relatively small footprint and short playtime, Haven can take a little while to “get.” Each battle is being waged with two currencies simultaneously, with each offering different rewards—a lore victory will net you a token (worth a VP) that will help you win the favor of one of the elementals at the end of the game, while a combat victory will let you claim the contested location on the map (also worth a VP) and work toward a territory control bonus at the end of the game. Between these related-but-separate goals, the complex interplay between the contested Lore tokens and the map board, and a turn structure that’s a bit finicky, Haven can keep players at arm’s length as they stumble through the first few turns.

Give the game a little time and patience, however, and it will reward you mightily. For me, this happened about halfway through my first session—the disparate elements of the game clicked together in my mind, and I could see how the different systems work together to deliver a tactical experience that punches way above its weight class when it comes to meaningful decision making. Gameplay is simple—you play a card or get rid of card. Easy, right? However, the shifting conditions surrounding this card play mean that decisions are rarely anything less than agonizing, in a delicious sort of way. You’re constantly sweating, but you’re happy about it (which is what I imagine exercise is probably like).

This painful joy is amplified by the way Haven embraces a certain kind of chance. Given that conflict is deterministic, it would have been easy for this game to fall into the sort of mathematical morass that rewards players who approach games like a solvable algebra problem. Instead, it muddies the water by introducing both bluffing and push-your-luck elements into the mix.

For example, you can play Seeker cards directly from your hand to a battlefield face down, making your opponent guess what you’ve just committed. However, you don’t always have a useful Seeker available in your hand. No problem! The game gives you the option to play a Seeker from the top of your deck, with a serious caveat—you have to declare which battlefield it’s going to first, and then you play it face up. This not only gives your opponent valuable information, but there is a lore limit baked into each conflict—exceed this number when a battle is resolved and you effectively “bust,” immediately losing both the lore and combat conflict. These elements of uncertainty and desperation allow for moments of high drama in a game that might otherwise tend toward the dry and thinky, creating a space for guts and instinct to weasel their way in next to thoughtfulness and calculation.

For all its successes, Haven isn’t perfect. Remember how I said Red Raven games tend to sand away rough edges? While Haven is comfortable with conflict, a bit of that spirit makes its way into this game with some “catch up” mechanics that tend to mitigate losses and ensure that each match is (perhaps artificially) close. This kind of manipulation can blunt the drama of big moves and meaningful events, reminding players of the gaminess at play in their game.

However, these moments, where you can see behind the curtain to witness Seegert pushing levers and pulling strings, don’t significantly detract from what is generally a tense, exciting experience. It’s easy to recommend Haven as a meaty two-player duel that outperforms many of its better-known (and often pricier) peers with a winning combination of heart and smarts.

May 08, 2019
Rating
4.0
Haven
Haven is a meaty two-player experience that outperforms many of its better-known (and often pricier) peers with a winning combination of heart and smarts.
A
AndrewMcAlpine Top 50 Reviewer 24 reviews

Joebot replied the topic: #296872 09 May 2019 14:16
I've played this game a bunch, and I agree completely with your review, especially the "finicky" game turns. You really have to do the steps in just the right order, especially in regards to the "play immediately" Offering cards which break the normal turn order.

Being able to bluff by playing cards face-down is the secret magic ingredient in this game. It's fun when you're stuck with a seemingly useless card with a value of 0. Plunk that sucker face-down, then watch your opponent squirm and sweat.

I'm an unabashed Red Raven fanboy. I love their games, and I love Ryan Laukat's art style. But I do agree that their games have all the rough edges sanded off. I find that makes them perfect games to play with my 9-year-old son.
Read More...