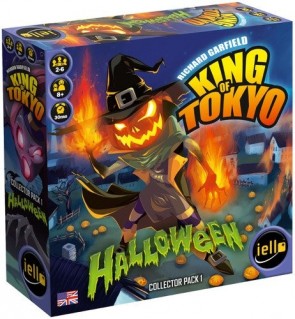 350 Foot Tall Monsters in Halloween Costumes? Are you kidding me? This is where I draw the line...oh, wait, nope. It's still silly, random fun.

Two New Monsters, a new set of chunky orange dice (Cause Halloween), and some costumes from the Biggest and Tallest Store. I hope you don't take you kaiju too seriously, because Iello put their thumb on the silly scale with the Halloween Expansion.

The costume cards are one of the main attractions in the Halloween Expansion. Behold, mere mortals, the sight of Cthulhu in a Clown Costume. All Hail Cyberkitty in a Cheerleader outfit (Back off, Furries)! The costume cards don't require the Power-Up expansion and are simply shuffled into the main deck of purchasable cards. Just a word of warning: Make sure you get the Halloween Expansion that matches what version of King of Tokyo you own: The card backs were changed from 1st Edition to 2nd Edition and if your version doesn't line up with the expansion version you get, the costume cards are going to stick out like the proverbial sore thumb. You can purchase a Costume any time they come up in the tableau and they have attractively cheap prices. This is balanced by the fact that if another monster roll three Paws, hits you, AND have the card's cost of energy in their possession, they can choose to rip the costume off. It's not exactly “Stealing” since they have to pay the energy cost for it but anyone who has built a strategy off of the costume they picked up is rarely going to thank you.

The costume powers can be fun and devastating, with the Clown Costume allowing you, if you roll one of every die face, to change them ALL to anything you want. Or the Cheerleader outfit allowing you to “Cheer on” another player, adding one damage to their attack.

Also in this expansion are Two new monsters: Pumpkin Jack and Boogey Woogey. Playing with the KOT Power-up expansion, both have a Trick or Treat twist of giving monsters they interact with a “Gift.” The Gift evolutions are not nearly as pleasant as they sound. It's more like getting the flu and passing it around to everyone else (except that Patient Zero is immune to it). For Instance, Pumpkin Jack has the “Ignis Fatus” Evolution that causes whoever his has “Gifted” the card (by hitting them) to get one less re-roll. Boogie Woogie has “I live under your bed” which causes the “Gifted” monster to roll one less die. Iello did sort of go back to the Gift well with King Kong's specific “Beauty” card that passes around Fay Wray like a hat at a convention of buskers. But none of the Character Packs released after the Halloween expansion include any Gift evolutions. Maybe this is because, if you are playing a two-player game, neither of the included characters “Gift” power-up cards really work “well” in a simple back and forth (The Cheerleader costume I mentioned earlier is useless in a two-player game). Granted, some of the other Evolution cards don't work at all in two-player games (Cyberkitty's “Take over Tokyo if it is empty” card comes to mind) but it feels like Iello moved away from the Gift evolutions for a reason.

Oddly, the first edition of the Halloween Expansion came with a promo card for King of New York (The 55 Central Park West card) BUT Boogey Woogey and Pumpkin Jack do NOT come with King of New York Power-up Cards. This ranks up there with the mind-boggling decision not to include Power-up cards for KOT characters with any KONY release. Iello might need to step up their Fear of Missing Out game, those are a couple of chances to manipulate me that slipped by.

Rating this expansion is difficult. I use it all the time, I adore the nail-biting tension of being a Zombie who can not technically die when reaching zero hearts but also dreading every roll where three Paws and four Energy can rip (and R.I.P.) the costume from you. And Devil costume that adds the extra thumping power is one of my favorites. But the truth is that, out of everything released for King of Tokyo, it sits at the bottom of my “You should get this expansion” list. The lack of compatibility with King of New York Power-up also helps drive a stake into it's horror-themed heart. Don't get me wrong, I like this expansion but, for pure bang-for-your buck at any player count, the other King of Tokyo expansions should come first.

May 10, 2019
Rating
2.0
King of Tokyo Halloween Expansion
The truth is that, out of everything released for King of Tokyo, it sits at the bottom of my “You should get this expansion” list. The lack of compatibility with King of New York Power-up also helps drive a stake into it's horror-themed heart. Don't get me wrong, I like this expansion but, for pure bang-for-your buck at any player count, the other King of Tokyo expansions should come first.
W
WadeMonnig Top 10 Reviewer 195 reviews

quozl replied the topic: #298627 19 Jun 2019 10:46
I disagree. This is King of Tokyo's best expansion. Power Up cards slow the game down. The costume cards here are a lot of fun and it's really handy to have an extra set of dice. #1 expansion recommendation for King of Tokyo.
Read More...