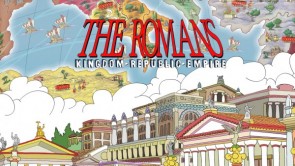 The chit-chat dies down, replaced by expectant faces all around the table. Fingers fiddle with baggies, lips smack over a beer but still, the sense of anticipation hangs like a crouching cat. They're waiting for me to help them make sense of the jumble of cards, chits and lovely legionnaire meeples by explaining some rules. Which I have read, of course. It's only now, with all eyes on me, that I realise I can't match the pieces on the table with the words in the book.

Cue the awful embarrassment of having to read them out to the assembled gamers like they're a class of primary school kids. Fortunately, it doesn't take long before I spot my fundamental mistake. The rules for The Romans read kind of like a "waro" hybrid and kind of like a Latin version of Britannia. What I hadn't realised is that rather than everyone playing on the same map, each player has their own.

We're running our own alt-history of the Roman empire in parallel, to see who can do it best. In each province on our maps is a random, face-down native army to conquer. In the far-flung corners of Britannia, Mesopotamia and Germania there are random face-down triumphs to be won for bonuses. To do it, all we have at the start of our meagre Empires are a few resources, one legion and four senators.

Working out how to leverage these scraps into building better things is our immediate focus. Getting much done in The Romans means committing a senator, from level one to four, to a building or an army. The higher level they are, the better the rewards. The trouble is that using a senator in a building costs resources, of which we have few. So does buying legions. But to get more resources, we need foreign territories. Catch XXII.

I, though, have a dilemma. Each turn a random province offers extra points if you can conquer it. This turn mine is overseas, so I also need a boat. That means extra gold and an extra senator to commit to building one. Which in turn means less soldiers and a less able general. I decide to take the risk.

The first player goes for the combat dice but I have to explain to her that she's not rolling for herself, but for everyone. We all make an initial move on our maps, and then she rolls two dice. We all use the white one and the enemies we're fighting use the purple one. To the value, we add our leader bonus and the number of legions and they add whatever's on the native counter that's flipped over. I get unlucky and find my feeble force up against a tough foe. I can almost feel my buttocks squeezing on the chair. Then I get lucky: Rome rolls high and the natives roll low.

Everyone else is trying to conquer Italy first as doing so lets you use Gods to get bonus building effects. We all make a second move now, leaving one legion behind to police the conquered populace. And again I get lucky. That's my campaign over as I'm out of armies. Everyone else carries on, to groans of despair and cheers of victory as they flip their native counters. But there's a real camaraderie, a bonded love or hate, of the balanced arbiter that is the shared dice roll.

Second turn and there's a new knife to twist in each other's backs. We still need soldiers, but we can also now use a senator in a building to collect tax. With a clearer eye for the game, flow, though, the joyful jockeying over position begins to feel a little cynical. We're each telling our own story of how the empire grew, yet we're fighting for shared spots to spend resources. It's a strategic sleight of hand that feels forced and hollow, however much depth it adds.

After we've all expanded our empires by campaigning, the natives get the chance to bite back. They spawn soldiers in a random province and march toward Rome. First turn they didn't do much, but in turn two they bite harder, removing my ownership of Venetia in the north of Italy. It'll be another turn before I get to use the gods.

By turn three my gambling for glory has paid off and put me in the lead, even though I have the smallest empire. That means I go last in turn order and players are getting the best slots for the senators first. In truth, though, it doesn't feel like I'm missing as much as I was. A new random building gets added to the game each turn, offering new effects. While it adds new tactics, it takes much of the heat and tension out of play.

Instead of bickering over placements, we're heads down, tallying up resources and gold. We make and revise plans, trying to see if we've got what's required to go for the most points. It's not easy, this, but it's oh so satisfying to get right. And there's still a danger that someone will steal a critical slot that I need and upset those careful calculations. Much as our empires have grown up into middle-age, it feels like the game has made us grow up, too.

Games are a fixed length and there are two turns left. As they pass I discover I have not grown up as much as I needed to. Later turns reward points for civilisation: for building cities and converting to Christianity. I've stayed a warlord and lost my early lead: the triumphs I've won don't quite compensate. Practice might make it a more viable strategy. I'm the master of all I survey, though, and I've gloried in those shared rolls more than anyone at the table. I regret nothing.

Next day, curious to see if I can grow up a bit more, I try the solo game. In this, you have just the one map, and the natives score points based on provinces you've failed to take. I try to refine that military strategy a bit, crushing the cute purple barbarian uprisings with ruthless brutality. To my surprise, solitaire play silences the more awkward thematic elements of the game. With one map and your senators no longer competing in a shared space, it feels like Roman history ought to feel. There's still plenty of numbers to crunch and dice to roll. Enough that the purple meanies manage to beat me by a single miserable point. Still, I've learned enough to give conquest another run in a multi-player session.

Ancient Rome has always fascinated me. On my first visit to the city, I stood in the ruins of the forum and fancied I could almost hear the echoes of the senators, quiet beneath the hubbub of tourists. The parallel histories of The Romans are too awkward to conjure the appropriate awe at the forerunner of Europe's civilization. Except perhaps, odd as it seems, those shared spaces. Bonding over the dice and backstabbing over the senator spots is a distant echo of the familial disputes that powered the Imperial dynasties. And if that doesn't do it for you, well, at least it puts its peculiarities to good use to deliver some rich strategic feasts.

May 12, 2019
Rating
4.0
The Romans
A quirky approach to history undermines the theme, but The Romans uses it well to deliver an interesting, innovative approach to conquest in a balanced and deep Euro-esque design.
MT
Matt Thrower #1 Reviewer 286 reviews

Vysetron replied the topic: #296949 13 May 2019 08:46
As far as I can remember I haven't played a Ragnar joint. This sounds really neat though. I tend to like a euro with dice more than the alternative.

Seems like a lot of games set in Rome have dropped recently.