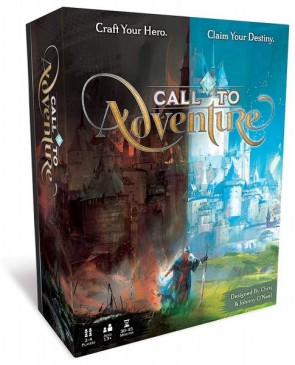 Whether it’s spending hours staring at a character creation screen or rolling dice for just the right stats, there’s something about creating your own character that is so satisfying. You can’t help but wonder where that character will go and what story will unfold along the way. Call to Adventure gives you the opportunity to distill hours of storytelling while comfortably fitting into a weeknight evening.

Structurally, Call to Adventure is more tableau-building than it is RPG. Players start with an origin and motivation card, which functionally just means variable starting traits. The top of each card has a mix of icons representing classic role-playing stats: strength, constitution, dexterity, intelligence, wisdom, and charisma. As you can likely guess, your choices throughout the game hinge upon going heavy into a few of these areas or spreading your skills around. Either way, your decision will affect how you successfully you attempt challenges.

Spreading across the center of the table are rows of cards. Trait cards can be unceremoniously grabbed and added to your tableau on your turn. That’s it. They don’t require you do to anything else. While it’s a nice way to boost your stats, it also feels like one of those compensation prize turns. It’s far more exciting to attempt a challenge, even when you know your odds of completing them are slim.

Challenge cards have two skill checks you can choose from: an easier and a harder one, each awarding different traits. Typically, your choice as to which to attempt comes down to number crunching more than theme, but you still can’t help but to declare your chosen path with vigor. In order to pass the challenge, you must successfully cast runes. Yes, runes. In perhaps one of the most unique totally-not-dice-but-still-has-some-randomness mechanics ever, you toss two-sided runes onto the table that match the challenge’s icons. Your own traits boost how many runes you can toss and, if you want to give into the dark side a little bit, you can spend some XP to add dark runes to your throw. (And if you’re wondering, a handful of runes is equally as satisfying to throw as a handful of dice.)

While the dark runes may cost you some corruption, the corruption track is not nearly as bad as it sounds. Thematically, it represents your hero’s morality and innocence, but in reality, it’s just another way to earn (or lose) points. This is a good example of how Call to Adventure puts very little at stake. If there was just a little more risk, the rewards would feel much better. As it stands, corruption is simply what determines whether you can play hero and/or antihero (i.e., action) cards. It has nearly nothing to do with your hero’s story of becoming good or bad.

Filing down the edges more is the way the game progresses. Once someone has added three level 1 cards to their tableau, level 2 opens up for everyone (and the same with level 3 afterward). The challenges on cards do get more difficult, but at least players aren’t left stuck, scrambling to catch up to the higher tiers. Even though this is an incredibly friendly way to do player progression, it does serve to keep the gaming moving along too. Plus, the luck of the runes may mean that someone behind can potentially catch up to others who moved ahead faster.

Call to Adventure feels like the game you you grab because your GM is sick on game night. Investment is low and the mechanics are simply a means to engage in a light RPG-esque experience. Without a doubt, the best part of the game is the end when, after adding up points, each player is encouraged to tell their hero’s story, hitting each ridiculous plot point fed by your traits and challenges. How did I start out a mere orphan who later became the heir to the throne? Well let me tell you! The fun in this makes up for a lot of the game’s otherwise middling experience. With a solid framework for plenty of expansions (some in the popular worlds of The Kingkiller Chronicles and The Stormlight Archive), Call to Adventure may end up being a pretty cool system down the line.

ubarose replied the topic: #297407 21 May 2019 09:28
I almost got to play this a couple of weeks ago. It was in the library at my FLGS. I started reading the rules and sifting the components, but then got invited to play something else.
Read More...