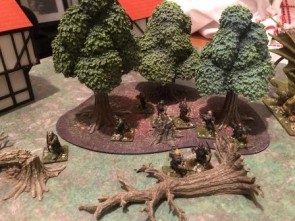 We've recently rethought our policies here at ThereWillBe.Games regarding coverage of Kickstarter products and we have begun to allow for advance features about games and accessories provided that we maintain our high standards of transparency, integrity, and honesty. [editor's note: Prior to now we have been reluctant to review prototypes and pre-production samples due to the fact that they were often of poor quality and did not acurately relflect the final retail product. However, do to changes in the industry prototypes and pre-production samples are now of a higher quality. Therefore, we have decided to change our policy and will review prototypes provided that there is reasonable expectation that they acurately reflect the final product.] The following article is an early look at samples of a product that is currently not available and as the campaign has ended, may only be purchased in advance by backers and late pledges at this time. It is expected to release at retail next year. Thank you to Monster Fight Club for supporting ThereWillBe.Games with these samples. As usual, we do not accept payment for any type of content but Monster Fight Club has paid for advertising at this site. Also, please note that the "Monster Adventure Terrain" currently featured in our advertising banners is NOT the same product as what I am previewing here

Monster Fight Club, a new company formed by a few former Gale Force 9 folks, is coming out with a new tabletop terrain option that I think is going to excite a lot of folks. It's Monster Terrain, a line of pre-painted plastic scenery pieces not unlike GF9's Battlefield in a Box products. The current offering is for some fairly generic (and I mean that in a good way) natural elements - trees, hills, and rocks with some woodwork pieces that can be used as bridges or barricades. And this stuff couldn't have come at a better time for me because I have specifically been in the market for some fairly generic, pre-painted terrain solutions to use with Dragon Rampant and Rangers of Shadow Deep.

What I was looking for was easy and inexpensive. And also at least pretty good looking without requiring a lot of hobby work- I don't do the foam block carving, flocking, and all of that. Although I love the Games Workshop terrain kits, I also didn't want something that looked specifically Warhammer and I needed something that was closer to true 28mm/25mm in scale. I also needed pieces that were easy to store and transport - anyone that has ever had to wrangle three or four Citadel Woods knows a special kind of pain.

When I opened the sampler box that Monster Fight Club offered me to cover here at ThereWillBe.Games, I had exactly what I wanted in my hands. What they sent me are production samples, so bear in mind that the final products are subject to change, but I would expect that what they eventually send out to backers and retailers is going to be very close.

Going through the assortment, I have a large, multi-tier rock outcropping with plenty of playable surface and tall enough to act as a large LOS blocker. I also have several smaller rock outcroppings - all of which can be sort of clumped together to make for larger rocky areas. These pieces are all nicely molded and painted well, if a little plain-looking. But if you wanted to add, say, some snowfall on the surfaces for Frostgrave it would be quite easy to dust them with some spray glue and snow flock. Or, you could put some sticky tufts on them to give them a little more dimension. I think they'd also be pretty easy to affix to bases if you are the sort that likes larger, more diorama-like terrain pieces. I like to keep them small and modular.

The trees are just brilliant. They are free-standing, and fully molded EXCEPT for the foliage. So they are barren until you put the foliage pieces over the bare branches, which covers them up and gives you a great-looking forest area when they are grouped. And you can take those foliage pieces right off to position models in the woods and around trees- you don't have to knock anything around or move them. They sit, optionally, on a thin neoprene mat to indicate the forest area for purposes of cover, and this small mat can also flip over to represent a pond that is maybe a little too darkly printed on my sample. The trees look very impressive- mine are the basic green, which is exactly what I would have chosen, but they come in a variety of color options for a more autumnal or fantasy look. I also have a few pieces of woodsy- some stumps and a couple of fallen trees that are nice cover for some archers or wizards. I really like these little touches as they create much more of a complete environment.

The other piece they sent me is part of the bridges and barricades set- it's a little piece of woodwork with some removable slats that you can set on its side for a wall or lay across a water feature as a bridge. Or you can position it between rocks for a sort of gangway. This set will also include steps, based on the photos. With a couple of these sets you could come up with a pretty cool mining area or some kind of on-the-water village, with some other pieces from other lines to make it come alive.

I'm using the Monster Terrain I have with other products and everything looks great together - consistent and properly scale. In the photos here, you are also seeing some MDF houses by War Worlds and Stratagem's Rushing Waters 2D Terrain Pack. The models are all by Northstar Military Figures from the Oathmark line with a Heroscape dragon and a couple of Reaper Ogres in the mix. Monster Fight Club is doing a series of neoprene playmats, but the one picture is not one of them - it's by GameMatz.

Here's why I think this is such a great product. It's not that they are offering prepainted terrain- that's been done. It's that this stuff is foundational and supremely agnostic. It will work with any setting or miniatures line, unlike a lot of the Battlefield in a Box stuff. But more importantly, because it is foundational, it also stands to help those who want to play tabletop games with scenery build up a set of basic terrain that will last for years and across many game systems without anybody ever having to hot-knife insulation foam or spend an hour gluing those $#@% foliage pieces back onto a Citadel Wood tree that got dropped. It's accessible and zero stress- and it seems to be quite durable, even the thin tree branches that I was initially worried about have enough flex to avoid breakage.

Like a lot of miniature players, I have a lot of terrain so I have to be kind of selective with what I bring in. But I am finding that Monster Terrain stands to replace some of the more fussy, fragile and frankly not that great looking pieces I have while supplementing the more specific items I have for Warhammer or Frostgrave. I like that a good, well-considered product is going to replace something largely inferior. With that said, those that have really nice, bespoke basic elements might not find as much value in this line beyond having something easier to handle and transport - but that is a benefit that makes it all ideal for to take these pieces to events or to use for in-store play where you might not want your fragile masterwork of a hill to get chipped up or crushed by some oaf dropping an old metal Warjack on it.

The folks at Monster Fight Club have a long history of supporting ThereWillBe.Games and myself as a writer and critic, so I have no qualms about endorsing these great terrain products after some hands-on time. I've been using them in every game of Dragon Rampant and Frostgrave I've played lately and expect that will continue indefinitely. Further, I'm looking at adding a few sets to my pledge. This is one of the better pre-painted terrain choices I've seen out there- great quality and a very reasonable price for ready-to-play scenery.

fightcitymayor replied the topic: #297551 23 May 2019 15:39
I realize pre-painted stuff is always expensive, but this stuff seems really expensive. A relatively sparse grouping of 5 stands for $180 makes my eyes water a bit. Then it ratchets up to 8 stands for $280. And to my eyes the pieces themselves look... good... but not great. Kinda blocky, kinda plasticky, kinda not particularly naturalistic.

So although it isn't pre-painted, i think I would go with Mantic's various Terrain Crate boxes. Cheaper, sharper sculpts, and you get a lot more for your $$$.

Sevej replied the topic: #297687 26 May 2019 08:47
I also think that this is very expensive. I understand though, the pros of having such trees, with most gaming trees have their flocks falling around. Their size is also massive (that is, correct in scale).

However, consider this: For $20-$30 bucks, you can get 25 trees, 3-6 inch high. Of course, this is the flocked pipe cleaner type. Make your own bases, and you fill most of your table with trees.

I agree this takes work (basing the trees also), but $40 for a copse of trees, they'd better be indestructible.

Sure, not as climbable as the one you reviewed, but they looks a lot nicer.

One thing I totally agree with you though, with GW moving away from standard grass mat, there's been a lack of easy, accessible generic terrain in the market.
Read More...