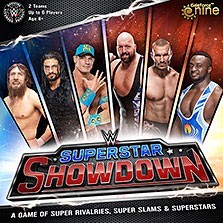 A look back at the greatest wrestling game that almost was.

If you disagree with any of the above statements, you may want to stop reading this review right now. Your ability to enjoy WWE Superstar Showdown will largely depend on one thing: your capacity to deal with nonsensical bullshit. Which is to say, if you’re an adult with some level of investment in professional wrestling, I think you’ll like it just fine.

This may sound like snide condescension, but I assure you it’s not. Professional wrestling, which has been around since the 19thcentury but really came of age in the post-war USA, is one of the great American exports of our time, sitting comfortably alongside jazz, abstract expressionism, and Kentucky Fried Chicken in our national hall of fame. I can already hear the pedants whining: “But Andrew, it’s all fake.” To which I say, of course. That’s the entire point.

What professional wrestling understands (and what Superstar Showdown leans into to great effect) is that authenticity is overvalued. The tall tale can be better than the truth. As a one-time high school wrestler, I can tell you that honest competition looks like a couple of people grunting and sweating on each other, while the balletic forgery of WWE offers a far more compelling vision of physical combat.

Much has been made of Gale Force Nine’s ability to distill the thematic essence of entertainment properties, and Superstar Showdown supports that reputation: this game understands the appeal of professional wrestling perfectly. At first glance it looks like any other miniatures-based combat game, albeit on a smaller scale. However, Superstar Showdown eschews the minutiae that can turn these tactical battles into a slog—you’ll find no dice, no long list of potential actions, and no catalog of modifiers to memorize.

Instead, Superstar Showdown gives each wrestler (there are six included in the box) a unique deck of cards that represents their particular set of moves and abilities. These cards handle movement, damage, and all other combat effects. For example, a Lariat card might instruct you to move three spaces and throw your opponent three spaces, while a German Suplex might do some damage and give you a bonus for pain you inflict later in the round. This card system helps tie the mechanical meat of the game to its thematic core—you’re not just moving two spaces and doing three damage, you’re watching John Cena perform a flying dropkick on Randy Orton. It just makes sense. It doesn’t hurt that each card features a photo of that wrestler performing the chosen move, making each deck feel like a true showcase of a particular personality.

Superstar Showdown’s most interesting and divisive design choice is the way these cards are played. It steals its main conflict resolution system from a very old game indeed: rock, paper, scissors. With a few important exceptions for special moves, each card has one of three types printed on it—either grapple, strike, or maneuver. Grapples beat strikes, strikes beats maneuvers, and maneuvers beat grapples.

At the beginning of a round, each player secretly chooses three cards from their hand and places them face down in the one, two, and three slots printed on their side of the board, essentially programming a series of moves. Then, each player reveals their first card simultaneously. Let’s say one player put down a grapple card while the other played a strike card. The first player wins the matchup, and everything printed on their card takes effect, while the loser discards their card and watches bad stuff happen to their wrestler. After the winning player resolves their card effects, both players reveal the cards in their two slot, and the process begins again.

While this may seem completely arbitrary, there are some underlying nuances that manage to keep this system from feeling entirely dependent on luck—for example, each wrestler has a different number of the three card types in their deck to mirror their real-life wrestling styles. Big Show has a lot of grapples and not so many maneuvers, while the nimble Daniel Bryan is the opposite. Paying close attention to the board state and your opponent’s discard pile can give you an edge as well. However, despite these added complexities, sometimes this game is steered by forces beyond your control. There will be turns where you masterfully plan a series of devastating maneuvers that falls apart completely on the first card flip (through no real error of your own). While I find this to be absolutely hilarious, there are folks who will play this game once and never, ever want to look at it again.

Superstar Showdown presents itself as a competitive game, but at its core it’s secretly a cooperative storytelling game. Every time you simultaneously reveal a pair of cards, it creates a delightful moment of suspense, and these moments accumulate to tell an entertaining tale in the form of fancied-up fisticuffs. It never breaks kayfabe outright, but there’s a winking quality to the game that undermines potential complaints. Oh, the game’s not fair? The more skilled player won’t always win? Well, so what? It makes critiques of the game’s randomness not so much wrong as irrelevant. The outcome may be rigged, but you will always put on a hell of a show.

It should be noted that there’s one thing missing from this game that would have elevated it higher in my personal pantheon: variety. The base game contains a handful of known wrestlers, a few different match types, and a whole lot of promise. It’s easy to imagine the ways this game might have developed, especially given WWE’s deep catalog of competitors and wild variety of events. Unfortunately, Superstar Showdown was abandoned almost immediately after the base game’s release, with all expansion plans quietly scrapped. It’s unclear what tanked the game—like lots of showbiz deals, it simply withered on the vine, leaving us to speculate and theorize. Regardless of the reason, the game we got just doesn’t go the distance. Given that individual matches rarely last longer than half an hour, I feel like I experienced everything this box has to offer in only a few sessions. The game doesn’t feel finished—it’s a tasty aperitif meant to prepare us for an entrée that will never arrive.

It’s strange to call a review of a game from 2015 “retro,” but in the fast-moving worlds of both wrestling and board games, WWE Superstar Showdown already feels like a relic from another era. Like so many aspiring wrestlers, this contender might have had its sights set on stardom, but it’ll have to content itself with cult status (hardcore enthusiasts can go online and find dozens of fan-designed wrestlers, but beware, you’ll need print-and-play chops to make use of them). I’m certain I will pull this game out every now and then to tell a few more dumb, brilliant stories, but it’s hard not to imagine what might have been.

charlest replied the topic: #297535 23 May 2019 10:30
Loved this game but really struggled to connect with the wrestlers on offer. Wish it was more of a throw-back and all-star lineup.

This exited my collection, but you know what stayed in? Luchador!

However, I’m also a big pro wrestling fan. Enough to warrant having this, Wrasslin, Luchador and Rumbleslam all on my shelf. I wasn’t a fan of the roster when the game came out, but I really like most of them now.

Damn shame we didn’t get more. I guess they had 30+ more wrestlers planned.

There is a user on boardgamegeek who came up with another 20 or so wrestlers and did a great job on them. He added new and Attitude era ones and it feels like a more complete game now.

san il defanso replied the topic: #297582 24 May 2019 04:45
I liked this game, and I've never been a wrestling fan. There were some marketing choices that probably didn't help this one though.

The wrestlers included were a big problem. I think the better strategy would have been to choose a couple of modern stars, like John Cena and Roman Reigns, and then plumb through WWE's history to get the others. Get Andre the Giant, Hulk Hogan, Macho Man Randy Savage, etc. More wrestlers would have been nice, but I think grabbing into the past might have brought on more people like me. I.E., people who never watched wrestling but remember particular personalities from pop culture when they were younger. There's an Epic Duels quality the game missed out on.

I also think the title is kind of a mouthful. I really think calling it Wrestlemania or Royal Rumble would have been the way to go.

It could have really used a better way to play with more than two people. The tag team method in the box was a little stupid. This, along with the wrestler choice, probably kept this from being played in my group more than anything else.

From a design standpoint I don't think there are many complaints. But I think the big one is the reliance on symbols to generate all the different moves. By this I mean that even though all of the wrestlers are unique, their moves all feel like matters of degrees different, rather than distinct. It's a similar problem to the Dominion base set, where every card was some combination of draws, buys, actions, etc. I think this one shouldn't have been afraid to throw in more cards with text to describe more unique moves.

Still a fun game. It didn't stick around for me either, but I do think wrestling fans missed out if they didn't grab it.
Read More...