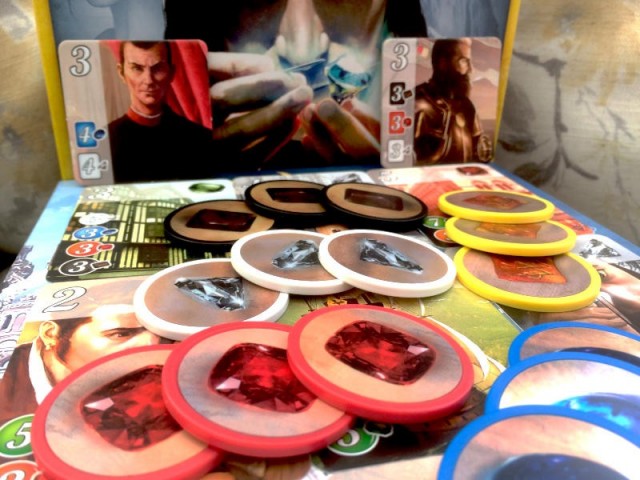 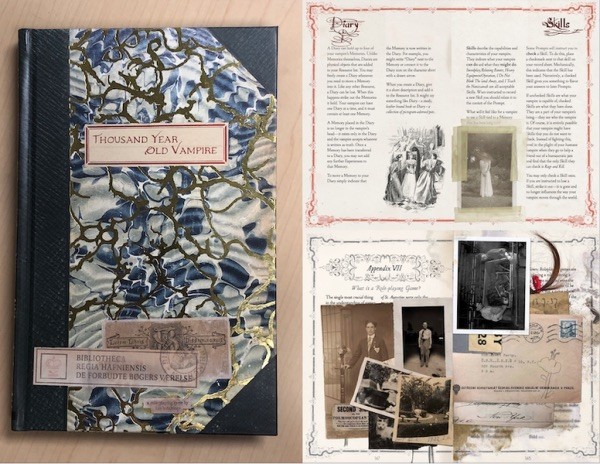 Into the Trees - The Weirding Woods of the Storymaster's Tales

Space Cadets: Away Missions in Review 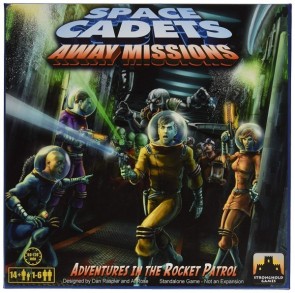 Dan Raspler and Al Rose want you to know that they love classic, golden age science fiction and Space Cadets: Away Mission is their statement of intent to rescue the genre (at least as far as games are concerned) from decades of dreary, dour, wartorn atmospheres and barely human space marine killing machines. SC:AM takes us back to a more optimistic era of rayguns and fishbowl helmets, of Saucermen and stern-jawed, crew-cut heroes. It is a very modern, very well designed dungeoncrawler with tons of miniatures, scenarios, AI opposition, dice combat, loot, et cetera, et cetera. There are 20 scenarios out of the box, and in each you’ll generally do pretty much what you expect to do in these kinds of games- shoot stuff, move/explore, pick up some new gear, flip a switch or two, exit to the shuttle before it all goes pear shaped.

Map tiles are hexes and they are laid out at the beginning of the scenario. The first thing you do on a turn is a scan, meaning that you flip an Alien token on one of the tiles closest to you to see what enemies it spawns or if an event occurs. You’ll get three actions, which may be limited to combat or non-combat ones depending on the character. Finite oxygen stores can be spent to take further actions in a clutch situation. Usually, you’ll be moving or shooting (it’s area to area) but you may also perform IQ actions, such as an analysis on an item or an attempt to subdue an alien Thrall or Brain-in-a-Jar through the power of human science.

Then of course, the Aliens get to go and they activate on a simple triage system that accounts for very different behaviors between the seven different types of enemies. Bugs will attempt to find others of their kind to form a swarm. Saucermen will keep distance and take potshots at the heroes. A Brain-in-a-Jar will attempt to control your character’s mind. It’s a similar system to AD&D Adventure System or Galaxy Defenders, but it’s streamlined here and more specifically detailed.

SC:AM is clearly not quite the most singular or unique concept out there, but I defy you to find a more heartfelt and affectionate game out there today. Of all the things I love about this game, it’s the heart and soul put into it by these gentlemen that matter the most.  It’s not quite a purist’s vision though, as it is still a post-Aliens, post-Space Hulk  “bughunt”. Trekkers take note- the only negotiations available with these Saucermen are to determine which one you blast first. And there is no red shirt- each hero is specialized and well-equipped to do battle with these extraterrestrial baddies.

But these guys also have a couple of tricks up their sleeve, and I think that those of you who might be shrugging off to get back to Imperial Assault or whatever ought to stick around because SC:AM manages to pull off a couple of fairly innovative, forward thinking ideas. First and foremost is this brilliant Overkill thing that I bet we’ll see turn up in at least five games next year. Combat is a matter of rolling a number of D10s corresponding to range. You score a hit if any of your dice are a 1, 2 or 3. Just one hit. But for each success in excess of one, you can perform an Overkill action. This represents a moment of heroism or an against-the-odds turn of events. Overkill options come from the character, the weapon being used or from the alien being attacked- and all of the above are different from element to element. This is a genius way to introduce an entirely new, fresh-feeling layer of decision making into this type of game. The aliens have overkill effects of their own- for example, a scary Sentinel might cause Terror if it rolls an Overkill, causing Rocketeers in its space to flee after a particularly brutal attack.

Another great idea, well implemented and totally on trend in the larger video gaming world, is crafting. The heroes might find schematics during their missions to clear out slave pens or explore UFOs, and to assemble the items they’ll need to find elements such as Alien Blood, Mysterium, and the wires the Saucermen use to turn humans into Thralls. I love that you find crazy alien tech and have to actually use science to sort out what it is, and then build it. This is another example of a fresh, forward-thinking idea that feels really unique in the genre.

I’m also in love with how this game paces itself. There’s no doom tracker or anything like that. Instead, that beginning-of-turn scan action sets the pace. Because each turn, more aliens are spawned and it becomes a struggle to complete the mission objectives while also managing the rising opposition. It feels like most games have a break point where the heroes either get overwhelmed or get things under control. If all of the alien tokens are explored, the game kicks into a “Red Alert” state, which is generally bad news for the Rocketeers. There is a great sense of tension and urgency, which is yet another factor I’m not seeing in a lot of other dungeoncrawl style games these days.

Then there are the little narrative bits that distinguish it. Like how you can rescue a Thrall and it turns out to be a harmonica-playing hobo that stuns the aliens or an estranged brother of a Rocketeer, who will take a hit for their sibling. I like the range of equipment available and the wide variety of specialized effects- like how if you want to harvest alien blood, you’d better bring an Air Knife. The scenarios are mostly fun, easy to set up and provide lots of exciting moments, laughs, and challenging situation.

I think Space Cadets: Away Team is a total win. It’s charming and fun with a couple of progressive ideas. It looks great, plays smoothly and offers plenty of diversity for return engagements. It’s in a crowded market as far as games of this type go but among the competition, it’s one of the best available.

VonTush replied the topic: #217141 11 Dec 2015 10:17
For me it's simply what I want to play compared to what gets played.
Would I rather play Chaos in the Old World? Yes.
Does my current gaming situation provide that opportunity? Consistency? Repeated plays? No.
Therefore Blood Rage is a better fit for me.
The fact that it is a damn fine game is icing on the cake.

Relating to SCAM - The other night I soloed the first mission to refresh myself on the rules. Ended up with the Sentinel at the north tip of the board stuck behind two doors, trapped in there, seething as his friends were blasted around him. After I cleared out the rest of the map I gave a few blaster rifle shots through the door using my X-Ray Goggles wounding him, reset the turn, opened the door and rained death onto him. It was just an odd game state and a bit of a busted session. Still fun and over the holidays I hope to keep this setup on the table to over the holidays and setup on the table hopefully saving some setup and take down time (the only downside to the game).

Columbob wrote: Ha! By the end of the review, the game's title has Evolved to SC:AT!

Dammit Barnes, I knew you would zing us somehow!

VonTush wrote: Relating to SCAM - The other night I soloed the first mission to refresh myself on the rules... I hope to keep this setup on the table to over the holidays and setup on the table hopefully saving some setup and take down time (the only downside to the game).

Very happy to hear folks are enjoying the SC:AM (and thanks for the great review, Michael), but listen: no gamer has any reason to play that starter scenario twice. It's strictly for newbs who have never heard of range, line-of-sight, or hit-points.

Gamers of your experience and knowledge should leave Mercury dwindling in your rear-view space-mirror and proceed directly to Venus and the Escape from the Slave Saucer mission. Honest! The extra 5 minutes of set-up time is well worth it.
Read More...