Xia: Legends of a Drift System in Review 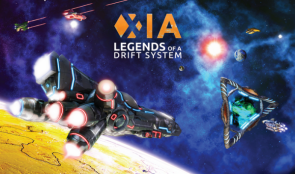 At first glance, Xia: Legends of a Drift System sort of looks like another entry in the 4x space empires sweepstakes. But it’s really closer to something like Merchant of Venus or Gale Force 9’s Firefly game. Like those titles, it’s a pick-up-and-deliver game with both mercantile and adventure gaming elements It features a strong “open world”-style emphasis on allowing the player to chart their own course through options that include good honest work as well as criminal enterprise, exploration as well as material advancement. The goal of the game is to set out in a starter spacecraft and earn the most fame points by the end of the game. And how you get them is really up to you.

Far Off Games and designer Cody Miller have already earned a couple of these fame points because Xia is a very nicely produced game with some fun components. The game ships with 21 fully painted (hooray) spaceship miniatures, each one a unique sculpt. They look great on their stands and add a nice touch of character to the game. The money in the game is custom, triangular coins made of metal in two colors. They are certainly a luxury-class addition that has absolutely zero impact on gameplay, but it’s a nice touch. It’s a somewhat expensive title but the quality overall is high, especially for a Kickstarter title.

And she does got it where it counts, because the game is exciting, fun and much more accessible than I expected after reading through the rules. At first I thought it was going to be quite complex, but the reality of it is that the design is pitched at the lower end of rules weight despite the level of detail. There are three tiers of upgradable ships with upgradable components. Concerns include cargo portage, energy management, asteroid/debris fields, nebulas, planetary shields, resource mining opportunities, blind space jumps, multiple types of goods, warp gates and bounties for lawbreakers. There are NPC ships including a pirate, a cop and a travelling merchant. To top it off, there is also plenty of PVP. There’s a lot going on in Xia, and it creates a sense of world-building as the game plays out and the narrative develops through player choices and a few random turns of event. 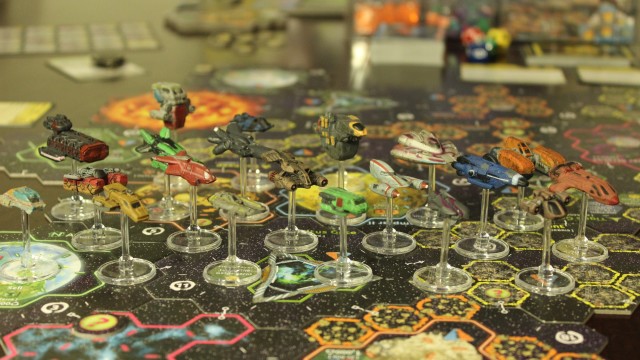 But it’s a simple, focused design that actually has an admirable degree of restraint despite the open-ended, sandbox approach. It’s definitely not one of those dreadful kitchen sink designs that plague Kickstarter these days. It’s all about piloting a unique ship through this developing environment and looking for opportunity while improving your ability to complete tasks. Each ship, in addition to a couple of special abilities and some variance in capabilities, has a grid depicting its available space. When you buy components, you fit them in Tetris-like. Each component- including engines- corresponds to a polyhedral die. The lowest grade engines let you roll a D6 to move and the upgraded ones a D8 but at the cost of requiring more space. This system runs through all of the ship components- the combat suite of guns, missiles and shields included.

Everything runs on an energy management system. Your ship has a couple of energy cylinders that must be “armed” and then placed on components to activate them. So to make those D6-powered engines go or those low-power peashooter lasers, you have to have the energy to do so. And if you run out of power, you might find yourself running on backup impulse power, limping back to a planet to refuel.

Expect to tool around the modular, hex-based map tiles looking for planets at which you can pick up or drop off cargo (provided you have room) while also taking your chances to navigate hazardous areas or mine them for resources to sell at a profit. If you go to a sort of “quest dispenser” spot on most of the tiles, you can draw from a job deck to take on a task that will yield fame points or credits. You might also find exploration tokens that give a little fame or financial bonus. Maybe you’ll run afoul of that NPC pirate ship that pops out to shoot at you and then runs away. Or maybe you will BE the pirate, taking on a job to steal from another player, and you wind up on the run from the authorities after sacking the merchant ship, looking for somewhere to ditch stolen goods. If another player doesn’t hunt you down first to claim the bounty on your ship!

Most significant actions in the game yield fame points, including destroying or upgrading ships and delivering cargo. I especially like that a player can get a point for “rescuing” an out-of-energy ship by going out to the stranded player and giving some energy. I accepted this charity from a fellow spacefarer in my second game, only to find that he had a job to rob me. Once a player moves his marker up to certain break points on the fame track, Title cards are drawn from a deck and these are achievement-like objectives that anyone can claim when eligible. So the game doles out additional opportunities as it plays out, and it’s up to you to determine if they are worth pursuing.

The game plays out to a sort of customizable length, which is good because if you play to higher fame point values it can drag out beyond its welcome. It, like some of its predecessors, plays best with three and worst with five. There is a sense of repetitiveness that starts to creep in after the 90 minute mark that I’ve found makes a good case for an expansion adding content by way of the job deck, ship components and the available space tiles. It isn’t that the game feels limited; it’s that it feels like it could take on more variety and a broader scope without suffering from bloat.

But even at two hours, I really like Xia a lot and I think among the games in its class, it’s actually more fun to play. Some of this, inevitably, is because it’s just so easy to set up, play and enjoy. It has a very unique sense of featuring a lot of specificity but hewing closer, mechanically, to lighter, more family oriented fare despite its length. I don’t have a fancy, brainy reason for liking this game so much- I don’t think it changes the way we play games and it doesn’t offer a sweeping case for games-as-art, nothing like that. It’s just plain fun to set out in a junky little ship and work out ways both fair and foul to get famous, get rich and get into better craft.