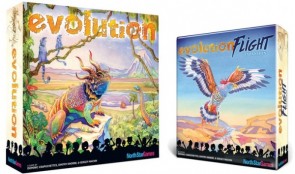 Dominic Crapuchette’s Evolution is one of my favorite card games of recent years. Working from a design originally developed by a pair of Russian scientists, Mr. Crapuchettes has created a compelling, highly interactive game that creates a unique biosphere of competing or synergistic animals every time you play it. The themes of adaptation, survival and the co-existence of species are writ in bold face across the entire game. The mechanics are simple and accessible but the combinations of traits that your animals can take on results in an appealing sense of complexity and depth. But it is also the kind of game where it is easy to want more. Specifically, I found myself desiring more traits, more cards, to expand the possibilities of the game. It’s not that Evolution isn’t a complete experience out of the box, it’s that it’s the kind of game that feels open-ended in its potential.

Flight is the first and hopefully not last expansion for Evolution, and as you are likely to suspect it adds flying animals into the mix. And with wings come some new considerations that give players more options and slightly increase the strategic complexity. But more importantly, flying animals serve to expand the core themes of the game and allow for even more diverse species.

The expansion includes new, blue species boards for flying species. To start one, you’ve just got to discard two cards instead of the standard one required to pay for a new animal. Flyers come with the Flying trait card built-in, which limits them to just two other traits instead of the usual three. But staying aloft ain’t easy, and each flying species you control has to pay an upkeep cost in food based on their body size so they effectively need to eat more than land-based animals. Here’s the kicker- the extra food that they consume doesn’t go into your victory point bag.

Flying species can eat plant- or meat- based food like all others, and for the vegetarian varieties there is a new Cliff tile where they can grab a bite to eat. It refills each turn based on the number of players. More aggressive players will be happy to hear that flying carnivores are now a thing, and in addition to the usual parameters involved with eating someone else’s animals these winged terrors can also discard a card from hand to counter traditional anti-carnivore measures such as Symbiosis, Warning Call or Climbing. They’ll swoop down and snatch that climber right off the branch.

There are a few new trait cards that work with the Flight trait as well as with any other species you care to create. Brood Parasite encourages players to have multiple Avians and Nesting provides some meat food every time a flyer increases in population. There is Good Eyesight for the early bird seeking the proverbial worm and it is a requirement for a bird-of-prey to attack a species with the Camoflauge trait.

There is one new element, but it is fairly limited at this stage. There are two event cards- Dive Bomb and Seed Dispersal- that are played out of hand during the cardplay phase. The former allows an Avian to eat early, including another species if it’s a carnivore. The latter puts food in the watering hole equal to the number of birds in play.

As is the case with the base game, the card effects all connect right back to those core themes. Everything makes logical sense, and as a result the story the game generates is not only of your particular species but also how this particular biome you create functions. Some animals thrive, some carry on strong and steady, some falter and some never make it past a flying carnivore’s dinnertime. And when you look at the cards played, the effects that happened and the choices that were made a rich narrative line emerges that deftly illustrates the principles of evolution and adaptation.

This is a very nice expansion and it is one of those add-ons that has more or less obsoleted base game-only play for me. The additions are seamlessly implemented and are consistent. The same great illustrations and production design follows through. It is definitely better for seasoned players as the flying species introduce another couple of factors to consider, and the upkeep mechanic changes the dynamic (and priority) of food distribution. But I think that most players will want to shift to permanently adding Flight after a few games of the core title.

In the rulebook for Flight, it is stated that Evolution is “evolving into the Evolution Game System” and that NorthStar Games plans to support it for the next ten years and according to the press release I just read they are also putting ten million dollars into the product line. I certainly hope this is the case because I want to see where this game can go. It would be natural to expect an aquatic expansion next, but in the future I can imagine expansions with specific terrain, weather and other factors. More, please.